A collection of interviews, conducted by Luke Holland and his associates between 2008 and 2017, about the ‘Third Reich’, the Second World War, and the Holocaust. 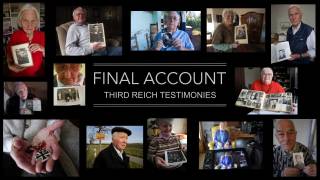 This archive contains life story interviews with men and women in several countries, including Germany, Austria, France, the Netherlands, Belgium, Paraguay, Argentina, Romania, Spain, and Ukraine, about their memories of, and involvement in, the so-called ‘Third Reich’, the Holocaust, and the Second World War. It comprises of 295 filmed interviews, around 500 hours, with 274 elderly men and women born between 1905 and 1934, mainly Germans and Austrians, who occupied a range of positions on a wide spectrum of complicity. The collection was created by Luke Holland between 2008 and 2017.

The collection’s individual and group interviews allow unique insight into recollections of everyday life in Nazi Germany, and post-war reflections on responsibility, complicity, and justice, of ‘ordinary’ people who were implicated in, witnesses to, or on the periphery of war and genocide. The collection includes accounts by former members of the SS and Wehrmacht, secretaries in National Socialist and military organisations, alongside farm workers and homemakers.

The archive Final Account: Third Reich Testimonies has been made available by the Institute National de l’Audiovisuel (INA), UCL, and the Wiener Holocaust Library on behalf of ZEF Productions Ltd.

Access to the UCL repository holdings is currently closed. However, access to the collection will be available through a dedicated space on the Institut National de l'Audiovisuel (INA) professional video platform. Within the framework of the intended use of the archive, the collection can only be used for the purposes of research, education, and memorialisation.

The collection is protected by copyright and access is controlled and restricted. Prospective users are required to complete the user declaration form and forward to s.rauch@ucl.ac.uk Once your application has been approved, an appointment will be arranged for you to access the platform.

For UCL registered staff and students, access to the platform will available on a dedicated machine at UCL Special Collections Reading Room. UCL staff and PhD candidates can apply for remote access.

For non UCL members, access will be available at the Wiener Holocaust Library in London, or at the Institut National de l'Audiovisuel in France.

Luke Holland passed away on 10 June 2020. He was a documentary filmmaker, whose work includes the 5-part BBC Storyville series A Very English Village (2005), and the films I Was a Slave Labourer (1999), More Than a Life (2002), and Good Morning Mr Hitler (1993). His mother was a Jewish refugee from Vienna. He spent his childhood in the 1950s in the Bruderhof, a German-speaking Christian community in Paraguay.1 In 2020, Holland’s film Final Account, in large parts based on interviews in the Final Account: Third Reich Testimonies collection, premiered at Venice Film Festival and was released in the US in spring 2021.

Final Account: Third Reich Testimonies is a major oral history collection. Created between 2008 and 2017 by Luke Holland, Final Account: Third Reich Testimonies comprises of 294 filmed interviews, around 500 hours, with 274 elderly men (150) and women (124) born between 1905 and 1934. The interviewees are mainly Germans and Austrians, who occupied a large range of positions on a wide spectrum of complicity in the so-called Third Reich.

The collection’s individual and group interviews allow unique insight into recollections of everyday life in Nazi Germany and Austria, and post-war reflections on responsibility, complicity, and justice, of ordinary people who were implicated in, or on the periphery of, war and genocide. The diverse collection includes testimonies by former members of the SS and Wehrmacht, secretaries in National Socialist and military organisations, alongside farm workers and homemakers.

On the whole, these men and women do not represent the type of ‘ordinary perpetrators’ intensely studied in the perpetrator research of the last twenty years, i.e. those who were actively and evidently (as established through legal investigations and trials) engaged in ordering, organising, or carrying out mass killings (such as formers members of SS Einsatzgruppen or reserve police battalions). They fall into a much more contentious grey area of wider complicity and perpetration.

Conditions Governing Reproduction and Use: The entire collection is protected by copyright and the personal rights of the interviewees, the interviewers, ZEF Productions and the Operator (INA / UCL / Wiener Holocaust Library). The metadata of the collection as well as the corresponding software are protected by the copyright of the Operator. Within the framework of the intended use of the collection, students and scholars may only use the collection for research, education, and memorial purposes. In accordance with and within the limits and the framework of Copyright the GDPR, citations are permitted in independent works. The source is to be cited with every citation. Researchers are not permitted to make copies or recordings. Any requests for reproduction of audio-visual material in publications or documentaries must be directed to ZEF Productions Ltd.

Physical Access: Researchers can access the collection at the INA, UCL (UCL staff and students only), and the Wiener Holocaust Library’s facilities through a dedicated space on the INA’s professional video platform.

Use of the Collection

Within the framework of the intended use of the collection, researchers may use the collection for research, education, and memorial purposes. Access to the collection through a dedicated space on the INA’s professional video platform inamediapro.com is controlled and restricted.
Prospective users are mandated to sign a User Declaration. The entire collection is protected by copyright and the personal rights of the interviewees, the interviewers, ZEF Productions Ltd. and the Operator.

The user becomes the data controller. The user guarantees that those collection materials used will only be employed within the scope of these Terms of Use and in line with data protection laws (GDPR). All provisions must be adhered to in avoiding cases of misuse of the collection materials by third parties. In the case of misuse, the user will inform the Operator immediately and will support him/her in the case of court or out-of-court enforcement of his/her rights, provide necessary information as well as any documents or the like.

Claims for damages against the Operator independent of the legal basis are excluded. The Operator is not liable for the statements made in the interviews.

Personal data are collected in the application process for the use of the collection. This data is exclusively used for internal purposes and will not be disclosed to any third parties without the explicit consent of the user. With the use of the collection, the user authorizes the Operator to process, store, evaluate and use the data obtained in connection with the use of the collection in compliance with the data protection laws. The user has a right to obtain information as well as a right to correction, barring and deletion of his/her saved data. To exercise these rights or for any question about this processing, the user can contact our data protection officer or the department responsible for exercising these rights:

UK or French law applies depending on the location of the consultation. Place of fulfilment and exclusive place of jurisdiction is, as far as this is legally authorised, London / Paris. The Operator reserves the right to change or amend these Terms of Use and these changes will become effective in the future.