To celebrate International Women's Day (8 March), staff and students from across the Institute discuss what inspires them and what career advice they have for women. 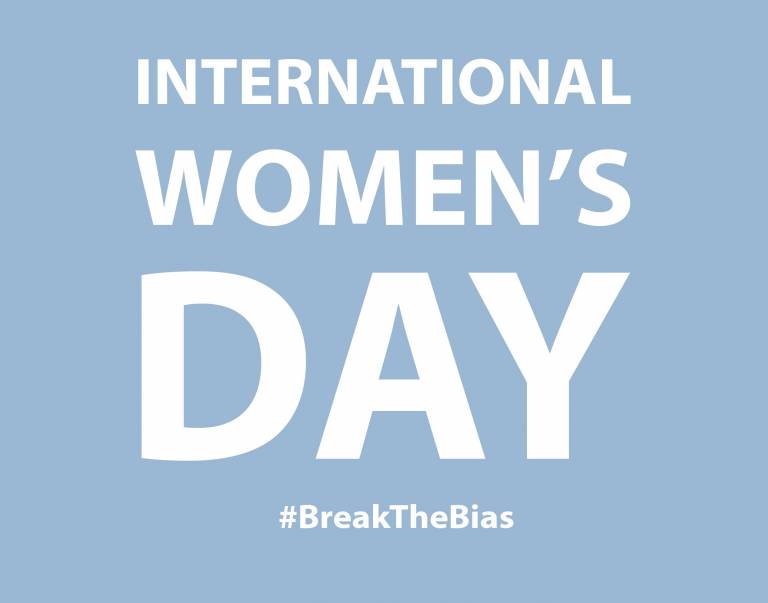 The International Women's Day is an opportunity to reflect on how far we've come to achieve gender equity in our society - but also to consider on how far we still need to go. There have been significant improvements in gender equity in UK Higher Education Institutions in the past decades - much thank to the engagement with the Athena Swan charter, guiding departments and institutions to address gendered inequalities in Academia. However, there is still a lot of work to be done - within our community and beyond.

Reflecting upon our progress, Laura Allum, IoN HR Manager and IoN Athena Swan co-Lead said: "Today we celebrate those women in ION that are so visible in both clinical and non-clinical research but recognise that we still need to do more to ensure representation and promotion of BAME women in science".

Gabriele Lignani, Principal Research Fellow at the Dep. Clinical and Experimental Epilepsy and IoN Athena Swan co-Lead furthered: "we still need to promote day by day actions to ensure a definitive cultural change to obtain gender equality at every career stage in STEM and in Higher Education Institutions."

Professor Helene Plun-Favreau, IoN Deputy Director for Equality, Diversity and Inclusion, added "I am delighted to see some of our colleagues celebrated for IWD. At the IoN we are committed to increasing the representation of women and other under-represented categories at ION, in order to improve academic and clinical excellence".

We interviewed 7 members of our community who lead by example of commitment, kindness and work ethic and help make IoN an inspiring workplace. We took this opportunity to learn more about what drives them, who are their female role models and what advise they would give to their younger selves. The impact of their actions and work, both locally and more widely, is truly inspiring.

Dr. Mie Rizig (Senior Clinical Research Fellow, Department of Neuromuscular Diseases) told us how she realized that there was underrepresentation of patients from African decent in Parkinson's Disease studies:

"Before embarking on my current research, I completed a postdoctoral clinical research fellowship for 3 years with Prof. Nick Wood at the UCL, Institute of Neurology, recruiting and characterizing a large cohort of PD patients with the rare LRRK2 gene mutation. During this time, I realized that—despite substantial advances in the genetics of movement disorders—almost no research had been done in patients from African decent including Black Africans and Black Caribbean - which led me to initiate my current research project."

She has led the International Parkinson’s Disease Genomics Consortium Africa, an international collaboration of neurologists and neuroscientists who aim to "improve understanding of Parkinson’s’ diseases and other neurodegenerative conditions in the African continent through clinical and genetic research".

PhD Student Laura Convertino's work has been driven by their belief on the importance of fair access to knowledge, to practice science and to benefit from its progress. As a member of the Wellcome Centre for Human Neuroimaging Equality, Diversity and Inclusion Committee, Laura has led on the development of the IoN Under-represented Student Mentorship Scheme:

"I was truly lucky to find committed and driven people with similar ideas, and we soon started discussing the possibility of a new mentorship scheme to support students coming from underrepresented groups to access a post-graduate research careers in neuroscience."

"The core idea of the scheme is to match mentors (in their PhDs or early postdoc positions) and mentees (students at the end of their masters) based on similar background and experiences, when possible, and to support the mentees throughout the process of selecting the best programme for their interests and skills, applying for PhD programmes and finding fundings opportunities."

The theme for 2022 International Women's Day is “Break the bias”. When asked what bias they would like to see challenged, some of our interviewees had very specific views.

Cassie Hugill, co-founder of the innovative social mobility programme In2research, said: "I would like to break the bias that researchers are a certain type of person. Research is diverse and the people in it need to be as well! The more we recognize this the better off we will be."

The work that Cassie is leading with in2reaseach focus exactly on expanding opportunities to students from underrepresented backgrounds to gain access to postgraduate study opportunities, thus increasing the plurality of voices of those who participate in research. STEM research builds on collaborative approaches and working groups that work together on the same problem. Diverse teams mean diverse points of view leading to research excellence.

Dr. Jo Barnes, Associate Professor, Dementia Research Centre, agrees with this view: " I would like to break the bias that rewards individuals rather than teams. It’s the team that makes science happen and that team can be more diverse and skilled than any one individual can ever be."

Professor Claudia Wheeler-Kingshott (Department of Neuroinflammation) would like to challenge how excellence is measured in today's Academia:

"I think there is a scientific bias that is still very much embedded in the way a scientist can move forward, which is that of publishing in high impact factor journals. Imaging, i.e. MRI, is a field that is crucial to society, having transformed medicine and is very much part of patients' management. But publishing in high impact factor journals is not that easy because our work is often incremental and involves large groups of authors (clinicians, physicists, computer scientists)."

"Yet, there are many scientists who are moving our knowledge forward and are "stuck" because they publish in good journals but are not "competitive" compared to colleagues in other science fields. This may become even more of an issue for females who may take time off for maternity and, like me, may return to a part time position while children are young, hence falling behind compared to male colleagues. There is recognition that each scientist should be compared to their own self and that possible biases need to be broken to ensure equal opportunities for all."

We also wanted to learn about the female role models who inspired our interviewees the most.

Dr. Caroline Selai (Senior Lecturer, Department of Clinical and Movement Neuroscience) said: "My Grand-mother Dorothy Rose was a role model to me. She was fiercely independent, broke all the rules and (important for the time), she did not worry what other people thought of her. She joined a men’s cycling club and wore trousers when cycling which caused such outrage that, when touring around the UK, she was banned from entering some villages!".

Argyro Alatza (Technician, Department of Neurodegenerative Disease) also mentioned a role model very close to her: "My mother. I learnt from her to be hardworking, fair, and kind to others." Laura Convertino mentioned their grandmother as someone who they admire:

"She was born in 1928 in a poor family of farmers in North Italy and completed only the third year of primary school, just before the war. However, she has always been a profoundly curious person, and managed to keep on learning and studying for her entire life, pushing her kids to attend university and to travel to learn more about the world. She even went to the US for the first time in her 70s. "

"We can have discussions on religion, gender identity, politics, as well as history and opera. No matter the topic, no matter how different our views can be, she is always open minded and willing to listen and to critically reconsider her views. I think this is the best teaching I could have had. If I will be able to keep on learning and allowing the world to prove me wrong in my 90s, I will know I did one thing right in life."

The dedication to supporting others was the most striking common feature amongst our interviewees, and undoubtably the reason why the IoN community recognises them as role models.

When asked about the work she is particularly proud of, Argyro Alatza mentioned "I am proud for teaching/supervising young scientists and see them developing into independent and strong scientists.". Dr. Caroline Selai responded to the same question "I am particularly proud of my work helping students with mental health difficulties to achieve their Masters degree."