Pioneering neurologist and UCL Professor commemorated with a blue plaque

James Samuel Risien Russell, one of Britain’s first black British consultants, a pioneering neurologist and Professor of Medicine at UCL, has been commemorated with an English Heritage London blue plaque. 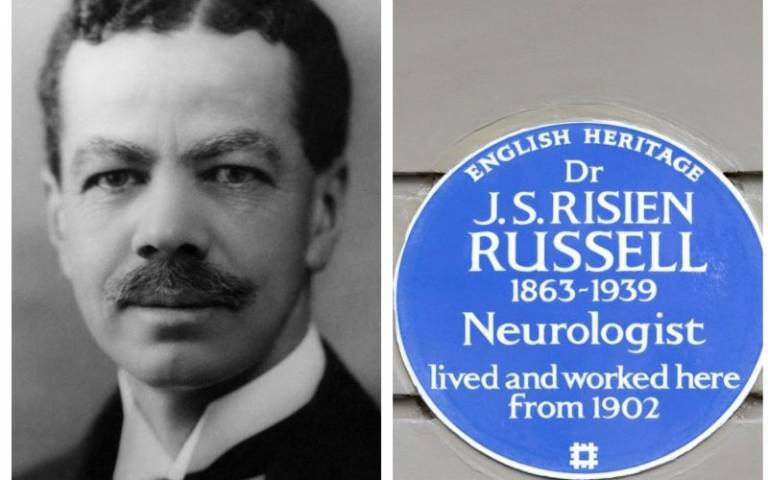 Born in British Guiana (now Guyana), Dr Risien Russell was one of the UK’s first black or mixed-race consultants and in the early 1900s was regarded as one of the country’s most important figures in the medical profession.

His plaque will be displayed at 44 Wimpole Street – the house which he both lived in and used as a private practice from 1902 until his death in March 1939.

Professor Michael Hanna, Consultant Neurologist and Director of the UCL Queen Square Institute of Neurology said “I am delighted to see that the life and work of one of Queen Square’s greatest neurologists is being commemorated in this way".

"It is without doubt that as one of the UKs first BAME consultant Neurologists he had to deal with many prejudices and biases which makes his achievements all the more impressive. He made many important observations and discoveries leading to improved understanding of neurological diseases such as subacute combined degeneration of the spinal cord due to vitamin B12 deficiency".

"His work on the interface between neurological diseases and mental health disorders was truly ahead of its time and some of his concepts and approaches are still highly relevant today. "He was truly a giant in world neurology and a role model for all BAME neurology colleagues that followed”

Professor Prof Helene Plun-Favreau, UCL Queen Square Institute of Neurology Deputy Director for Equality, Diversity and Inclusion :  “I am delighted to see that Dr Russell’s contribution to British Neurology is recognised with an English Heritage blue plaque. Not only he was a pioneer in Neurology, but he has been and still is a role model for all of us and I hope this commemoration will encourage more early career researchers from under-represented categories to pursue a career in Science.”

Born in 1863, Dr Risien Russell graduated from the University of Edinburgh as a Doctor of Medicine in 1883. And by 1903 he was appointed to the management board at the National Hospital, Queen Square, London, the world’s first neurological hospital.

Dr Risien Russell overcame the racial prejudices of the Victorian era to become a highly revered teacher, researcher and physician and played a key role in establishing the British school of neurology in the 1890s.

He also used his passion for scientific research to further our understanding of the anatomy of the brain and nervous system, and define specific conditions such as SACD (subacute combined degeneration of the spinal cord).

“We are delighted to recognise him with a blue plaque on the building where he lived and worked for nearly 40 years.”

While working at his practice on Wimpole Street, Dr Risien Russell specialised in mental disorders, treating famous clients such as the explorer Sir Henry Stanley and the novelist, Mrs Humphrey Ward.

And between 1908 and 1918 he served as a captain in the Royal Army Medical Corps, where he developed a special interest in shell shock.

Dr Risien Russell had strong opinions of treating people for mental illness outside the confines of institutions and chaired the National Society for Lunacy Law Reform in the 1920s. And in 1924, he caused controversy when he declared that nobody was “absolutely sane”.

Towards the end of his career Dr Risien Russell used his knowledge of mental health to act as an expert witness in the High Court upon psychiatric issues and was revered as a mental specialist, particularly for obscure or difficult cases.

Dr Risien Russell was dedicated to his work until the very end of his life, when he died suddenly in his consulting room, between appointments, at the age of 75.

Arthur Torrington, CBE, Director, Windrush Foundation, said: “The plaque is a direct result of a nomination by Dr John Hnderson, a Canadian physician, with supporting information from me".

The London-wide blue plaques scheme has been running for 150 years.