Novel insight into chromosome 21 and its effect on Down syndrome

A research team led by UCL Queen Square Institute of Neurology has, for the first time, identified specific regions of chromosome 21 which cause memory & decision-making problems in mice with Down syndrome, a finding that provides valuable new insight into the condition in humans 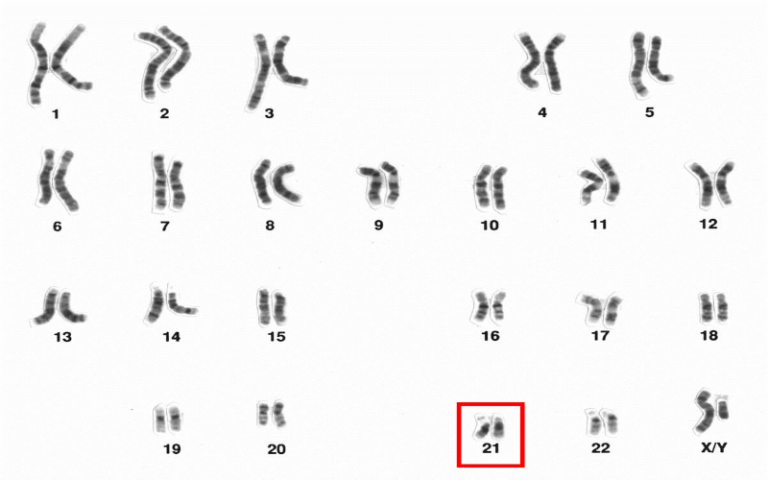 Most people have 46 chromosomes in each cell, divided into 23 pairs: people with Down syndrome (DS) have an extra copy of chromosome 21, which carries over 200 genes.

In this study, published in Cell Reports, researchers at UCL, supported by Cardiff University and the Francis Crick Institute, used mouse models to try and find out how having these extra genes causes learning disability.

Chromosome 21 and its genes are also found in mice, although the genes have dispersed onto three smaller regions on three different mouse chromosomes. These are mouse chromosomes 16, 10 and 17 containing 148 genes, 62 genes and 19 genes respectively.

During navigation tests, where mice needed to negotiate a simple ‘left-right’ T-maze, each group was measured for both memory and decision-making ability.

During these tests, the electrical activity of brain regions important for memory and decision-making was also monitored, using an electroencephalogram (EEG).

The researchers found that one of the mouse strains (‘Dp10Yey’ mice) had worse memory, and had irregular brain circuity (signals) in a part of the brain called hippocampus – which is known to be very important for memory.

They also found another strain (‘Dp1Tyb’ mice) had worse decision-making ability and had poor brain signalling between the hippocampus and the pre-frontal cortex – needed for planning and decision-making. And the third strain (‘Dp17Yey’ mice) had no unusual electrical activity in the brain.

Co-author, Professor Matthew Walker (UCL Queen Square Institute of Neurology), said: “These findings are a complete surprise – we did not expect the three different gene groups would act completely differently.  Scientists have traditionally worked on the hypothesis that a single gene, or single genes, was the likely cause of intellectual disabilities associated with Down syndrome.

“We have shown – for the first time – that different and multiple genes are contributing to the various cognitive problems associated with Down syndrome.”

Researchers will now look to discover specifically which gene or genes, within the smaller gene groups, are responsible for impaired memory and decision-making.

“This implies that therapies for people with Down syndrome should perhaps target multiple processes, and we have made the initial steps in identifying what some of these processes are.”

Researchers were supported by grant funding from Wellcome.

Study note: Mouse strains Dp1Tyb, Dp10Yey and Dp17Yey were genetically modified to carry an extra copy of one of the gene groups on mouse chromosomes 16, 10 and 17 respectively.