Professors Matthew Walker and Elizabeth Fisher (UCL Queen Square Institute of Neurology), write about their research, which has identified gene regions that cause memory and learning problems in mice with Down syndrome, and explain what insight this provides the human condition. 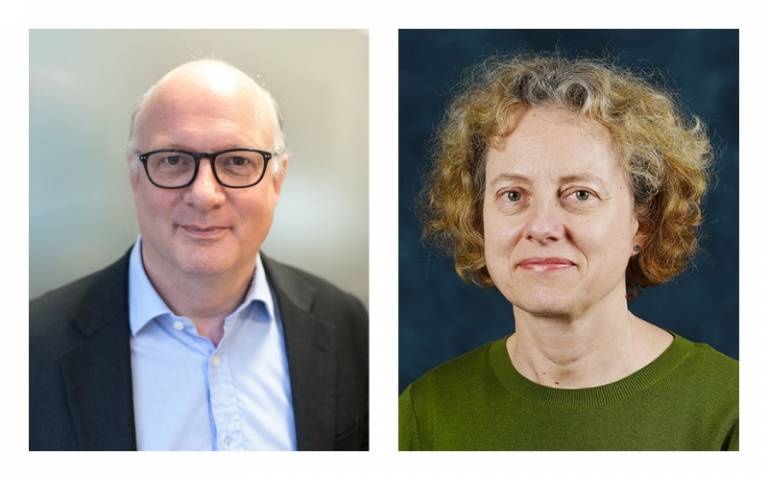 Down’s syndrome is a genetic disorder that occurs in about 1 in 800 births. It’s caused by having three copies of genes – rather than the usual two – on human chromosome 21. Down’s syndrome is associated with physical growth delays, and people with the condition might face problems in memory function, planning, and decision-making.

Although we know Down’s syndrome is caused by genes on human chromosome 21, we don’t know which genes cause learning disability when they are present in the three chromosomal copies – which is what our team of researchers wanted to find out. Our study found out that multiple different genes on chromosome 21 contribute to learning and memory problems in people with Down’s syndrome.

We used mouse models to conduct our study, as groups of genes found on three different chromosomes in mice are comparable to those on human chromosome 21. We worked with mice that had duplicated genes from mouse chromosomes 10, 16, and 17 to replicate features of Down’s syndrome in these mice. This allowed us to ask three key questions:

1.         Do all of these mice have intellectual disabilities (cognitive impairments)?

2.         Are the cognitive impairments that occur in each of these mice the same?

3.         What is the abnormality in brain function that results in this disability?

If we found any impairments, we would then need to find out which genes are present in the three individual chromosomes in the mice – and which genes caused the impairment.

Our study used a very simple task to determine cognitive impairments in the mice, called an alternating T maze. When at a T junction, mice will first explore one arm of the maze before the other. When the task is repeated, they naturally explore the other arm first. To successfully complete this task, the mouse has to remember which arm it had explored previously and – when it gets to the T junction – it has to decide to go the opposite way.

Tracking the number of times a mouse chooses the alternate arm gives us a measure of memory. The amount of time the mouse takes to make its choice at the T junction gives us a measure of decision-making. While the mice performed the task, we also recorded their brain activity using implanted electrodes and a wireless system. We simultaneously measured the activity in the hippocampus (an area of the brain critical for memory function) and the prefrontal cortex (an area of the brain critical for decision-making).

These findings show that cognitive impairments aren’t caused by more copies of single genes from chromosome 21. Rather, extra copies of some genes cause memory impairments, while extra copies of completely different genes lead to problems with decision-making. Moreover, this study showed that one of the main genes, called “Dyrk1A” – which was previously thought to cause intellectual disability in Down’s syndrome – was actually found not to cause any cognitive problems in our tests.

Measures of the electrical activity in the hippocampus and prefrontal cortex of these mice in the T maze also differed in each different mice strain. The chromosome 17 mice – which had not shown any learning and memory deficits – had normal electrical activity. The chromosome 10 mice, which had memory problems, were found to have distinct abnormalities in the brain’s hippocampus, which is critical for memory.

The chromosome 16 mice also had some abnormality in their hippocampus’s function. But most notably, they had abnormalities in the communication that takes place between the hippocampus and the prefrontal cortex – suggesting that the problem is not just to do with abnormal function in specific brain areas, but with the communication between those brain areas. As such, the different cognitive problems in Down’s syndrome are likely due to different brain and circuitry dysfunctions.

Because groups of genes on the mouse chromosomes, 16, 17, and 10 are the same as those on human chromosome 21, this now gives us a way of identifying which genes are important in learning and memory in people with Down’s syndrome, by looking at the same genes in mice. Our results suggest that specific learning and memory problems associated with Down’s syndrome are caused by different underlying genetic, brain region and brain connectivity abnormalities. Knowing this will help us further understand these cognitive deficits, and might help improve therapies. Further research will now need to focus on honing in on the particular sets of responsible genes.

This article was first published in The Conversation on 29 January 2020.