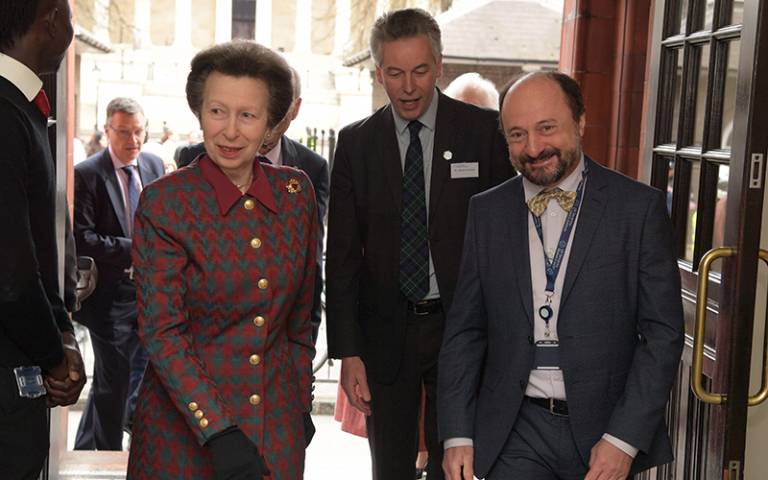 During the visit, The Princess met with senior academics to hear about their vision for the UK Dementia Research Institute (UK DRI), toured one of the new laboratories and learned about some of the cutting-edge research at the institute.

“We were delighted to welcome HRH Princess Royal to the UK DRI labs at UCL to present our vision of a world where research beats dementia,” said Dr Adrian Ivinson, Director of Operations, UK Dementia Research Institute.

“We showed the Princess Royal microscopes, cells and brains, our early career scientists described their research, and some of our recent recruits discussed the importance of a free flowing international community of researchers—all essential ingredients if we are to conquer dementia.”

The UK Dementia Research Institute, the UK’s biggest ever investment in dementia research, was launched in 2017 with core funding from three founding partners: the Medical Research Council, Alzheimer's Society and Alzheimer's Research UK.

With its hub at UCL, the UK DRI is made up of hundreds of world-leading academics, whose work is helping benefit the lives of millions of people living with dementia now and in the future.

The UK DRI was set up to find scientific solutions to one of society's biggest health challenges; over 1 million people are expected to have dementia in the UK by 2025.

The Princess Royal is Chancellor of the University of London, of which both UCL and King’s College London are constituent colleges.

Dr Ivinson and Professor Bart De Strooper, Director of the UK Dementia Research Institute, spoke initially about the progress the institute has made in drawing together over 300 established and early career researchers into a single national institute, and their ambitions for continued growth. Dr Ivinson also introduced the Princess to a dementia research participant and a former carer of a dementia patient, who have played key roles in establishing the institute including the recruitment of the Director.

The Princess visited new labs in UCL’s Cruciform building, where she met Dr Soyon Hong, who was recently recruited by the UK DRI at UCL from Harvard University, USA. Dr Hong explained her research into how the brain’s immune system, cells called microglia, may be at the heart of cognitive impairment in Alzheimer’s disease.

Professor Nick Fox, Associate Director of the UK Dementia Research Institute at UCL, then showed Her Royal Highness a sample of human brain tissue and explained how donated brain tissue is critical for research.

Postdoctoral research Dr Katie Wilson of the UK DRI at UCL demonstrated a new microscope, and discussed how she uses human stem cells from donated skin tissue to develop into brain cells, for research into causes of neuronal loss.

“Dementia poses one of the biggest public health challenges of our time, and understanding its causes and researching new treatments is a key priority for UCL, so we are proud to host the hub of the UK Dementia Research Institute,” said Professor Alan Thompson, Dean, UCL Brain Sciences.

“We are delighted that Her Royal Highness is seeing first-hand the progress that the UK DRI has made in establishing a world-leading centre at the forefront of dementia research.”

In 2024, the central hub of the UK DRI will be moving to a new building on Gray’s Inn Road, a £281 million programme of capital works, alongside the UCL Queen Square Institute of Neurology, with funding from UCL, government and philanthropic sources.