We are pleased to announce that Professor Martin Rossor, NIHR National Director for Dementia Research, Director of the Queen Square Dementia Biomedical Research Unit, Professor of Clinical Neurology at UCL Institute of Neurology and Consultant Neurologist at the National Hospital for Neurology and Neurosurgery, is the ABN Medallist 2017.

The ABN Medal is awarded annually to recognise outstanding contributions by British and Irish neurologists to the science or practice of neurology, or for contributions to the Association.

“I am delighted that Martin has received this major recognition by the ABN. Martin has made an enormous contribution to our present day understanding of dementia. His work is a fantastic example of bidirectional bench to bedside translational research that maximises the internationally unique partnership between the UCL Institute of Neurology and the National Hospital UCLH in Queen Square.” Professor Michael Hanna, Director of the UCL Institute of Neurology

Martin's long association with Queen Square began in the 1970s as an SHO. He returned as Registrar in Neurology in 1982, and continued to publish prodigiously, winning the 1986 Horton-Smith prize for the best MD from Cambridge in 1986.
In 1989, together with Bob Williamson and John Hardy, he published the landmark paper showing that a locus on chromosome 21 predisposed to Alzheimer’s disease.  In 1991,  Alison Goate, John Hardy and Martin identified the first mutation associated with familial Alzheimer’s disease – in the APP (Amyloid Precursor Protein) gene - that led to the amyloid cascade hypothesis and the first transgenic animal models. 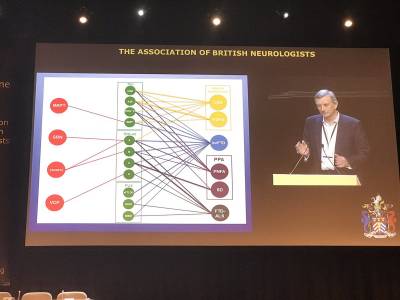 He was awarded a personal chair as Professor of Clinical Neurology at the Institute of Neurology in 1998 and established the Dementia Research Centre in 1999. He also edited the JNNP from 2004 to 2009.

Martin received a Lifetime Achievement Award by the Alzheimer’s Association in 2009.