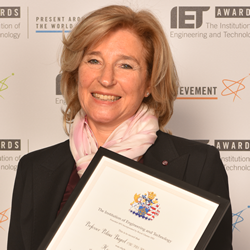 Professor Polina Bayvel is the Head of the Optical Networks Group (Department of Electronic & Electrical Engineering), UCL, a group she set up in 1994. Her research interests are in the area of optical communications and networks on different time- and length scales (from trans-oceanic distances to intra- and inter-data centre communications and routing.. This includes the analysis and implementation of wavelength-routed optical networks, high-speed optical transmission, and the study and mitigation of optical fibre nonlinearities. She was one of the first to show the feasibility of using the wavelength domain for routing in optical networks, and designed wavelength-selective devices needed for their characterisation and implementation. More recently she has focused on the study of capacity limits in ultrawideband nonlinear optical networks and nonlinearity-mitigation techniques. She has authored or co-authored more than 350 refereed journal and conference papers.

Polina Bayvel received her BSc (Eng) and PhD degrees in Electronic & Electrical Engineering from University of London, UK, in 1986 and 1990, respectively. In 1990, she was with the Fiber Optics Laboratory, General Physics Institute, Moscow (formerly USSR -now Russian - Academy of Sciences), under the Royal Society Postdoctoral Exchange Fellowship. She was a Principal Systems Engineer with STC Submarine Systems Ltd, London, UK, and Nortel Networks (Harlow, UK, and Ottawa, ON, Canada), where she was involved in the design and planning of optical fibre transmission networks. During 1994-2004, she held a Royal Society University Research Fellowship at University College London (UCL), and in 2002, she was appointed to a Chair in Optical Communications & Networks.

Professor Bayvel is a Fellow of the Royal Society, Royal Academy of Engineering (FREng), Optical Society of America (FOSA), Institute of Electronic & Electrical Engineers (FIEEE), the UK Institute of Physics (IoP), and the Institute of Engineering and Technology (IET). She was the recipient of the Royal Society Wolfson Research Merit Award (2007-2012), 2013 IEEE Photonics Society Engineering Achievement Award, 2014 Royal Society Clifford Paterson Prize Lecture and Medal and the 2015 Royal Academy of Engineering Colin Campbell Mitchell Award for 'pioneering contributions to optical communications technology' (shared with 5 members of her group). She has led the UK EPSRC Programme Grant UNLOC (2012-2018), focused on unlocking - and maximising - the capacity of optical communications. She is a vocal advocate for the importance and need for ubiquitous, secure, low-delay and high-capacity communications infrastructure to support the digital economy and new applications with the potential to transform people’s lives.

She was awarded CBE (Commander of the Order of the British Empire) in the 2017 New Year's Honours List for services to engineering: https://www.gov.uk/government/publications/new-years-honours-list-2017