A unique institute, built upon the wide knowledge base and expertise of its members and informed by a rich history while inspiring future generations. 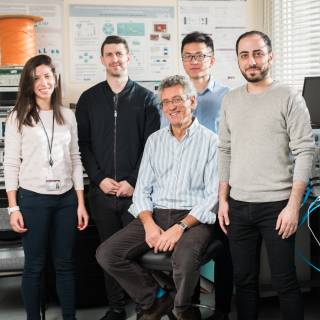 With over 100 researchers within the institute, we bring together some of the finest minds with knowledge from careers in both industry and academia. 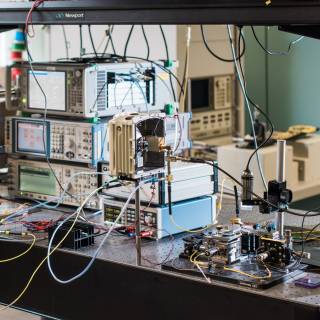 In answering some of the world's most pressing questions in the field of communications our approach is to view the entire communications and connected systems ecosystem.

Our research spans from the physics and engineering of wireless and optical physical layers up to software applications and data processing. 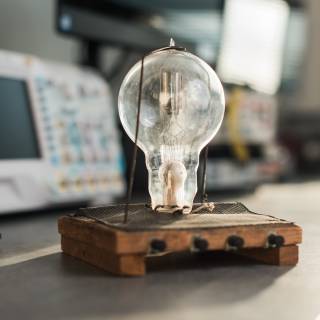 UCL has a long history in the area of communications research and, since the inception of the Department of Electrical Technology in 1885, has enhanced this work through industrial collaboration.

UCL’s mark on this field has spanned over 130 years beginning with the educating of Alexander Graham Bell and the pioneering collaboration between Professor Sir John Ambrose Fleming and Guglielmo Marconi. This seminal work resulted in the first transatlantic wireless transmission on December the 12th 1901 and the invention of the thermionic valve in 1904.

UCL continued at the forefront of communications technologies through the 1950's and 60's with Professor Harold Barlow’s world-leading work in microwave waveguides and his supervision of the doctoral student Charles Kao, inventor of the optical fibre for which he was awarded the 2009 Nobel Prize for Physics. Moving into the 1970’s Professor Peter Kirstein, often referred to as “the father of the European Internet”, with his research group was one of the first international nodes of the Internet (then ARPANET). With Vint Cerf, Professor Kirstein co-authored seminal work on inter-networking, playing a significant role in the very earliest experimental Internet work.

Into the 1990’s this world-leading research continued under the leadership of Professor John E. Midwinter who established UCL's optical Networks Group.  Before joining UCL Prof. Midwinter, while at BT, pioneered the introduction of single-mode optical fibre into the UK telecommunications networks. In 1997 Prof. Midwinter was succeeded by Professor Sir John O’Reilly who establishing UCL's Telecommunications Research Group, Prof. Sir O'Reily went on to become head of the EPSRC and later Director General of Knowledge and Innovation for the UK government.

A major expansion of communications activity at UCL occurred in 2000 with a £2.4M Joint Infrastructure Fund grant enabled major refurbishment of facilities within the Department including a state of the art ultra-high frequency research laboratory. This expansion of research facilities continued, with the establishment of one of the UK's most advanced optical networks experimental facilities in 2007, the UK's first connected systems laboratory that combines optical, mm-Wave and Internet data, opened in 2008, and a UK unique wireless communications experimental laboratory in 2012.  More recently cloud computing and software-defined network testbeds have been established, several of which run across multiple European Centres. In collaboration with the ARM, a British multinational semiconductor and software design company, we have a live Internet of Things testbed for the research and teaching of novel connected device applications.

As we move to the current day work in communications and connected systems at UCL continues to be at the forefront of the field. In the 2017 New Years Honour list Professor Polina Bayvel, head of the Optical Networks group in the Department of Electonic and Electrical Engineering and Co-director of ICCS at UCL, was awarded Commander of the Order of the British Empire for services to engineering. 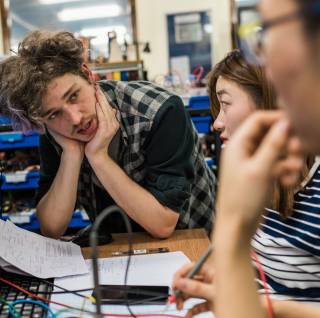 As part of UCL, ICCS is situated in one of the world's leading universities, our training and teaching are inspired by our pioneering research and delivered by world experts. ICCS offers a range of CPD opportunities from short bespoke courses to MSc modules tailed for industry.

Alongside this, we pride ourselves on training the next generation of communications technology researchers through our research degrees and offer several pioneering MSc courses in the area of communications engineering.