Monitor 81: Johnson falls; what’s next for the constitution?

The latest issue of the Constitution Unit’s newsletter on constitutional developments is out now and available for free download. 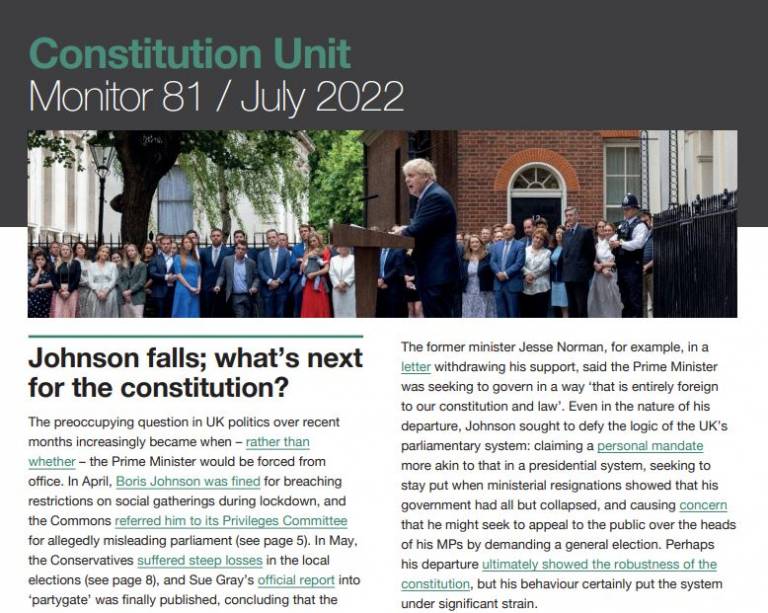 The new issue of the Constitution Unit’s Monitor is available now. Published three times a year, Monitor provides a unique round-up of constitutional developments in the UK over the preceding months.

This issue charts the months up to the fall of Boris Johnson, and the early stages of the Conservative leadership election. In common with other recent issues, it highlights growing concerns about democratic backsliding in the UK:

Other topics include proposed changes to parliamentary standards rules, multiple allegations of misconduct, disagreements over allowing babies in the Commons chamber, the annual round of May elections, the confirmation of terms of reference for the COVID-19 public inquiry, and the Queen’s platinum jubilee.

Beyond Westminster, the issue explores the Scottish First Minister’s decision to push forward with demands for a referendum on independence, the perilous state of Northern Ireland’s power-sharing institutions, an agreement on expanding the Welsh Senedd, and the implementation of reforms to intergovernmental relations.

In addition, the issue outlines three new reports from the Constitution Unit – on the findings of our Citizens’ Assembly on Democracy in the UK, the future of power-sharing in Northern Ireland, and the independence and accountability of parliamentary watchdogs. It provides links to video and podcast recordings of recent Unit events, including our conference in June on the state of the constitution. And it highlights the five key questions that we have set for the remaining contenders in the race to be Conservative leader and Prime Minister.

As with all issues of Monitor, this includes a handy list of key ‘people on the move’ in the constitutional field, and all Constitution Unit publications and media appearances.

This edition of Monitor, along with all previous editions, is available to download free from our publications page.