Vicki Baars, Office of the President and Provost. 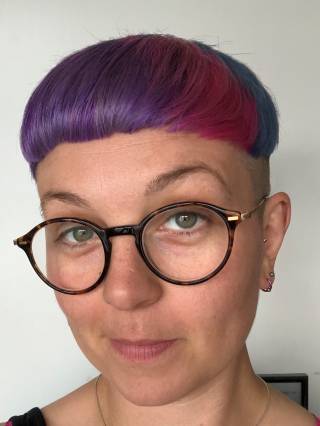 I am Vicki Baars. I work as an Equality, Diversity and Inclusion (EDI) Manager in the Office of the President and Provost. My main responsibility within the Equality, Diversity and Inclusion team is to support strategic EDI work across the School of Medical and Life Sciences. I am also the organisational lead for our Inclusive Advocacy programme, a sponsorship scheme for BME staff at grades 7 & 8.

When I applied for university I had ambitions of being a physiotherapist for professional dancers. I didn’t get the grades I needed to study physiotherapy so I opted to study biomedical sciences as there was an option to do postgraduate convertion to a physiotherapy qualification. While at university I got very involved in the student liberation campaigns around abortion rights, LGBTQ+ inclusion and anti-racism. This involvement in student activism changed my mind entirely on what I wanted to do. My activism led me to spending 5 years as a paid elected student officer in my local students’ union and then in the National Union of Students (NUS).

One of the key pieces of work that I undertook, which more specifically led me towards a career in Equality, Diversity and Inclusion, was writing an organisational strategy and work plan for the Equality Act (2010) coming into effect. During those 5 years as an elected officer I led campaign and change management projects, I was a trustee for a number of charities, I created and delivered a wide variety of training to name a few things. Working for NUS also allowed me to get to know a huge number of further and higher education institutions, so it’s no surprise that my career has consistently been in higher education.

I returned to UCL in September 2019 after a brief tour of 2 other universities in London. I briefly worked at Queen Mary where I worked in the Human Resources team as an EDI coordinator. I then spent 2.5 years at Goldsmiths as their Strategy & Review Manager – Sexual Harassment.

A lot of people think that EDI is a HR function and that you have to be a HR professional to move into such a role. My experience was that I was most able to influence change when I wasn’t based in HR.

If colleagues are thinking about getting involved in EDI I would advise them to follow their passions. Get involved in campaigns and influencing positive change. This builds up a bank of experience and is far more useful that a professional qualification.