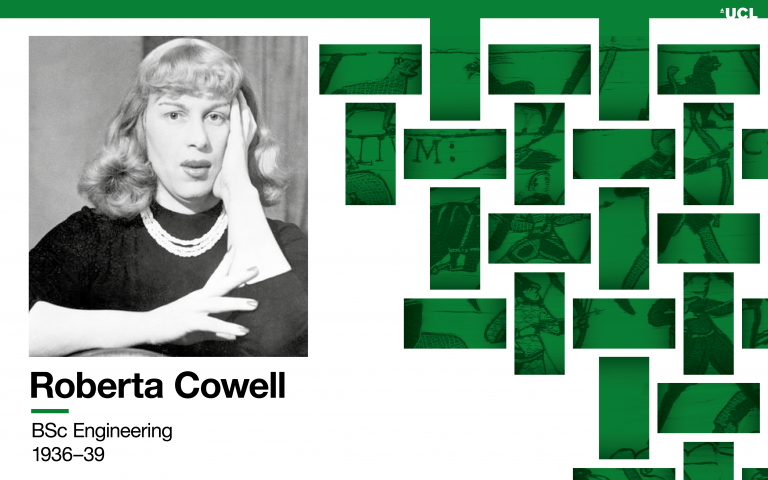 Roberta Elizabeth Marshall Cowell (1918–2011) was a racing driver and pilot, who was the first known British person to undergo male-to-female sex reassignment surgery.

Roberta was born ‘Robert’ in Croydon and attended the Whitgift School in South Croydon, an independent school for boys. From a young age, Cowell was enthusiastic about engineering, and started driving and working on racing cars soon after leaving school.

In 1936 Cowell started to study engineering at UCL, whilst pursuing her racing ambitions, going on to compete in the Antwerp Grand Prix in 1939. At UCL she met Diana Carpenter, a fellow engineering student who was also a racing fan. In 1941 the couple married, and had two children together.

Still living as Robert, Cowell became a spitfire pilot in the Royal Air Force in 1942. While flying over Germany, her plane crashed and she was captured by German troops. It was during Cowell’s five months of incarceration in the Stalag Luft I prisoner-of-war camp that some of her gender confusions came to the fore, when she passed up the opportunity to play a female role in one of the camp’s theatre productions for fear of being perceived as homosexual.

After the war Cowell started racing more competitively, but was increasingly consumed by depression linked to wartime trauma, and by a growing discomfort with her body. In 1948, Cowell left her family and sought help.

In 1950, whilst taking oestrogen but still living as a man, Cowell met Michael Dillon, a British physician and the first female-to-male transsexual to undergo phalloplasty surgery. Michael supported Cowell’s wish to change her gender and secretly performed a surgical removal of her testicles – an illegal procedure but one which enabled Cowell to state that she was intersex. This was a life-changing step for Cowell. By claiming intersex identity, she was able to alter the sex on her birth certificate to female.

In 1951 Cowell underwent vaginoplasty, a surgical procedure to construct a vagina out of penile tissue. The operation was carried out by Sir Harold Gillies, widely considered the father of plastic surgery. The procedure was the first of its kind in Britain.

Though she was pleased with the results of her transition, Cowell describes being regularly publicly shamed for not visibly conforming to a gender binary. She faced financial difficulties due to lack of work and was unable to continue racing due to the discrimination she faced.

Controversially, Cowell’s assertion that she was intersex was not simply an enabler to allow her to get the gender reassignment surgery and official recognition that she craved, but also a means to distance herself from other transgender people. In a brief final interview, in 1972, she explained that she had a rare chromosomal variation known as ‘XX male syndrome’, condemning those with XY chromosomes who underwent male-to-female sex reassignment surgery for turning themselves into ‘freaks’.

Cowell’s final years were spent in south west London in relative isolation and she died in 2011, in sheltered housing.