From Kerala to London: using UCL’s records to rediscover a father’s story

When Gopal Krishnan reached out to us to help retrace his father's path to UCL, we gave him the chance to see his father's old student records. Never could we imagine the impact this would have for Gopal and his family. Many look to their family history for insights into their own identity. Genealogy has become more accessible thanks to online databases and social media. But there’s no substitute for making a physical connection to your past. UCL was thrilled to help one man do just that during a visit to the UK from his home in India.

The journey starts at UCL

Gopal Krishnan is a mentor and advisor for Ayurveda Wellness Centres and Hospitals in Kerala. He recently came to the UK with his wife, Latika, to visit their daughter. While here, he wanted to find out more about his father, and role model, Krishnan Gopalan Unnithan (Bsc Chemistry, 1934).

Ahead of his visit, Gopal contacted the Alumni Relations team at UCL and asked if we could help him find out more about his father’s time at the university. We delved into our Special Collections and Student Records to dig out Krishnan’s personal files. And when Gopal arrived, we had lots to show him.

Born in 1910, Krishnan studied at UCL during the 1930s. Sadly, Krishnan passed away in 1991 but left a rich legacy for his son to discover. Gopal says: “I remember my father as a kind man, he would always treat people with respect. He was totally dedicated to his profession. He was a spirited man who would not just sit idle. It’s always been a mission in my life to see where he studied.”

UCL has a longstanding relationship with India, with notable alumni including the Bengali Nobel Laureate and musician Rabindranath Tagore. So our links with the subcontinent were well established by the time Krishnan arrived at UCL. 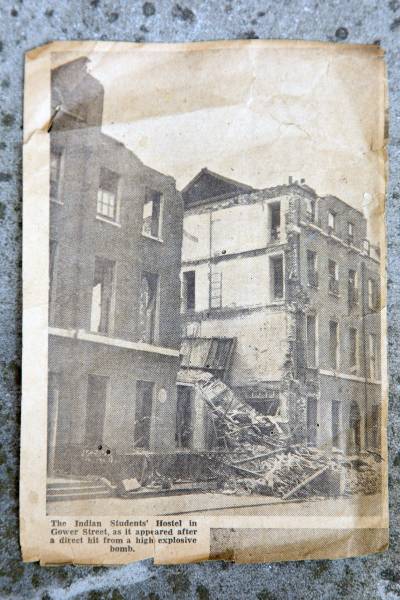 After completing a degree in India, Krishnan studied a Science BSc at UCL from 1931 to 1934 taking on subjects in chemistry and mathematics. Under the direction of His Highness the Maharajah of Travancore (now Kerala), he went on to specialise in rubber technology, becoming an Associate of Rubber Industry, London.

He returned to India and was appointed as Rubber Expert in the Travancore Government Rubber Factory, later becoming General Manager before retiring.

While at UCL, Krishnan initially stayed at the Indian Students Union on Gower Street, which was bombed during World War II. Gopal says: “My father kept the newspaper clipping of the bombing announcement in 1940. We visited the site where he would have lived, which is now unrecognisable.”

Gopal remembers his father as an avid photographer. He says: “I have many memories of my father teaching me how to take photographs – from capturing the light, to the composition of the photograph. We spent a lot of time together learning how to take the perfect photo.”

Gopal brought along an album of photos his father took while at UCL to show our Alumni Relations team. He says: “We have a bunch of pictures with his friends at university. There’s even one where they’re all sitting on the roof – you wouldn’t do that today!

“While he was studying here he got the nickname ‘flute Unnithan” because he used to play the flute at the union’s festival. Every time they would have a function, my father would get called up to play as part of the entertainment.”

While Gopal was visiting, our Special Collections team showed him Krishnan’s records, along with some other images and documents from the time he was studying, including the student magazine and photos of the campus. But there was one very special document, Krishnan’s student records containing his handwriting and signature. For Gopal, seeing his father’s signature after all this time was an incredibly moving moment – and later back in India, Gopal’s sisters shed a tear on seeing the photos of it that Gopal had taken.

To give Gopal more perspective on his father’s time at UCL, we also took him and Latika behind the scenes of our chemistry department, where he met with Professors Andrea Sella and Dewi Lewis. 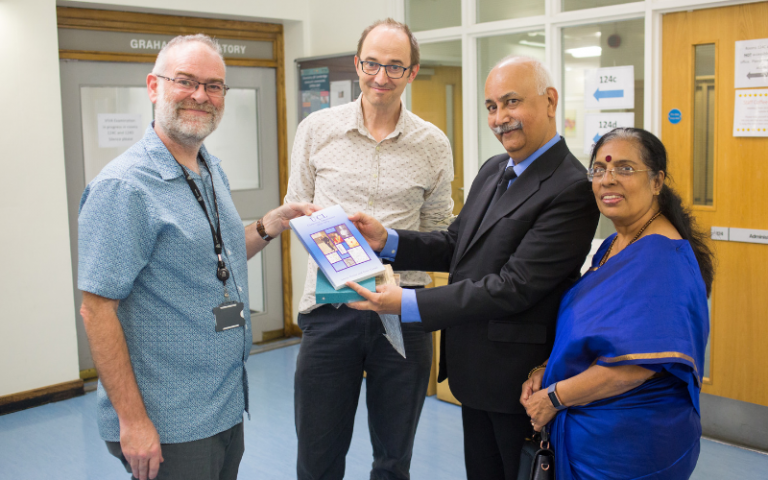 Memories to last a lifetime

For Gopal, the trip was invaluable. He says: “Those few hours were some of the most memorable moments of my life! I want to express my sincere thanks for all of the wonderful arrangements UCL made, for retaining those records and giving me a chance to see them.”

We were delighted to be able to fill in some of the blanks for Gopal – it’s one of the reasons we keep such extensive historic records. Our history is intertwined with that of our students and their families. If you’d like to see a family member's historic records, get in touch with the UCL Alumni Office to find out how.

Event photography with thanks from John Moloney Photography

Historic images with thanks from Gopal Krishnan.