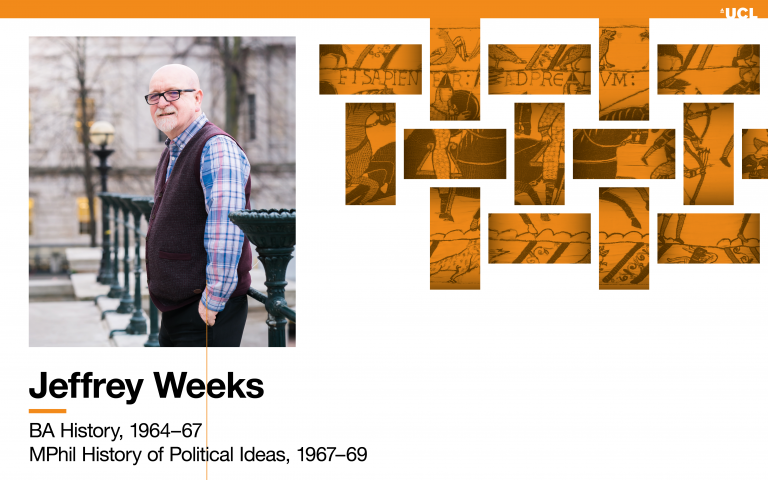 Jeffrey Weeks is Emeritus Professor of Sociology at London South Bank University and regarded as one of the leading British sociologists and historians within the field of sexuality. A committed activist for LGBT rights, Jeffrey is among the academics in the early period of gay men’s studies in Britain that emerged from the Gay Liberation Front, which he joined in 1970, and the Gay Left, of which he was a founding member.

Jeffrey is the author of numerous seminal books including Coming Out (1977), Sex, Politics and Society (1981) and Sexuality and Its Discontents (1985). In 2012, he was appointed Officer of the Order of the British Empire (OBE) for services to social science.

I came to London in 1964 from the South Wales valleys in order to become queer. My immediate milieu in College was sadly not particularly promising for a new sexual life. Although less stuffy and more classless than I had imagined – 1964 was the first year when it had deliberately attempted to broaden the student intake, with the majority from grammar schools, and half of our year were women – UCL’s broad liberalism went side by side with a lively heterosexuality that left me cold.

I secretly and passionately fell in love with a fellow (male) student in my first year – my unknowing, unacknowledged first love! – but he rapidly distanced himself when he began to suspect my attraction. In my secret anguish I buried myself further in work – and won the first year history prize.

I came out to another student friend who I suspected might be queer, on a walk through the sex sites of Soho, but he vehemently denied that he was. It took another ten years for him to come out as gay, and since then he has been a stalwart of local gay politics, and a life-long friend, but that didn’t help me at the time.

Some years later I discovered that our senior tutor had come out as gay in middle-age, and left his wife and children, but none of us had any suspicions at the time. His parties at his large comfortable home in North London were models, so I thought, of (heterosexual) and upper middle class domestic bliss, with deep settees and The Spectator casually resting on the coffee table.

By the time I had graduated I had ‘confessed’ my homosexuality to a small group of fellow students, including a woman with whom I had a brief and not particularly satisfying affair. But essentially my queer sexual life developed in a discrete and discreet world quite apart from student life.

From the start I had an urgent desire to find the queer world outside College life. What I lacked at first was a map. I was not helped by my ongoing shyness and uncertainty about my attractiveness and what I actually wanted to do sexually. But gradually, through casual encounters, I began to explore tentatively some of the more accessible pathways into what I found to be a baffling and sometimes intimidating world, but also a space for pleasure and disappointment, pain and delight, and of fundamental humanity. It turned out we were everywhere...

A message to the LGBT community

This exhibition will be on public display in the North Cloisters of UCL’s Wilkins Building throughout February 2019 to coincide with LGBT History Month.