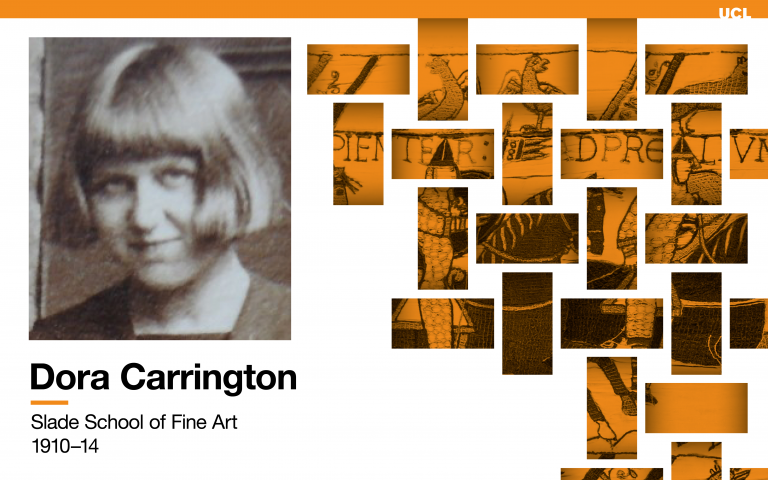 Dora de Houghton Carrington (1893–1932) was an English painter and decorative artist. Largely unknown before the 1970s, Carrington’s style was considered to be particularly progressive as it defied the artistic conventions of England at the time.

Born in Hereford, Carrington moved to Bedford as a child and was educated at Bedford High School where she showed great promise as an artist. In 1910, she won a scholarship to The Slade School of Fine Art at UCL and performed well, continuing to garner praise and awards for her work. Carrington was well liked by her peers and was considered a trendsetter, coming to be known as one of the ‘Slade Cropheads’ in 1911 when she cut her hair into a short bob.

A number of male students fell in love with Carrington during her time at The Slade. While she appreciated their attention and company, she struggled with physical intimacy due to her uneasiness with her own femininity and rejected many of their advances.

Graduating from The Slade in 1914, Carrington’s lack of confidence made her reluctant to exhibit or even sign her work. However, she soon became acquainted with members of the Bloomsbury Group, a circle of artists, writers and thinkers based in Bloomsbury during the early 1900s who were known for their liberal approach to life and sex.

In 1915, while staying with the pioneering writer and Bloomsbury Group stalwart Virginia Woolf, Carrington met Lytton Strachey for the first time. The pair quickly fell in love and in 1917 set up house together at Tidmarsh Mill in Berkshire, later moving to Ham Spray in Wiltshire in 1924. They remained together for the rest of their lives.

Though they never married and indulged in numerous affairs, Carrington and Strachey were inseparable. One of Carrington’s most significant affairs was with Ralph Partridge, another Bloomsbury Group member, who she met in 1918 and married in 1921. While Partridge fell in love with Carrington, Strachey fell in love with Partridge – and the three commenced an (often complex) ménage à trois at Ham Spray for a number of years.

Despite her numerous relationships with men, Carrington also had several relationships with women, including the American student Henrietta Bingham, with whom she had her most passionate affair. Carrington wrote to her friend and Strachey’s sister-in-law, Alix Strachey: ‘Really I confess Alix I am very much more taken with Henrietta than I have been with anyone for a long time. I feel now regrets at being such a blasted fool in the past, to stifle so many lusts I had in my youth, for various females. But perhaps one would have only have been embittered, or battered by blows on the head from enraged virgins’.

When Strachey died of cancer in January 1932, Carrington unsuccessfully attempted to commit suicide a month later by asphyxiation from a car exhaust. Partridge rescued her in time, however in March 1932 Carrington shot herself and died at the age of 38, seemingly unable to live a life without Strachey.