Find your path: discover how an alumni mentor can help you

A UCL alumni mentor can lessen the burden of the leap into the professional world, as Imogen Coupe discovered after reaching out to UCL alumnus Kirk Bennett. 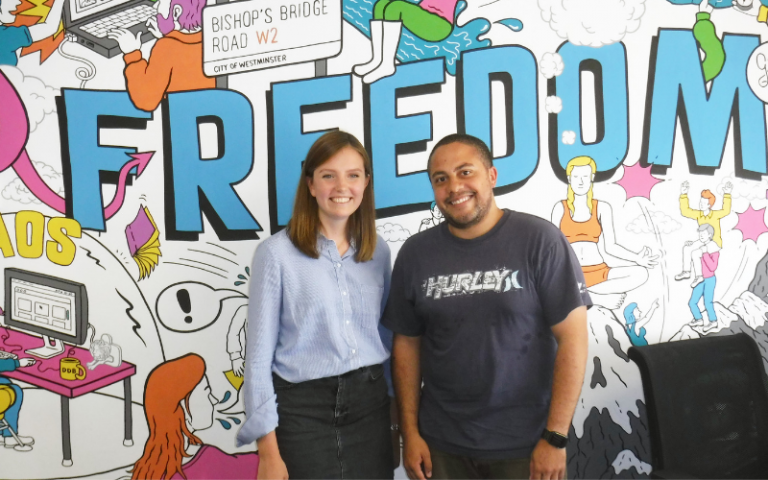 From scrolling through endless job listings to competing for sought after internships, the leap into the professional world can seem overwhelming for graduates. But instead of second guessing your options, why not speak to someone who’s been in exactly the same position and come out the other side?

An alumni mentor is an invaluable resource for real-life experience: something current student Imogen Coupe discovered when she connected with UCL alumnus Kirk Bennett.

Discovering a new side of your career

As is common with many graduates, he found himself questioning his next steps. Kirk says: “I decided towards the end of my degree that I didn’t really want to work in a lab. After working abroad for a while, I started looking for healthcare jobs, and I stumbled across healthcare market research.”

Kirk worked in market research for a year, before a recruiter suggested he try healthcare advertising.

““That opened up an industry that I’d never heard of. I did an internship at an agency for a couple of months – I got a job there and I’ve been in this industry ever since. I’m surrounded by people who have stumbled into the industry in a similar manner to myself, so the opportunity to tell more people about it is really beneficial.”

Kirk’s role as Account Director at DDB Remedy utilises the knowledge he acquired at UCL, but also opened up the opportunity to explore other skills. “I oversee all aspects of an ongoing project, from the first conversations with the client through to planning, doing the budget, working with creative teams, and delivering the final product.

“At the moment we’re mainly working in Europe but we handle global campaigns as well. Potentially, what we produce goes to every consultant that works in a particular field – for example, animations we create might be seen by tens of thousands of oncologists across Europe.”

Connections for the future

Finding herself in a similar position to Kirk in her final year of study, current Neurosciences student Imogen Coupe began searching for post-graduation options.

She says: “For a long time, I thought that I wanted to do research, which is the obvious route from my studies. I did a lab placement last summer and while I enjoyed it, I wasn’t fully convinced by the experience. I had a feeling that I should try something else.

“I was looking for an internship and trying big companies that had internship schemes. But then I stumbled across the alumni community, where I found Kirk. Initially we were messaging about what I could do to put me in a better position for when I graduated, but then Kirk said there might be a space at his company for an internship – which was unexpected!”

Imogen’s connection with Kirk opened up the opportunity for her to do a six-week internship working across different areas at DDB Remedy. By contacting an alumni mentor, Imogen had discovered potential career paths that would have otherwise remained untapped.

“She says: “I was with the account management team working with clients, shadowing, going to internal meetings, proofreading, and seeing the whole process from receiving a brief to delivering it to the client. I’m now in the copywriting team, which is a job that I’d never even considered so it’s amazing to be able to try it – I wouldn’t have been able to otherwise.”

Start your next adventure

The UCL Alumni Online Community has more than 12,000 users from hundreds of different professions. It gives students and graduates a space to voice their worries and find opportunities that are actually useful to their next steps.

“Imogen says: “The alumni network has a very different feel to a social media platform like Facebook. Everyone on the network is willing to talk, give advice and share potential opportunities so I would definitely recommend just giving it a try.”

And for UCL Alumni Online Community members, the network also helps to open doors to fresh talent. Kirk says: “There’s no way of knowing how much awareness brilliant graduates have about a particular industry.

“In healthcare, people generally think it’s just the pharmaceutical companies doing their own thing. But there are actually huge numbers of agencies and creative teams doing amazing work behind the scenes supporting the wider pharmaceutical industry.

“With our internships we try to show everyone the whole process. It’s great to be able to give an opportunity for people to experience that. Now, if Imogen gets a job in any agency, she’ll be able to slot into both the project management side or the writing side as she’s now had experience of both.”

Join the UCL Alumni Online Community now to find your own mentor or to volunteer to share your expertise with the next generation.