What is MOIN USA? 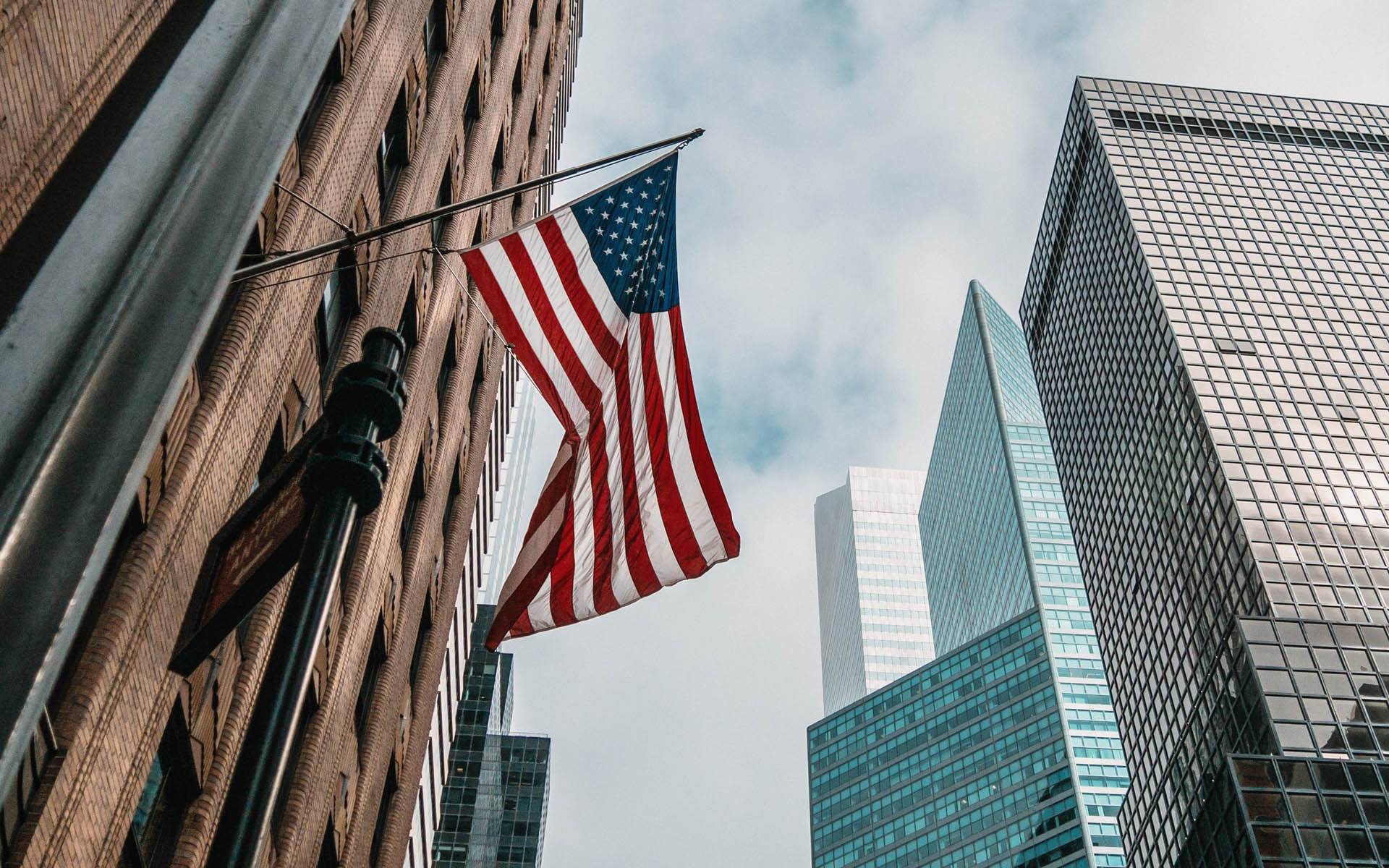 MOIN USA is a dedicated US chapter of the Mission-Oriented Innovation Network which works with US policy makers and academics to explore how mission-oriented and public value driven innovation can tackle grand challenges in the US context.

The MOIN USA Policy Note provides further details in regards to the approach of the network. 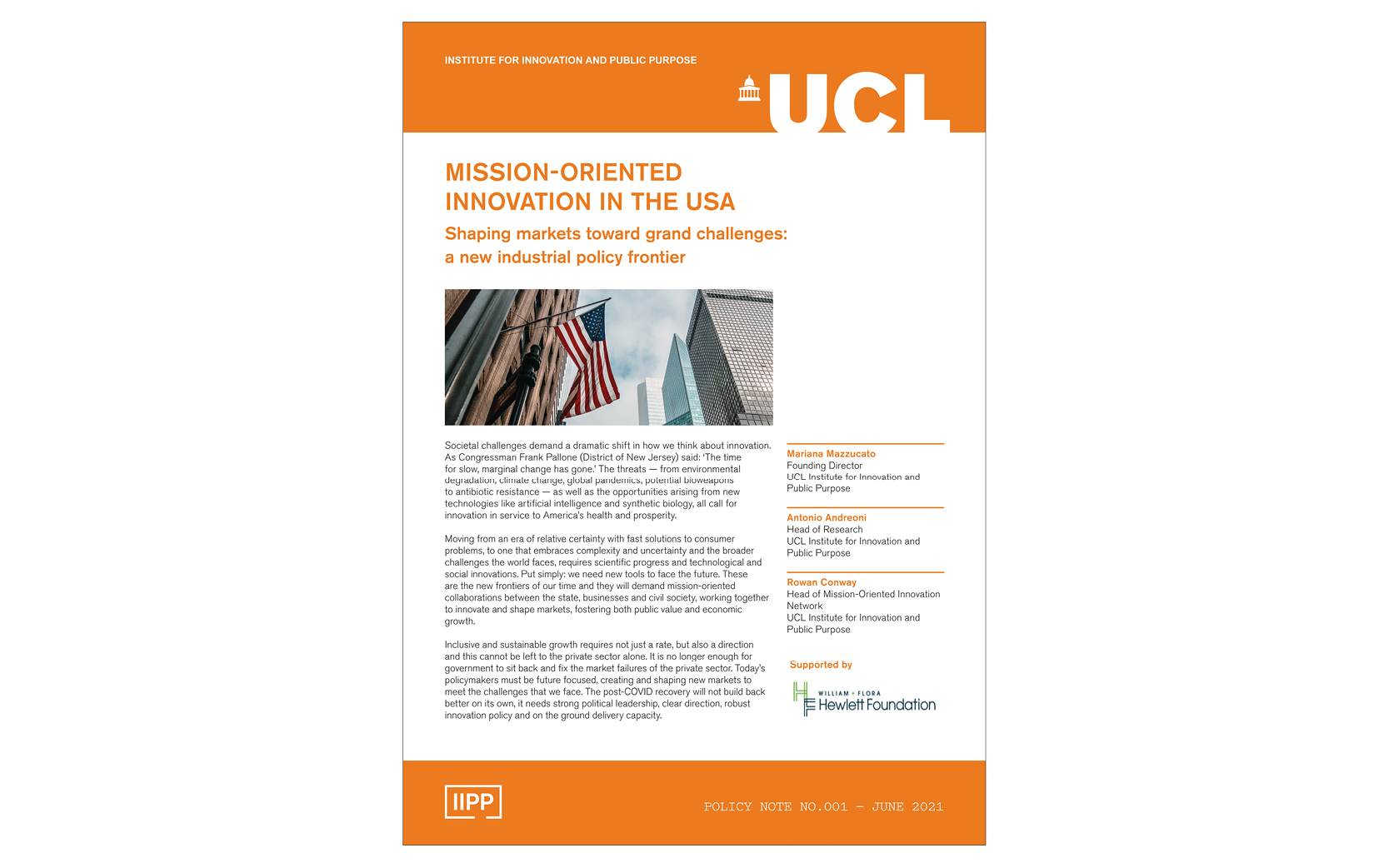 Mission-oriented innovation in the USA: Shaping markets toward grand challenges

Engagements with US Policymakers, stakeholders, media and academics.

Economic welfare vs. national security: Inclusive growth, the State, and the role of the private sector – hosted by the Atlantic Council (21 October 2020)

The National Institutes of Health (NIH) - the final lecture in last season’s Deputy Director for Management Seminar Series—challenged the audience to widen its vocabulary and tell more complete stories about who leads innovation.

Investments in Science and Innovation (27 July 2015)

Market fundamentalism has failed to improve economic and social conditions.

Now, we need a mission-oriented approach to the economy that embraces an active role for government in spurring growth and innovation.]The United States is not alone. Countries throughout Europe and elsewhere are increasingly turning to the view that governments should use industrial policy to tackle grand challenges. Recognizing this trend, the International Monetary Fund issued a report in 2019 called “The Return of the Policy That Shall Not Be Named: Principles of Industrial Policy.” Why could this policy “not be named”? The short answer is that industrial policy was one of the many casualties of an international shift in economic policy that began in the 1980s and flourished under the administrations of Ronald Reagan in the United States and Margaret Thatcher in the United Kingdom. The emergent sensibility—what we now call neoliberalism—was codified in 1989 in the Washington Consensus, which championed privatization, deregulation, and free trade. Along with these central pillars came an emphasis on low budget deficits, independent central banks focused on low inflation, and the liberalization of trade and foreign direct investment. This outlook was deeply confident in markets and deeply skeptical of government action, beyond the state’s limited role in enforcing property rules and investing in education and defense. “On the basis of an exhaustive review of the experience of developing economies during the last thirty years,” the World Bank summed up in the early 1990s, “attempts to guide resource allocation with nonmarket mechanisms have generally failed to improve economic performance.”

Business is talking about stakeholder capitalism. Governments are talking about the need to confront challenges such as climate change. The new era requires walking the talk—and putting common purpose at the center of how the public and private sectors interact. For too long, the relationship between government and corporations has been parasitic, not symbiotic. In areas like health, we have governments putting billions of dollars into drug innovation, yet taxpayers often cannot afford them. Government invented the internet but didn’t bother making sure that technology corporations wouldn’t abuse our privacy. A new social contract is required to make sure that stakeholder value and policies defined by the challenges they must solve go to the center of how business and the state interact—that is, in how they co-create value.

In promising to "build back better" from the pandemic, US President Joe Biden has certainly struck the right note. But to succeed, he will need to draw on the lessons of a previous era, says Professor Mariana Mazzucato (UCL Institute for Innovation & Public Purpose).

A moon shot model for the transformation of capitalism

Capitalism is facing three major crises. A pandemic-induced health crisis has rapidly ignited an economic crisis with yet unknown consequences for financial stability, and all of this is playing out against the backdrop of a climate crisis that cannot be addressed under the rubric of business as usual. It may be hard to cast your mind back, but in January 2020, the news media were full of frightening images of overwhelmed firefighters in Australia, and flood workers in Venice—not overwhelmed health care providers all over the world. Indeed, a 2020 outlook published in The Economist had not one word on Covid-19.

Today's digital economy has grown up around a business model of data and wealth extraction, confounding traditional antitrust paradigms and undermining the public and social value that otherwise could be derived from technological innovation. The state can redress these problems, but only if it reclaims its proper role.

Covid-19 has exposed the myriad weaknesses of modern capitalism. And in many countries past cuts to social services and public health have amplified the damage wrought by the pandemic, while other self-inflicted wounds to the state have led to inadequate policy co-ordination and implementation. Mass testing and tracking, production of medical equipment and education during lockdowns have all suffered as a result. We should not be afraid of a post-pandemic world that will not be the same as the status quo ante. We should embrace it and use all appropriate fora and available opportunities to make it a better world by advancing the cause of international cooperation.

Capitalism After the Pandemic: Getting the Recovery Right  - by Professor Mariana Mazzucato for Foreign Affairs (December 2020)

After the 2008 financial crisis, governments across the world injected over $3 trillion into the financial system. The goal was to unfreeze credit markets and get the global economy working again. But instead of supporting the real economy—the part that involves the production of actual goods and services—the bulk of the aid ended up in the financial sector. Governments bailed out the big investment banks that had directly contributed to the crisis, and when the economy got going again, it was those companies that reaped the rewards of the recovery.

President Joe Biden has made good on his pledge of re-joining the World Health Organization and committing to multilateralism in the U.S. COVID response by joining the international purchase and distribution platform COVAX. But he can do much more to ensure everyone, everywhere gets the COVID vaccine quickly. The world is watching as the three promising vaccines from Pfizer/BioNTech, Moderna/U.S. National Institute of Health and AstraZeneca/Oxford University are rolled-out in rich countries. Yet we're bracing ourselves for yet another major failure in the global COVID response: U.S. vaccine stocks are already running dry and AstraZeneca has failed to make good on its contracts to supply the European Union. New variants of the virus, which are more contagious and possibly more deadly, have been found in the U.K., South Africa and Brazil. If we don't move quickly, current vaccines may no longer be a match for new mutations.

The year is 2023. The COVID-19 pandemic has come to an end, and the global economy is on the path to recovery. How did we get here? How did our economy and society evolve to overcome the greatest crisis of our age? Let’s begin in the summer of 2020, when the unabated spread of disease was heralding an increasingly dire outlook for economies and societies. The pandemic had exposed critical vulnerabilities around the world—underpaid essential workers, an unregulated financial sector and major corporations neglecting investment in favor of higher stock prices. With economies shrinking, governments recognized that both households and businesses needed help—and fast. But with memories of the 2008 financial crisis still fresh, the question was how governments could structure bailouts so they would benefit society, rather than prop up corporate profits and a failing system.

Capitalism Is Broken. The Fix Begins With a Free Covid-19 Vaccine – by Professor Mariana Mazzucato for The New York Times (28 October 020)

Skewed public-private relationships, like pharmaceutical companies getting millions from taxpayers then overcharging for drugs, are just one part of the problem.

This is an article from World Review: The State of Democracy, a special section that examines global policy and affairs through the perspectives of thought leaders and commentators, and is published in conjunction with the annual Athens Democracy Forum.

We Socialize Bailouts. We Should Socialize Successes, Too. - by Professor Mariana Mazzucato for The New York Times (1 July 2020)

Governments have spent trillions in tough times without creating structures that turn short-term fixes into a more inclusive economy.

When the economy is in crisis, who do we turn to for help? Not corporations — it’s governments. But when the economy is flourishing, we ignore governments and let corporations soak up the rewards. This was the story of the 2008 financial crisis. A similar story is unfolding today. Governments have spent trillions on stimulus packages without creating structures — like a citizens’ dividend, which would reward public investment — that turn short-term remedies into the means for an inclusive, sustainable economy. This gets to the heart of what fuels inequality: We socialize risks but privatize rewards. In this view, only businesses create value; governments merely facilitate the process and fix “market failures.”

Unless we fix the system, American taxpayers will get gouged on a vaccine they paid to produce.

The search for treatments and vaccines to curb transmission of the new coronavirus is in overdrive. Fortunately, there are a number of promising candidates thanks to the U.S. government’s investment in biomedical research and development. Since the 2003 SARS outbreak, the United States has spent nearly $700 million of taxpayer money on coronavirus research — more than any other country — through the National Institutes of Health. Yet the question right now for Americans — thousands of whom are forced to ration their insulin and face astronomical bills for live-saving drugs — is not only when these treatments and vaccines will become available, but at what price.

Industrial strategy is back. Let’s use it to tackle the greatest challenge of our time.

The 21st century is increasingly being defined by the need to respond to major social, environmental, and economic challenges. These “grand challenges” include climate change, demographic challenges, and promotion of health and well-being. The challenge of generating sustainable and inclusive growth, like other major policy challenges, is complex, systemic, interconnected, and urgent, requiring insights from many perspectives. For example, poverty cannot be tackled without attention to the interconnections between nutrition, health, infrastructure, and education—as well as more traditional approaches such as redistributive tax and transfer policy. “Grand challenge” thinking is being applied across the world, with some of the most interesting experiments around sustainability being driven by the needs of emerging economies.

Moving from an era of relative certainty with fast solutions to consumer problems, to one that embraces complexity and uncertainty and the broader challenges the world faces, requires scientific progress and technological and social innovations. Put simply: we need new tools to face the future. These are the new frontiers of our time and they will demand mission-oriented collaborations between the state, businesses and civil society, working together to innovate and shape markets, fostering both public value and economic growth.

The concept of a public option – a good or service that is government-provided, quality-assured and universally available at a reasonable and fixed price, which coexists with products from the private sector – is receiving increasing interest as a public policy tool (Sitaraman and Alstott 2019). The idea can be applied to a range of social and public services, such as health care, retirement, higher education, banking, and childcare. It can also be applied to innovation and manufacturing, especially in the pharmaceutical industry and with regard to issues that matter to citizens (access to health, clean energy, and the benefits of big data and AI). Indeed, the use of public options for sectors driven by fast innovation is developing into an exciting new area of policy.

Enhancing research and development and ensuring equitable pricing and access to cutting-edge treatments are both vital to a biopharmaceutical innovation system that works in the public interest. However, despite delivering numerous therapeutic advances, the existing system suffers from major problems: a lack of directionality to meet key needs, inefficient collaboration, high prices that fail to reflect the public contribution, and an overly-financialized business model.

MOIN USA is supported by the William and Flora Hewlett Foundation.