Joined by the mayors of Barcelona, Bogota and Freetown, UCL IIPP collaborates with UN Habitat and LSE to launch the Council on Urban Initiatives to help reimagine how cities will reach ambitious social goals. 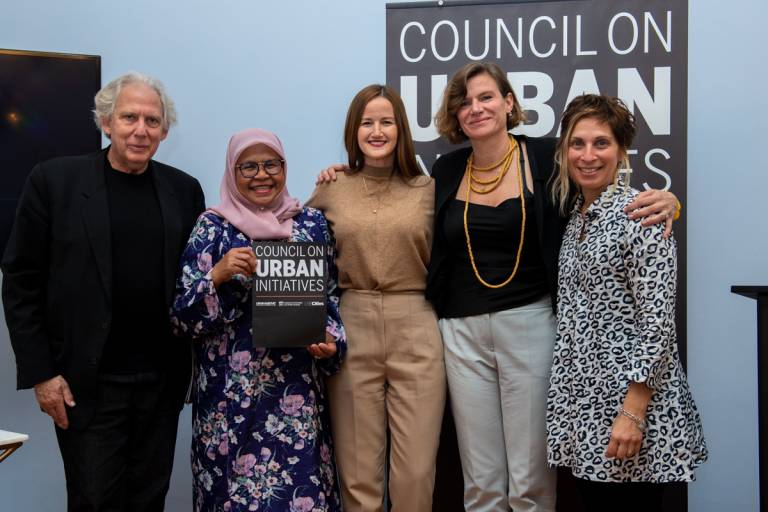 As international climate negotiators entered their third day of deliberations at COP26 in Glasgow, the newly established Council on Urban Initiatives, co-chaired by IIPP’s Founding Director, Professor Mariana Mazzucato, squarely placed cities at the crossroads for delivering transformative climate action and being the leading force for other ambitious societal objectives. High profile UN officials including Secretary General Antonio Guterres and UN-Habitat Executive Director Maimunah Mohd Sharif both expressed their commitment to the Council on Urban Initiatives and its important role for helping to shape the international agenda and reframe how we govern, plan and design cities.

Members of the Council on Urban Initiatives investigated the barriers and challenges they have faced when advancing urban health, justice and sustainability agendas during the launch event on 3 November. These discussions explored the complexity of governance, policy and design at the city level and set a foundation for the Council’s role and capabilities for generating ideas of tools and frameworks that could be developed to overcome barriers to innovation and progressive policymaking.

The Council’s launch event which was attended by a small invited in-person audience and  a large virtual audience featured a keynote address from the UN Secretary General António Guterres in which he stated:

““The Council on Urban Initiatives has an important role in reframing how we think about cities and urban governance, shape the international agenda, share best practices and fast-track innovation…The United Nations is fully committed to working with you to connect the local with the global and together achieve green, just and healthy cities that help us to deliver on our global commitments.”

“"Over the past year and a half, city governments have demonstrated that they are uniquely placed to engage citizens in designing creative solutions to massive challenges. They must be empowered with the ability to transform budgets and tools to be outcomes-based, and to develop new forms of collaboration and partnership with a clear sense of public purpose, aligned with the ambitious goal of building cities that are green, healthy and just."

A highlight of the event was the Mayors’ Roundtable discussion between Council members Mayor Yvonne Aki-Sawyerr of Freetown, Mayor Ada Colau of Barcelona and Mayor Claudia López of Bogota, moderated by Leilani Farha of The Shift, which focused on 'delivering just, healthy and green cities.'

““Our mission (in Barcelona) is to build a city that defends life and prioritises safety and healthy living for all...we’ve learnt that our urban transformation needs to prioritise the most vulnerable people and ensure they are looked after.”

Watch the full speech by Director General of WHO, Dr Tedros Adhanom:
The Council on Urban Initiatives is a new collaboration between UCL’s Institute for Innovation and Public Purpose, UN-Habitat and LSE Cities at the London School of Economics.

If you would like to learn more about the Council or our work with cities, please contact Ryan Bellinson.