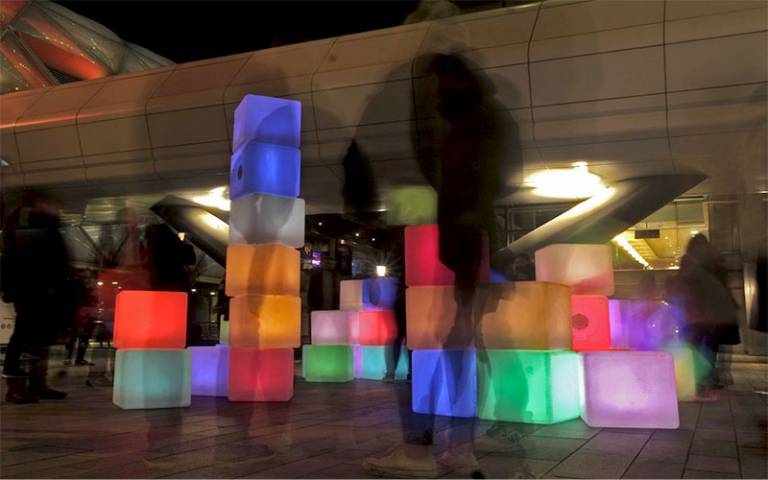 A multiscale approach to bodily interactions with urban art and media installations.

The migration of digital interactive technologies to urban settings blurs the boundaries between architecture and human-computer interaction (HCI). A growing number of interactive media have been deployed in outdoor urban spaces, affecting both the social and the spatial qualities of the urban environment.

At the same time, the theme of embodied interaction has gained traction in recent years (Marshall and Hornecker 2013), and one of the emerging interaction styles to appear in this context is whole-body interactions.

Urban art and media installations is an interface typology that encapsulates the trends outlined above. On the one hand, since these installations are usually located in open, public settings, they have a markedly urban and social character; on the other hand, urban installations have increasingly embraced whole-body interaction, encouraging people to interact by performing actions like running, jumping or swinging their bodies in playful and/or unexpected ways.

As such, the enquiry is anchored to three notions and their corresponding analytical scales: the notion of “urban spatial layout” at the macro level of the urban environment; the concept of “shared encounters” at the intermediate societal level; and, at the micro level of individual bodily engagements, the research focuses on whole-body interactions.

The research adopts an in-the-wild approach of five interactive urban installations situated in the UK and conceived by different artists and designers. Besides architecture and HCI, the investigation spans emergent domains such as media architecture (Vande Moere and Wouters 2012), human-building interaction (Alavi et al. 2016), Urban HCI (Fischer and Hornecker 2012) and tangible and embodied interactions (Hornecker 2011). The main expected contribution of the thesis is to deliver a consistent theoretical framework as well as methodological insights to support the design and analysis of urban media installations.

He has a MSc degree in architecture and urbanism at Federal University of Minas Gerais (UFMG, 2013).

He is now enrolled at The Bartlett in the Architectural Space & Computation MPhil/PhD programme.