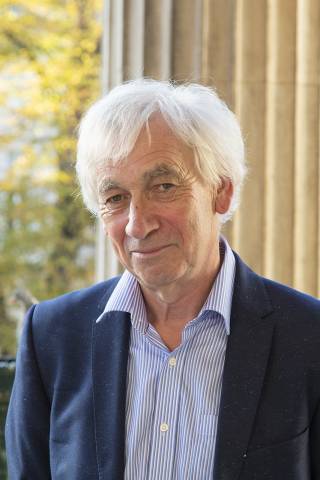 I am working primarily in observational cosmology addressing issues related to the nature of the world model, the origin and evolution of galaxies, the growth of large scale structure and the nature and distribution of dark matter. My recent focus is on addressing the origin of the earliest galaxies and understanding their role in cosmic reionisation. I am enthusiastic about the use of new instruments and observational opportunities when they further the progress that can be made in these areas.

Past and Present Students

I have been interested in the role that gravitational lensing can play in cosmology and galaxy formation studies since the late 1980's. I remain hopeful that during my scientific career we can launch an imaging satellite (such as Euclid) capable of tracing the growth of structure from the time-dependent clustering of dark matter seen from weak lensing signals. On small scales I have used strong lensing to separate dark and baryonic matter distributions in clusters to understand how baryons influence the dark matter profile. Strong lensing also enlarges the apparent sizes of background galaxies and I have used this phenomenon to locate distant galaxies and study their internal properties such as their abundance gradients and velocity fields.

I took part in one of the earliest successful studies to locate and characterize cosmologically-distant Type Ia supernovae and later joined the Supernova Cosmology Project. The resulting "accelerating Universe", recently awarded the 2011 Nobel Prize in Physics, is a bewildering result which has motivated a number of more ambitious ongoing and future supernovae surveys. I am putting most of my effort into examining the validity of using Type Ia SNe for future studies. My research includes examining the environmental dependence of supernova properties as well as the question of possible spectral evolution such as might arise from changes in the progenitor composition. This work is of a long term nature and is being undertaken with spectrographs on Keck and HST.

I have been an enthusiastic promoter of multi-object spectroscopy since the 1980's, working with colleagues to develop early robotic positioners for the former Anglo-Australian Telescope and several multi-slit spectrographs. This work culminated in the 2 degree Field Galaxy Redshift Survey which demonstrated the presence of a baryonic acoustic peak in the large scale distribution of nearby galaxies whose precise measurement at various epochs is a very powerful cosmological probe. I am working with an international team to build the Prime Focus Spectrograph for the Subaru 8m Telescope. When constructed this instrument will undertake a survey of millions of faint galaxies to directly map the cosmic expansion history since a redshift 2 as well as probe the stellar halo of our Galaxy and M31. Read the detailed science case for this remarkable instrument. I also recently led a ESO Working Group that would take the next logical step towards a 10-12 meter class telescope with a 5 square degree field. Read the Working Group Report that describes the remarkable science potential of such an instrument as well as the White Paper submitted to Astro2020.

I have been interested in studying the properties of distant galaxies since I was a postdoc in the late 1970's. I use the combination of HST images, Spitzer photometry, ground-based K-band imaging and, most of all, Keck and VLT spectroscopy to better understand the origin of the wide diversity of galaxy morphologies. Key questions I am working on include the mass-dependent assembly of galaxies over the redshift range 0 to 7, tracing cosmic reionization through deep Hubble imaging and statistical measures of Lyman alpha emission in distant galaxies. Read about the Hubble Ultra Deep Field 2012 program to study galaxies deep in the reionization epoch. Closer to home I also study the onset of ordered rotation and surprisingly compact nature in distant spiral and elliptical galaxies respectively. I am a recent convert to the phenomenal advances being made in these areas through the use of adaptive optics.