The Dark Energy Survey (DES) is a 5 year photometric survey of the Southern sky that aims to answer key questions about the nature of dark energy and the structure of the universe. To conduct this survey, the Dark Energy Camera (DECam), a 570-megapixel wide field digital camera, has been constructed and mounted on the 4-m Blanco telescope at the Cerro Tololo Inter-American observatory, high in the Chilean Andes. 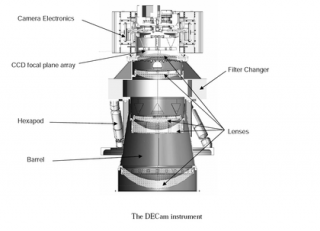 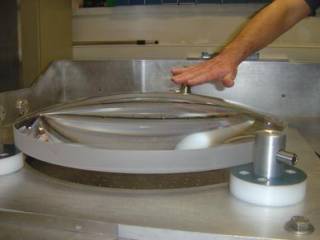 The UCL Astronomical Instrumentation group was involved in the construction of DECam, in particular in the design and construction of the optical corrector, a major component of the camera which took several years to complete.  The corrector consists of an array of five large lenses which sit at the primary focus of the camera, with the principle lens measuring almost one metre across.  To ensure a high degree of accuracy, the lenses are aligned to within 50 microns - this is equivalent to half the thickness of a sheet of paper and enables the camera to produce high resolution images over an extremely wide field. UCL has been involved in the optical design and was responsible for the procurement and management of the optical fabrication. UCL also integrated and aligned the optics into the camera barrel.

The assembly of the five lenses for DECam and its installation on the telescope was a major technological achievement, producing one of the largest cameras on the globe. DECam is roughly the size of a phone booth and is the most powerful survey instrument of its kind, able to see light from over 100,000 galaxies up to 8 billion light years away in each snapshot. It was shipped from London to Chile in December 2011 and installation on the telescope was completed in August 2012.

'First-light' for the instrument was in September 2012 and the Dark Energy Survey started in August 2013. In February 2015, the second year of DES observations were successfully completed.

The Dark Energy Spectroscopic Instrument (DESI) is a massively multiplexed fibre-fed spectrograph that will make the next major advance in Fundamental Cosmology research in the timeframe 2019–2023. On the Mayall telescope, DESI will obtain spectra and redshifts for at least 18 million emission-line galaxies, 4 million luminous red galaxies and 3 million quasi-stellar objects. DESI will: (i) probe the effects of Dark Energy on the expansion history using baryon acoustic oscillations, (ii) measure the gravitational growth history through redshift-space distortions, (iii) measure the sum of neutrino masses, and (iv) investigate the signatures of cosmological inflation via primordial non-Gaussianity. The resulting 3-D galaxy maps at z < 2 and Lyman-alpha forest at z > 2 will make 1%-level measurements of the distance scale in 35 redshift bins; this will improve the precision of cosmological constraints by almost an order of magnitude compared to existing data, and be at least three times better than any result from currently planned competitor experiments.

DESI is being built by an international consortium led by the Lawrence Berkeley Laboratory. The UK is a major partner in the project funded through the Science and Technology Facilities Council.

UCL has responsibility for aspects of the optical corrector design, procurement and assembly. The corrector consists of six approximately 1m lenses that will be mounted and aligned at UCL before being shipped to the telescope in 2017/2018.