Much of our research in modelling and characterising optical elements find their  applications in the design of instruments such as spectrometers or polarimeters which maximize the optical efficiency and information content of the radiation to be detected. 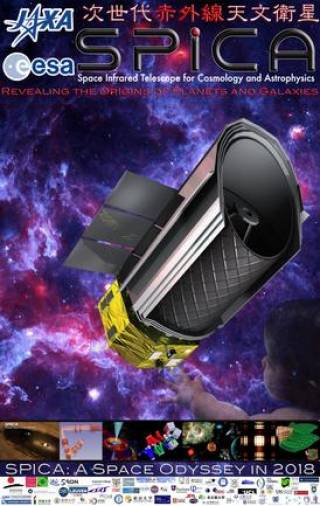 An example of the programmes we are involved in is the scientific definition design of the SPICA Far Infrared Instrument (SAFARI).  SPICA is a Japanese led mission scheduled for launch in ~2018 that will have a telescope of similar diameter to the ESA Herschel Mission but cooled to <6-K.  This will make the mission orders of magnitude more sensitive than Herschel giving us the ability to study the details of star formation in distant galaxies and the physical and chemical processes leading to the formation of planets from the gaseous disks surrounding young stars.  The SAFARI instrument is based on the successful Fourier Transform Spectrometer design employed on the  Herschel SPIRE instrument but now operating over the 35 to 210 μm band.  We are responsible for defining the science requirements for the SAFARI instrument and for modelling the impact of design and engineering decisions on the scientific performance of the instrument.  The instrument consortium is based in a large number of European and Japanese institutes and is led by the Space Research Organisation of the Netherlands (SRON) in Groningen. 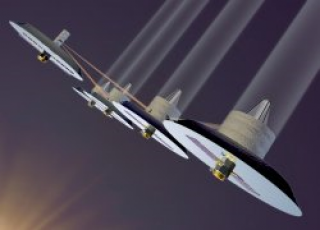 We are currently participating in a design study for a next generation space mission (FIRI - Far InfraRed Interferometer). Current detection capabilities in the 40-400 micron wavelength region are limited by resolution due to the largest deployable space primary mirror (currently the 3.5m - Herschel Space Telescope). Next generation telescopes with folding mirror technology will be able to extend this by two or three-fold.  The very largest future telescope, the James Webb Telescope (JWST), will have a deployable mirror of ~7 m however, even this giant telescope will limit the angular resolution obtainable at long wavelengths substantially and it is only by using interferometric or novel imaging techniques that we can increase the spatial resolution in the FIR. The FIRI design concept will likely employ a two (or more) 10m dish telescopes on either an extendable boom (100m) or on separate formation flying satellites (1km).  The angular resolution achievable would then increase by two or more orders of magnitude allowing unprecedented investigation of almost all fields of astrophysics. 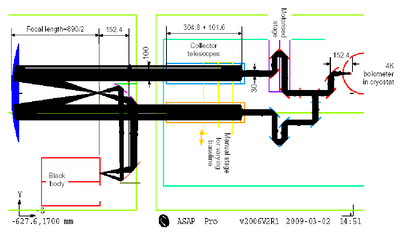 Interferometery is a well established technique for increasing the spatial resolution in a given wavelength region by combining the signals from several smaller apertures to give the same resolution as a much larger single aperture. Most radio facilities use narrow band or heterodyne detection systems which are not readily transferable to wavelength ranges of interest for exo-planet detection and FIR/Sub-mm astronomy (say 10 – 400 microns). Here we must use direct detection wide band interferometers and the design and performance of these systems is not yet well studied or understood.

Several proposals for both FIR interferometers (FIRI in Cosmic Vision and SPIRIT in the NASA Decadal Review) and NIR/MIR exo-planet detection systems (Darwin and TPF-I) have been made, but all have been rejected as the technology is not yet mature enough to start serious study of the missions. With this in mind we are involved a program in collaboration the Space Science and Technology Department (SSTD) of the STFC-Rutherford Appleton Laboratory  to use a facility that allows the development of techniques and technology for space borne interferometers to be developed and different concepts for space interferometery to be tested and evaluated.

RAL, UCL and Cardiff University have jointly built a large lab-prototype of an aperture combining interferometer, in effect a real scale-model of the optical system which will fly on future large space interferometers that use telescopes on separate formation-flying spacecraft. The initial program is to develop the techniques of so called 'double interferometry' for FIR and sub-mm astronomy, i.e., combined spectral plus spatial functions. In this area there are currently several new possibilities and challenges, ranging from new detector devices through to operational and control aspects, and data processing and, now that the facility is fully functional, we intend capitalising on the investment to explore these areas.

The aim of this joint project is for the UK to gain in-depth expertise and technology-readiness in time for next opportunities in this area. These include the next round of ESA’s Cosmic Vision, an ESA TRP item for a test-bed of this type, and a possible Antarctica observatory. 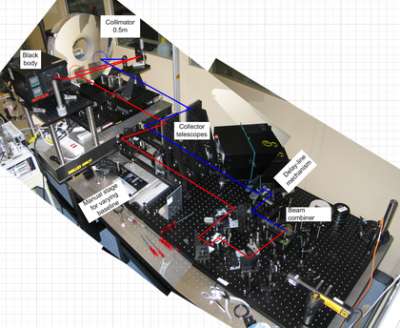 The interferometer test facility assembled in the RAL-SSTD optical development clean room. A cryogenic detector is missing from this view of the equipment but will be placed at the interferometer output to the right of picture. This equipment is currently being moved to UCL for continuation of the evaluation programme.