Ancient Merv project is a research project of the UCL Institute of Archaeology. The project is led by Tim Williams (Gai Jorayev is a deputy-director). The Ancient Merv Project is renowned for its ground-breaking research at Ancient Merv, its pioneering use of the modern methods of documentation and research, its influence on archaeology as a discipline across the Central Asian region, and its contribution to the broader research of the Silk Roads.

There is a long history of archaeological exploration at the site. The site was intermittently explored through the late 19th and early 20th centuries, before a concentrated campaign of fieldwork by YuTAKE during the mid 20th century. Most recently the International Merv Project (IMP), a collaborative project involving the National Institute for the History of Turkmenistan, The Institute of Archaeology, London, and the British Museum, has been undertaking work at Merv since 1992. This project has undertaken research into city walls of Sultan Kala, Shahriyar Ark and Gyaur Kala, and sample excavations within Shahriyar Ark and Gyaur Kala, all of which are currently being prepared for publication.

In 1987 Turkmenistan established an archaeological park to protect the walled cities, some of the immediate extra-mural areas, and selected outlying buildings. This has already done much to improve the basic condition of the site, removing modern agriculture from within the walled areas and generally improving access to the monuments. In 1999 the site was declared a World Heritage Site. However, there are daunting conservation issues and in 2000 Merv was placed on the World Monuments Watch's list of the world's 100 most endangered sites. 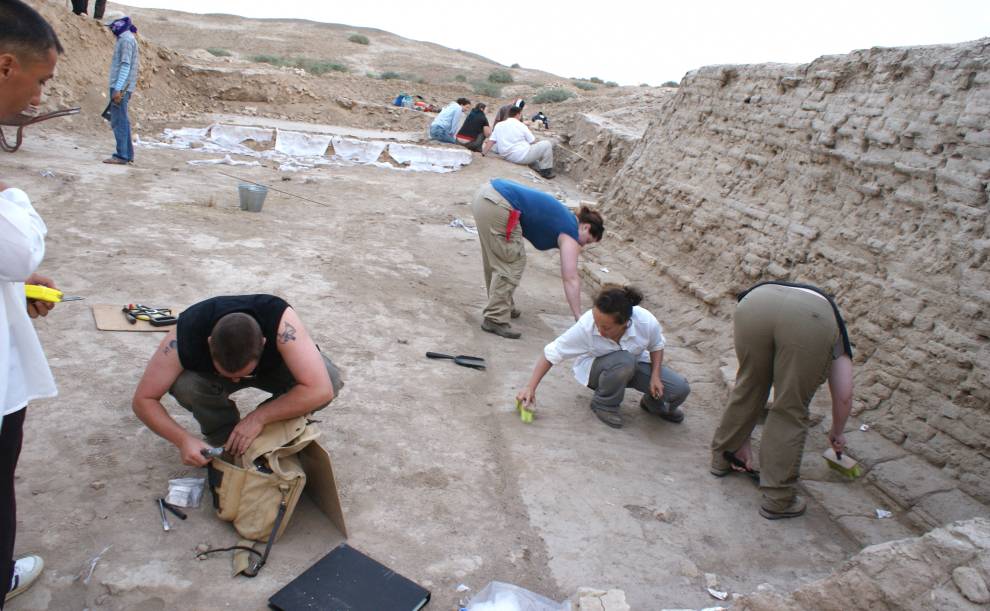 The Ancient Merv project was established in March 2001. This project started as a five-year (2001-2005) collaboration between the Institute of Archaeology, UCL and the State Historical and Cultural Park Ancient Merv, part of the National Department for the Protection, Study and Restoration of Historical and Cultural Monuments within the Ministry of Culture of Turkmenistan. In 2002 this was extended to include a five-year collaboration (2002-2006) with The State Institute of Cultural History of the Peoples of Turkmenistan, Central Asia and the East.

The Ancient Merv project is directed by Tim Williams (Institute of Archaeology, UCL) and Dr Kakamurad Kurbansakhatov (The State Institute of Cultural History of the Peoples of Turkmenistan, Central Asia and the East), with the considerable support of assistant director Dr Gabriele Puschnigg, Louise Cooke, Sjoerd van der Linde and Nikki Harriss (Institute of Archaeology, UCL), and in collaboration with Dr Mukhammed Mamedov and Dr Ruslan Muradov of the National Department for the Protection, Study and Restoration of Historical and Cultural Monuments, Ministry of Culture, and Rejeb Dzaparov, Director of the 'Ancient Merv' Archaeological Park.

The current involvement is concerned with the complex conservation and management issues posed by this remarkable site, furthering our understanding of the site through archaeological research, and disseminating the results of the work to the widest possible audience.

The Ancient Merv project is generously supported by the World Monuments Fund, the J.M. Kaplan Fund and American Express (both with the support and administration of the WMF), the Arts and Humanities Research Council, the Max van Berchem Foundation and the British Embassy in Ashgabat. Please, see an overview of our sponsors here. 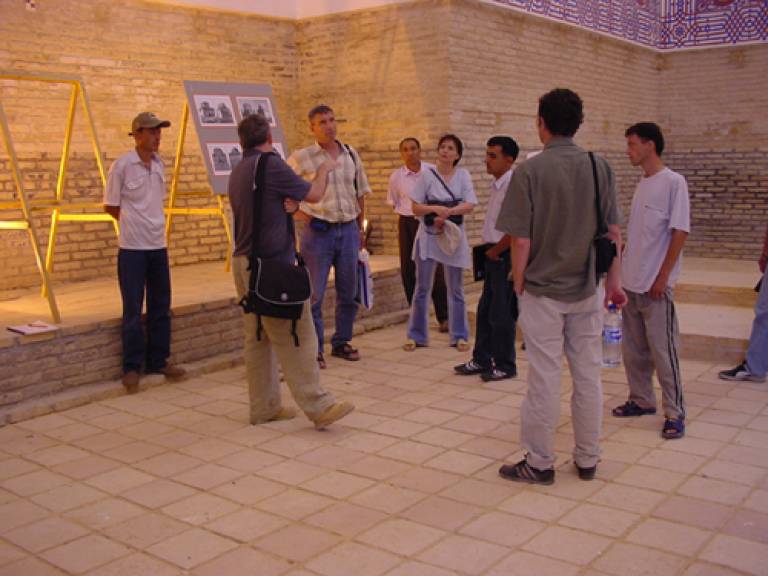 Discussing issues of restoration and authenticity during the training course in June 2005 with staff from the State Archaeological Parks, from all over Turkmenistan.

Given the scale (over 1,000 ha of enclosed urban space) and complexity of the archaeology at Merv it is important that the project has a clear focus and direction. There are so many areas of research and development that are required, across the cities and their hinterlands, that it is not possible to encompass all of these within one project. A detailed overview of the range of projects and activities that are being undertaken can be accessed through left-hand side menu.

The Future
There has been a real sense of common goals and shared vision developed with the Ministry of Culture, The Ancient Merv Archaeological Park, and the international team over the past five years. Shared knowledge, including developing common terminologies, has greatly improved the exchange of information and ideas. It has also developed a stronger knowledge base, which is crucial for informing actions at the site. Capacity building and sustainable approaches to conservation have also progressed, with a major training course in June 2005, supported by The J.M. Kaplan Fund, Inc. and The World Monuments Fund which brought staff from the State Archaeological Parks, from all over Turkmenistan, to work together at Merv, developing skills in digital photography, archaeological recording, documentation and management planning.

The way forward at Merv is for the continued development of holistic site management. This necessarily involves compromises, but the work is stimulating and situated in an ethically more acceptable framework of interactions and outcomes. Real team working is not easy to achieve - it is not just a paper-based exercise - but we feel that it is the only sustainable way forward for international collaboration. There are still problems with the integration of conservation and archaeology, but we are developing approaches to the sustainability of research - exploring past societies through sustainable excavation selection strategies, to present complex and rich interpretations of the past, engendering excitement and enthusiasm, sustaining resources and prompting interaction and engagement. We are also developing greater understanding of the impact of conservation measures on the archaeological resource, and helping to plan the integration of these processes. Knowledge also leads to better decision-making. For example, research in the area around the recently restored mausoleum of Sultan Sanjar, using aerial photographs and satellite images, will enable us to develop a better understanding of the urban landscape in the area of the mausoleum in the 12th century. This is important, both for the management of the site and also for the ways that it can be presented and interpreted to the visitor: as part of a dynamic city in which it was created, not simply as an isolated building as it may appear now.

Above all, two facets of our work are central to the project. The first is capacity building: developing the skills within the Turkmen teams responsible for the site, to face the challenges of conservation, research, documentation and daily management. Ultimately foreign teams will come and go, but the Turkmen people will continue to manage and research their cultural heritage, and they need to have the tools, skills and resources to achieve this. To this end, training courses such as that organised in June 2005 (above) are vital to developing future approaches. The second key area is education. Young Turkmen people are the future of this country and increasing the depth of their understanding of the archaeological resource, and the ways in which they value it, is vital for the future of cultural heritage in Turkmenistan.