My research interests include:

I have two current research projects. The first is a British Academy Mid-Career Fellowship examining contemporary artistic interventions in galleries exhibiting ancient Egyptian material culture. The second is a collaboration with the Horniman Museum and Gardens, London, funded by the AHRC; Mobilising collections histories for institutional change.

My previous major projects include the AHRC-funded Egypt's Dispersed Heritage, a programme of dissemination, cultural events, and artistic responses in Egypt and the UK- co-developed with Heba Abd el Gawad and community partners - to increase understanding about the conditions of export of antiquities from Egypt and their legacies today. That project grew out of my AHRC-funded Artefacts of Excavation project which explored the history of finds from British-led excavations in Egypt, published as a web-resource and my open access book Scattered Finds: Archaeology, Egyptology and Museums (UCL Press 2019).

I have a collaboration with Mirjam Brusius (German Historical Institute London) on the 100 Histories of 100 Worlds in One Object project, a long-term, multi-format initiative that provides a response to the British Museum's History of the World in 100 Objects. Other collaborative projects include a new edited volume on Critical Collections Management with Cara Krmpotich (University of Toronto).

I have edited The Oxford Handbook of Museum Archaeology (2022), which brings together some 50 international scholars and professionals to present an original transnational reference point for critical engagements with the legacies of, and futures for, global archaeological collections.

I currently co-ordinate the following modules:

I am an Associate Professor of Museum Studies. I previously held positions as Curator of the Petrie Museum of Egyptian Archaeology (2013-2017), Researcher in World Archaeology at the Pitt Rivers Museum (2009-2012) and Research Fellow in the Institute of Archaeology and Department of Information Studies (2007-2009).

Between 2013 and 2017 I was the lead researcher and initiator of the AHRC-funded project 'Artefacts of Excavation', which explored the history and legacy of the dispersal of finds from British excavations in Egypt (http://egyptartefacts.griffith.ox.ac.uk/). I subsequently led the follow-on for impact project from this, 'Egypt's Dispersed Heritage' (https://gtr.ukri.org/projects?ref=AH%2FS004580%2F1).

Faces of the IoA - Alice Stevenson 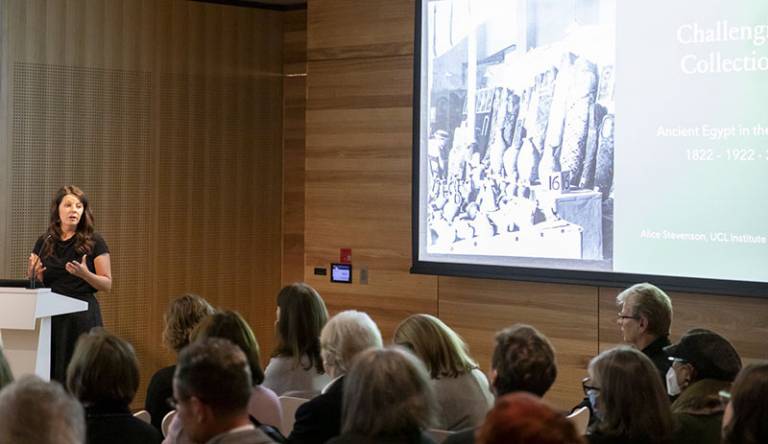