A small cave, with medieval carvings believed to be from the 14th century, has been investigated by a team of archaeologists from Archaeology-South East, part of UCL Institute of Archaeology. 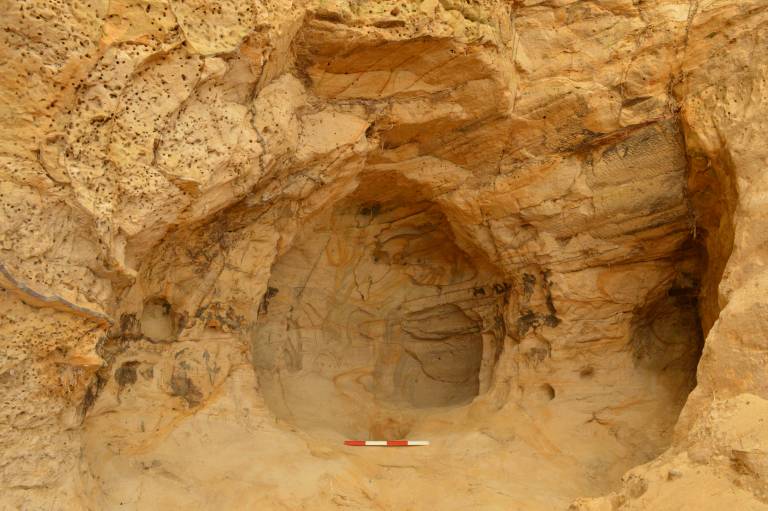 The discovery was made following a landslip near Guildford in Surrey and is considered to be a medieval shrine or hermitage, with links to the nearby church of St Catherine.

The shallow sandstone cave was discovered by a team of rail workers from Osborne carrying out repair works on behalf of Network Rail following a landslip in December.

The cave survives to head height but may once have been much larger, with only a small section surviving the digging of the railway, which cut through the hill in the early 1840s.

After being called in by consultancy firm Arcadis, Archaeology South-East’s historic buildings team abseiled in to record and analyse the cave. They found carving and engraving believed to date to the 14th century.

The principal Gothic shrine or niche is 0.7m high and decorated in inscribed dots with a Calvary cross nearby.  There are a total of around seven or eight further niches and evidence of carved initials and other inscribed markings. Black deposits on the cave ceiling may be sooting from lamps and the remains of two suspected fire-pits were also uncovered in the cave floor.

The archaeologists think the site could even have earlier origins as a place of cult activity long before the construction of the church on the top of the hill in the early 14th century, due to its pre-14th century name of Drakehill - ‘Hill of the Dragon’.

Work is under way to analyse soot and charcoal found inside the cave, which will hopefully tell us more about how and when it was used.