Other users based in the building 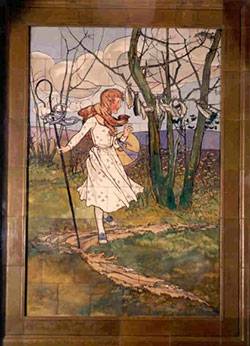 The Wolfson Institute for Biomedical Research is located inside the Cruciform Building at University College London. This imposing edifice is a Grade II listed building designed by the renowned Victorian architect, Alfred Waterhouse, who also designed the Natural History Museum in South Kensington. The Cruciform Building was completed in 1906 and functioned as University College Hospital for over 90 years, after which it was vacated by the National Health Service. An extensive £50 million renovation has restored the building to its original grandeur and has created in its interior a modern and high quality infrastructure which will allow it to operate well into the 21st century.

Substantial grants to carry out the work were obtained from a number of funding bodies, notably The Wellcome Trust (£11.5m), the Higher Education Funding Council for England (£14.5m) and The Wolfson Foundation and Charitable Family Trust(£10m). The additional funding required for the project (£15m) was raised through a Private Finance Initiative (PFI). Jarvis and Rotch Properties were instrumental in forming the PFI consortium, which is responsible for carrying out the refurbishment and for maintaining the building over a 25 year period. The Cruciform Building is an ideal setting for the Institute.

Built in the shape of St Andrew's cross, the wings of this unique building allow natural divisions of laboratories while encouraging team interactions between the different groups of scientists. An initial investment of close to £3m in equipment and facilities has attracted outstanding scientists. The research disciplines include Cancer and Stem Cell Biology, Developmental Biology, Mitochondrial and Cardiovascular research, Neuroscience, Medicinal Chemistry and Proteomics. Further investment in equipment and facilities has seen the institute grow and strengthen.

The Cruciform Building also houses the combined Medical Schools of University College London, The Royal Free and Middlesex Hospitals. Facilities at the Medical School include 300 and 150 seat lecture theatres, a library, a video teaching centre, seminar rooms and an audio-visual centre.

The Cruciform building was designed in 1896 by the English architect Alfred Waterhouse RA (1830-1905) as a replacement building for the earlier University College Hospital on the Gower Street site. Waterhouse, who was particularly associated with the Victorian gothic revival, designed and built over 30 buildings, including Manchester Town Hall and the Natural History Museum. University College Hospital was his last major commission and it was formally opened in 1906, one year after his death. 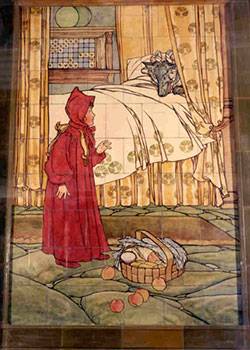 Hospital planning of the late Victorian era generally took the form of separate ward pavilions linked by long corridors. Space between the wards allowed for sunlight, fresh air and ventilation, which were all thought to contribute to patients' well-being. The Cruciform's bold diagonal plan, with a single service core and radiating wings, maintained the virtues of light and ventilation but limited horizontal circulation by stacking the wards in four storeys on a podium containing the support facilities. Each wing was built and opened separately, at a final construction cost of £200,000.

Waterhouse's great skill was in planning, particularly on constricted urban sites. He selected his materials for their proven durability; hard red brick and terracotta dressings in red and earth tones were more economic and less susceptible to erosion in polluted Victorian cities than stone. Practical, hardwearing and easily-cleaned materials were used internally - terrazzo, mosaic and wood block for the floors and glazed bricks for the walls, with marble for the formal outpatients' entrance. 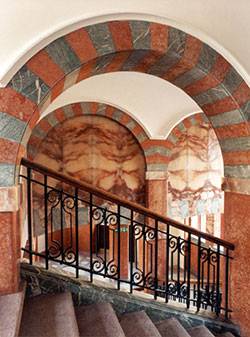 The hospital closed in 1995 and was purchased by University College London. It has been subject to a complete refurbishment to give the building a new lease of life as the Wolfson Institute for Biomedical Research and the pre-clinical teaching facility for the University College London Medical School. As the building is listed Grade II by English Heritage, the refurbishment sought to remove some of the post-Waterhouse extensions to reveal the heavy cornice from ground level. Other extensions were re-clad with sympathetic materials. A new block was built in the service yard for boiler and chiller plant and a new lecture theatre was constructed in the basement between two wings, with its roof hidden behind the parapet wall. Thorough cleaning and remedial work were undertaken to all the brickwork and terracotta, although this was in remarkably good condition for its age. The building was re-roofed and external plumbing was removed.

Internally the layout proved adaptable to its new functions. Over the years as a hospital the original arcades of the central circulation area were infilled, the glazed brickwork was plastered over and the floors covered in vinyl. As part of the refurbishment, as many of these original features as are compatible with the new usage have been uncovered and restored. This restoration work has brought light into the core area and given an increased spatial awareness.