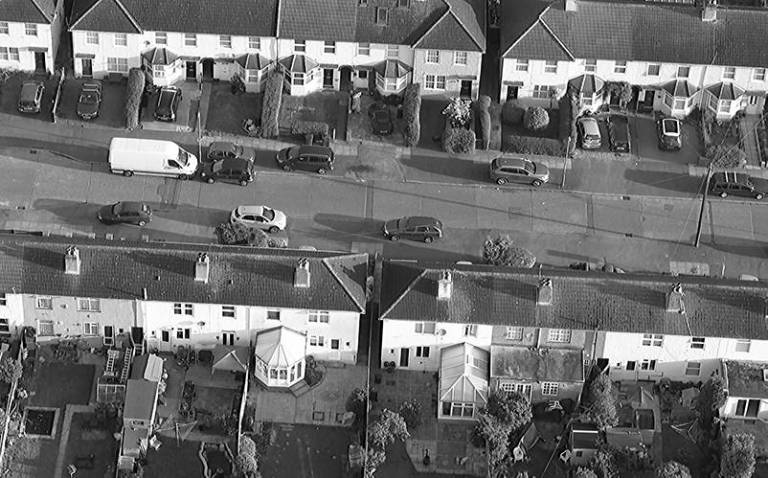 Aeronautica is a new short-film exposing the gradual dominance of our aerial landscape from surveillance, whilst also touching on the alluring beauty this new viewpoint provides. Following a screening of the film, Henrietta and Merijn discuss the production of the work, the nature of their audio-visual collaboration, and the possibilities that film making offers to extend architectural research methods into new forms of artist practice.

About the film
Aeronautica, by Merijn Royaards and Henrietta Williams

Taking its name from a book documenting a famous early balloon journey from London to Weilburg in Germany, Aeronautica tracks the shift in the aerial viewpoint from one of sublime spectacle to military dominance and destruction. It is an aesthetic exploration of the emotional force of the distant ‘God’s-eye-view’, in which the viewer becomes complicit in the beauty and horror of destruction.

Henrietta Williams is an artist and urban researcher, who's practice explores urbanist theories, particularly considering ideas around fortress urbanism, security, and surveillance. Since 2017, she has been a Teaching Fellow at The Bartlett School of Architecture, where she is currently working towards an LAHP funded PhD by design, that critiques drone surveillance technologies and the history of the aerial viewpoint. The output of her research will comprise of a written thesis alongside video installation works, performances, and a printed archive. She also teaches on the Situated Practice MA, where she writes and co-ordinates a module called Mediated Environments, in which students make video work that critically engages with the urban landscape through the essay-film form.

Merijn Royaards is a sound artist and producer guided by convoluted movements through music, art and architecture. His recent PhD thesis and installation series, Altered States, explores the state-altering effects of sound, space and movement from the Russian Avant-Garde’s experiments in the 1920s to today’s clubs and raves.

This event is part of the Constructing Realities Lecture Series, supported by UCL Urban Laboratory.