Undergraduates showcase their research to MPs in Parliament

Two UCL students were among 52 students presenting their original research to MPs in a national exhibition, Posters in Parliament, showcasing the best of undergraduate research from UK universities. 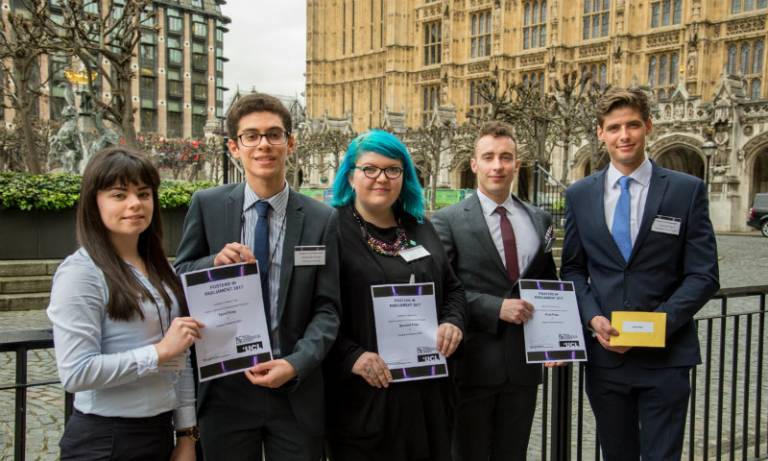 Hilary Benn, Ben Bradshaw and Caroline Lucas were among the MPs who attended the event on Tuesday 14 March. The annual exhibition at Westminster is part of the British Conference of Undergraduate Research, an open coalition of universities dedicated to encouraging a national culture of research at undergraduate level.

Staged this year by UCL, Posters in Parliament showcased the work of 52 students from 27 universities. Their posters explore an impressive range of research topics, including factors behind the success of an invasive slug, the relationship between short-term memory and inner speech, the impact of dieting on mortality in obese adults, the reasons for low participation in physical activity by older South Asians in the UK and the role of the West in the development of the Ukraine crisis.

Each year prizes are awarded to the best posters. First prize was awarded to Robert Clark & Christopher Galvin from Nottingham Trent university, whose research poster focused on ‘Entrepreneurship in the Informal Economy: The Role of Migrant Communities’.

They said: "We're delighted to have won. This prize has real personal significance to us: we both come from a military background so this has proved how we have successfully transitioned our professional experience into academia. Our research was informed by our passions and in particular the volunteering we did in the local Nottingham community so it feels incredibly important to have shared this positive impact to MPs."

UCL students Rachel Yemitan (UCL Bartlett School of Architecture) and Evangeline Chai (UCL School of Pharmacy) were delighted to have presented their own research to the MPS. Rachel said: “I’ve really enjoyed the opportunity to speak to so many different people about a very personal interest.”

The event was organised by Dr Brent Carnell and the Connected Curriculum team from the UCL Arena Centre for Research-based Education following UCL student Amanda Campbell’s win last year for her work on Compostable Tensile Structures. The Connected Curriculum, an institutional initiative launched in 2014, aims to ensure that all UCL students are able to learn through participating in research and enquiry at all levels of their programme of study.

Professor of Higher Education Development and Academic Director of UCL Arena Centre for Research-based Education Dilly Fung, chaired the judging panel. She said: “'I am so impressed by the range and quality of research depicted in the posters. And just as impressive is the passion shown, by all of the students whose work was represented, for tackling vital social and scientific challenges. The studies show not only a range of technical research skills, but creativity and great commitment to their chosen topics. On this evidence, the future is in good hands!”

Caroline Lucas MP (Brighton) said: "Posters in Parliament is a great way of communicating complex ideas and a great way for MPs to interact with students' research. I was just shown a piece of complicated research which I'm sure I would have struggled to understand without such a clear poster and explanation by the student."

The 2017 British Conference of Undergraduate Research meets annually every Spring in a different British university to showcase research by undergraduates at all levels and in all disciplines. The 2017 Conference will be held in Bournemouth on 25-26 April.

“I’ve really enjoyed the opportunity to speak to so many different people about a very personal interest.” Rachel Yemitan (UCL Geography student)

“Posters in Parliament is a great way of communicating complex ideas and a great way for MPs to interact with students' research. I was just shown a piece of complicated research which I'm sure I would have struggled to understand without such a clear poster and explanation by the student." Caroline Lucas MP