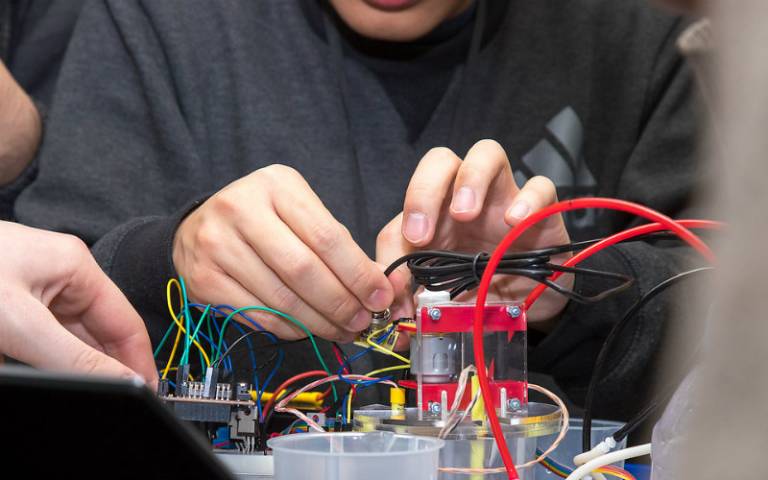 In the UCL physics laboratories, we encourage our first year students to use their creativity and enthusiasm to create their own experiments, with the laboratory script just acting as a starting point.

The students record the work they do in a laboratory notebook. This is then used in an ‘open book’ Moodle quiz (the Data Retrieval Test) at the end of Terms One and Two.

The Data Retrieval Test is a great way to get students to focus on producing good laboratory notebooks - making sure they are up to date and complete.

Giving them the freedom not to answer some of the questions they are asked (but to justify what they select to investigate instead) is a novel way to give students a measure of autonomy.

Giving students room to experiment in their experiments

I want to encourage creativity and to give students permission to fail.

Experimental physics can be difficult and there are times things may go in an unexpected direction.

Sometimes experiments do not go as planned due to equipment issues, or students may deviate from the scripted path while in the lab.

Traditionally, students think that this means that the experiment is ‘broken’ or ‘doesn’t work’.  However, it is in these situations were much of the deep learning occurs regarding experimental techniques.

If we were to ask students to describe the results of that specific experiment in a written test, it could panic some of them if they went down a different path or it ‘went wrong’ as they could feel they would be penalised for that.

To resolve this, we allow the students to NOT answer the question that is asked in the Moodle quiz questions that require a written response.

The instructions the students get for the end of term Moodle quiz page are as follows:

Students are told that this Moodle quiz is the only time in their studies where they can answer a question that is not on in the test if they can justify this.

The overarching emphasis is on using the laboratory notebook as a document of record rather than a repository of predetermined ‘correct’ answers.

If students can justify why they are giving a different answer, not directly related to the question, then they will be assessed on this.

Response from the students

The inspiration for this came from the students themselves.

I had to respond to their desire to go beyond the laboratory scripts and give them credit for doing so. Dealing with experiments that did not go as expected was a natural extension to this.

This gives considerable comfort to students who had experiments that ‘went wrong’ because they can make this the focus of their answer rather than focussing on the results the question may have requested.

We’ve found that students are more relaxed if something does not go as planned and more students are willing to take risks to explore their own experimental ideas.

It also shows them that dealing with problems and identifying what should be done about them is recognised in their assessment, which is a key skill for physicists.

Comments from students on the Data Retrieval Test (DRT)

“This is a good method which I think really works, and I appreciate the fact that it is dependent almost solely on the lab book and not revision”.

”I think it is helped (me) realise how much info I need to put in my lab book, thus making me more competent in the process”.

“I think it's quite a good idea - after all, the way the DRT is designed it's less of a test that you conduct in those three hours and more of one that you conduct across the entire term, and in that respect, I think it has achieved its objective”.

“Knowing that the Data Retrieval Test was at the end of term made me think more about writing key details down in my lab book as I know that it could be in the test”.

5 tips if you want to introduce this in your department