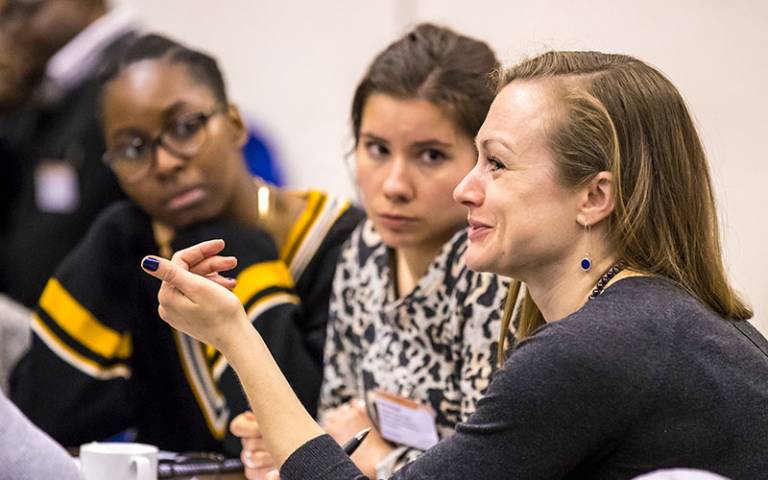 Students identified in the National Student Survey (NSS) that they didn’t feel their voice was heard in the department. The Staff-Student Consultative Committee (SSCC) was highlighted as being an issue.

It needed a change in culture in the department: after taking action and allowing time for changes to embed, NSS scores in ‘student voice’ went up by 9% in the last year alone.

“We asked a neutral member of staff (i.e. someone who was not involved in the SSCC) to explore the issues further with our students through some informal enquiries.

As a result, students were disengaged, saw no worth in the SSCC so often didn’t attend meetings and generally felt like their voices weren’t being heard.

Adapting SSCC meetings to make them a platform for change

We reviewed the format of the SSCC meetings and implemented changes immediately (in 2015). This changes included:

We increased the number of meetings to two per term, with one in the summer term.

Additional meetings were added when needed.

We allowed the students to lead and chair the meetings and had minimal, but key staff present, which included:

The students dominated the meetings numerically – this really made the students feel like it was their meeting.

We did not look to answer all issues in the meeting.

We wanted to make it clear that all issues would be fully discussed and that we would come back to them quickly (within two weeks).

After the meeting the Departmental Tutor/Deputy Departmental Tutor looked to solve any quick-fix or urgent matters arising straight away. These actions were reported immediately to the SSCC chair (or co-chairs) and to appropriate members of staff for wider communication to the student body.

Also, the Departmental Tutor acted as an ombudsman for the students, arguing their case in Departmental Teaching Committee and other forums.

We scheduled Departmental Teaching Committee (DTC) meetings to follow the SSCC meetings and once all issues had been fully discussed both at DTC and through the Departmental Tutor asking for responses for individual staff members, a departmental written response was generated that was communicated to the SSCC chair(s) and posted on Moodle for circulation to the student body.

Although some staff invested additional time in following up the meetings, less staff attended them so overall the time investment for staff was not increased, but the benefits for the department and students were.

Using the opportunity for more feedback

At the SSCC meetings we would often ask for direct student feedback on other key changes we were making.

For example over 2015-18 we also made major changes to assessment feedback, and we used SSCC to test and refine ideas.

This got the students directly involved in change.

Quite often the student SSCC representatives would then follow this up by asking questions of the wider student body and reporting back which gave us further insight into the needs of our students.

Changing the culture of the department

We implemented all the changes in 2015/16 but this wasn’t just a change to a meeting format, it required a cultural change in the staff and students.

The SSCC meetings were always fun and in the end a real community spirit developed where we all felt like we were working together for the common good of the department. I actually really looked forward to the meetings.

The key was that the students felt heard and that it wasn’t a waste of time.

Staff committed to, and ensured, that issues raised in the meetings were addressed and communicated within the promised timeframe.

This built up trust between staff and students and developed a spirit of community and partnership.

“The new departmental SSCC put more emphasis on the student and gave them confidence in their ability to enact positive change. In the meetings it very much felt that we working together to make changes to a department that we cared about”. Carl Sayer, Departmental Tutor, Department of Geography (2015-2018)

“Our new SSCC has put students at the centre of departmental decision making, and helped engineer a different atmosphere in the department.” Jason Dittmer, Deputy Head of Department for Education, Department of Geography

A catalyst for an inclusive and feedback-driven department

This change in culture is having a snowball effect: we’re now actively seeking out more engagement and feedback from our students as we see a huge benefit to both staff and students in working together more closely and getting students involved in departmental decision making.

The SSCC attracts certain, engaged students so the next step for us is to reach out to the rest of our students who may not be so engaged.

The plan is to try to include the Geography Society in our feedback mechanisms to reach students who are less keen on participating in departmental governance.

How to enhance your SSCC: my advice

The SSCC is a fantastic platform for staff and students to communicate and work together.

I would recommend you:

The You Shape UCL website: how student feedback is shaping UCL

Student engagement and surveys at UCL

How have students shaped your department or faculty? Let them know through 'You Shaped UCL 2018'