Encouraging students to reflect through supportive but critical peer scrutiny 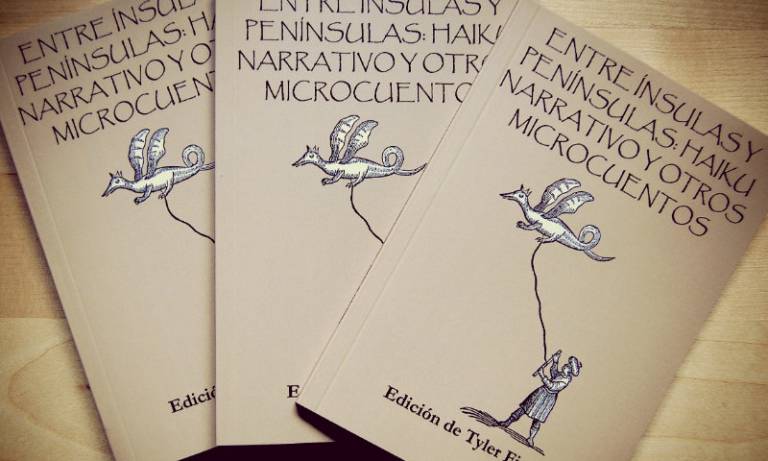 I have designed and delivered a new final-year undergraduate option, ‘Reading and Writing Spanish Microfiction’.

Microcuentos, or very short stories of no more than one page in length, have enjoyed a particular vogue in the last half century in Spain and Latin America. The content was a direct, natural outgrowth of my published research on contemporary Spanish microfiction, as well as my own published microcuentos.

The module ran for the first time in the 2015-16 academic year, and is now in its second iteration. The first cohort of students published a collection of their microfiction in Spain last month.

Bringing together the learning of language and literature

Since joining UCL as Lecturer in Peninsular Spanish Literary Studies in September 2014, I have worked to integrate the literary and linguistic dimensions of the undergraduate courses that involve Spanish.

Administratively, these complementary components of Spanish studies at UCL are categorised separately as ‘content’ and ‘language’ modules, respectively — as if Spanish grammar modules were devoid of content, or as if Spanish literature modules should not comprise a significant amount of language learning.

The distinction is perhaps necessary for organising an appropriate parity between linguistic and literary study in the menu of modules, but it can inadvertently hinder students from recognising their interrelated and interdependent nature.

Establishing opportunities for students to produce original texts in their target language (Spanish) is my strategy for overcoming the artificial separation.

Providing a creative outlet for students returning from a period abroad

Final-year students of Spanish return to UCL after spending four to eight months studying or working in a Spanish-speaking country during their Year Abroad.

Many of these students, I have found, are keen to find an outlet for their Spanish expression, eager to produce written Spanish at an advanced level, within a scope that is not overly daunting. ‘Reading and Writing Spanish Microfiction’ bridges the gap between conventional literary modules and language modules, creating a hybrid intellectual space in which both analytical and creative, imaginative literary writing practices are developed in the context of supportive but critical peer scrutiny.

Creative production in their target language integrates and deepens students’ linguistic dexterity and literary awareness, in both perception and action. It applies students’ abilities in memorable, demanding ways.

Testing the concept on prospective students

I began my preparation for the module by making use of the ‘taster sessions’ at UCL’s widening-participation days and Open Days for prospective students.

To test and refine my teaching on the topic, my sample classes took the form of miniature workshops on reading and drafting microfiction — a taster session for the visitors as well as for me. This proved to be a resounding success with undergraduate applicants and their parents.

The initial weeks of the module focus on critical reading, rigorous analysis, and reflective imitation of microfiction by established authors such as Jorge Luis Borges and Gabriel García Márquez.

Due to my long-standing research activity and publications concerning one of these authors, the students have access to successive, unpublished drafts. Using drafts mean they gain insight into the author’s creative work as a process of revision.

The module then gradually progresses from imitations to allusive compositions to more original drafts, thereby grounding our discussions on published precedents and alleviating the paralysing pressures of individual ‘originality’.

Its use is informed by the conviction that students learn to internalise the criteria for different levels of intellectual performance through review of one another’s work.

To some degree, the classroom activities mirror the pedagogic practices of studio-based subjects in art and design faculties in which periodic review or ‘crits’ are an integral part of the student learning experience.

Developing a portfolio for summative assessment

Outside of the classroom, students collaborate on drafts via the module’s Moodle forum.

Students select five of their compositions for their final portfolios, which include critical self-commentaries on their work. The portfolio (in lieu of a desk examination) and one standard essay on published microfiction constitute the module’s summative assessment.

Taken together, these forms of assessment display the students’ critical reflection and creative application working in tandem.

Stages of assessment in the module

My pedagogical design for ‘Reading and Writing Spanish Microfiction’ deliberately instituted a succession of feedback mechanisms:

Through these measures for receiving criticism on their creative work, students learn how to respond productively to critique, how to incorporate – critically and selectively – suggestions for improvement, and how to engage, reflectively, with the reception of their work more widely.

Students present their work to the public

The students showcased their work, in Spanish and in translation, at UCL’s Festival of Culture (2016).

An anthology of 50 pieces of their best microfiction, Entre ínsulas y penínsulas: Haiku narrativo y otros microcuentos, was published in Seville (Asociación Difusionados, 2017). Publication in Spain affirms the quality of the students’ work and the high level they have attained in Spanish.

The student-authors are now active participants in contemporary literary production, and are already in dialogue, directly and indirectly, with a readership and with other authors in their target language — as attested by a letter the class received from José María Merino, a leading Spanish writer and member of the Royal Academy of Spanish. For these published student-authors, the complementary, interdependent nature of literary and linguistic learning could not be more apparent.

This is the first full module dedicated to creative writing in Spanish at UCL — and, indeed, it is the first of its kind in the wider, federated University of London.

The class worked equally well as an advanced Spanish language class and a seminar in literary technique. All around, this was university teaching of the highest standard.’ Dr Adrian Pearce (Peer Dialogue observer, 1 Mar 2017)

Tyler’s module, although still relatively new, has played an important role in encouraging a shift in thinking in a department that remains largely wedded to conventional assessment formats – the essay, the literary commentary, translation into and out of the target language, etc. – and to the creation of an emerging culture more open to innovation in curriculum and assessment design.’“  Anthony McNeill (SELCS Undergraduate and Examinations Tutor

Undergraduates showcase their original fiction at book launch: a news story about the students publishing their work