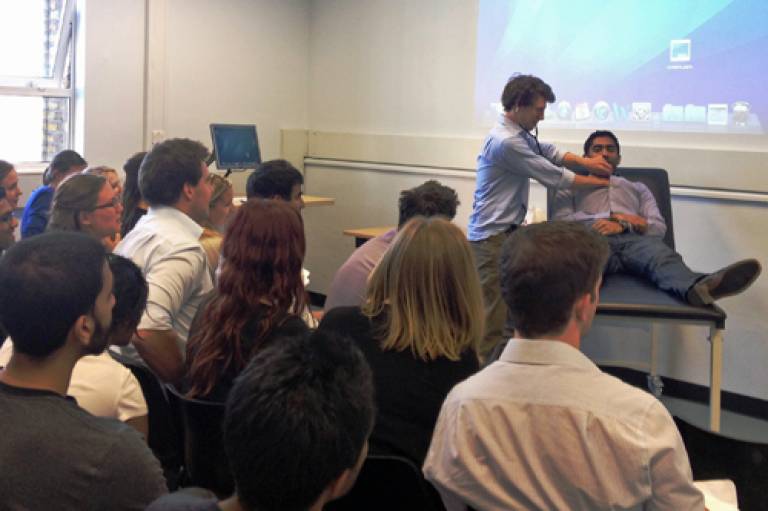 Final-year medical students can opt to take a module in which they teach younger students about life on the ward.

The Peer-Assisted Learning Scheme is an optional four-week module that final-year medical students can take.

In the first week we give the Peer-Assisted Learning Students (PALS) an intense training course including a two-day ‘tip school’. They get taught the basics of how to structure a lesson plan and ask effective questions, and practise their skills in a small environment.

The PALS are split over three sites:

Each has a head PALS who is responsible for allocating the teaching sessions.

There’s also an overall PALS lead who oversees all three sites. In fact, the whole process is student-governed – the students themselves choose who the leads will be.

In the past, some groups have asked whether they really need a leader but I do insist as I want to encourage the development of leadership skills in whoever is willing to take up the role. I like to give a lot of responsibility to students because at the time of the module they’re going to be doctors in less than a year and as a doctor you need to be responsible for yourself, your team and your patients.

The PALS generally teach between five and eight students per session. There are one or two classes which can be taught in pairs but they mostly do it individually. Each PALS gets observed at least once so that we can see their skills and give them feedback – but I haven’t come across a bad teacher yet.

The assessed components of this module comprise teaching and also a study project, which can either be done individually or as a group. We supply a few ideas but students can also think up their own project, for example in September some students made videos on ‘Things you were afraid to ask’, covering how to bleep a doctor and that kind of thing.

In the last week of the module, the students present their projects to the rest of their group.

The benefits of peer-assisted learning

There’s a lot of evidence to suggest that peer-assisted learning works really well.

The primary reason for this is that younger students feel more comfortable asking what they perceive to be ‘stupid’ questions.

The PALS have gone through the same thing as the students they’re teaching just two years previously so they are better equipped to give the junior students insights into the ‘hidden curriculum’ – that is, knowledge that’s not part of the official syllabus, things like how to please the consultants, behaviour that might upset the nurses and so on. It’s about the unspoken things that aren’t mentioned in textbooks or lectures.

Opening up career pathways into teaching

In the past, the PALS scheme has run twice a year and we’re always oversubscribed, so this year we’re going to run it four times.

As well as training fourth-year students, the PALS sometimes teach first and second-years and nurses – it extends to many different arenas. Those that do the PALS module in September are also asked to run an exam, for which they write the questions and set the mark schemes.

When I did my medical training here at UCL we didn’t have anything like this. I would have found it very beneficial because I would have felt more comfortable asking questions to other students – there is a real fear when you’re a medical student that doctors will judge you or mark you down if you ask a silly question!

A lot of the students who take this module are interested in teaching as a career choice;  a lot of them end up becoming medical educators at some point. There are nine teaching fellows in my office and two of them are ex-PALS.

PALS enjoy acting as big brothers or sisters to other students and it’s well-perceived by the students, both those teaching and those who are taught by PALS. I enjoy running such a novel scheme – I don’t think many other medical schools do it.

Students connect with each other, across phases and with alumni: Dimension six of the Connected Curriculum.