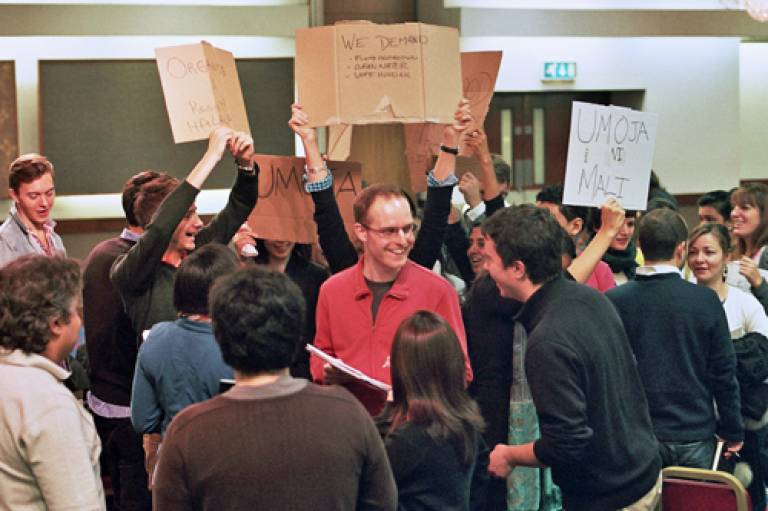 Master’s students from the DPU work on a real-life scenario in order to understand the complexities of planning.

Each of our six Master’s programmes has a practice module attached to it in which we explore issues surrounding applied development.

This particular workshop brings together all 180 Master’s students studying at the DPU to run through a real-life scenario based on a development problem that’s actually happening somewhere in the world.

This year, we looked at the issue of equitable land use and affordable settlement in Dar es Salaam.

Expansion of the main port means that communities are being relocated to other parts of the city, which is very contentious. Community groups have lobbied the local municipality but there are also private interests at stake – for example, expanding the port means increased trade and therefore helps middle-class traders and businesses – so lots of contested interests are at play.

We divided the students into eight groups of around 22, with each group representing a different stakeholder through role play, from international agencies, national government and local government to members of civil society and shack-dwellers.

The teams identified the interests and motivations of their stakeholder and then moved on to employ a diagnosis of the situation.

We showed them how to use the 'Web of Institutionalisation', a diagnostic tool developed by Caren Levy, the former Director of DPU and now a Senior Lecturer.

It helped the students understand the different factors that affect a stakeholder’s interest in an issue.

The students went through the different elements of the web and applied this to the issue of land use and settlement in Dar es Salaam as it relates to their stakeholder so that they could better understand the opportunities that might exist to advance their interests.

Using video and other media to gain insights

In preparing this exercise, two members of our team went to Tanzania and filmed material (see video below).

This meant that we were able to show the students video clips, photos and real-life stories of the people they were role-playing so they could get a real feel for the diversity that exists within each stakeholder group as well as between the groups.

We provided newspapers for them to read and some were in Swahili, which was a bit of a challenge, but if you’re a development planner then you need to use all the resources available to you in order to understand the plight of the people you’re working with.

Luckily Tim Ndezi, the Director of CCI (the Centre for Community Initiatives), a community-based organisation in Dar es Salaam, was there and able to translate! Tim was an on-hand expert who really helped the students understand the dynamics of the situation, keeping things as realistic as possible.

After using the diagnostic tool, the students identified opportunities to collaborate with other stakeholders in order to get their idea of equitable land use happening.

A residential week of mock meetings

During the residential component of the workshop – the programme was split between London and a residential site in Windsor – we set up opportunities for the students to negotiate with each other, sending delegation groups to mock meetings. There were donor meetings, press conferences, and more casual shack-dweller gatherings, so different stakeholders would attend different sessions.

While the week was entirely student-led, staff were on site facilitating the process so that if the students were going off track we could steer them back on course. Staff members also sometimes had roles to play themselves – for example one was the head of UN Habitat and another led the press conference.

After the negotiations we had a round-table session in which the students started to present their main recommendations to move towards a strategy of equitable land use and affordable settlement.

Because of the negotiation process they’d been through, by the end they came up with a strategy that didn’t just work for them, but for a range of stakeholders – and they’d identified the people that have the power to make the strategy workable, giving it real teeth.

It meant that the work done during the week will, to some extent, have an impact on the real-life situation: Tim, who observed it all, will use whatever material he can in his work with CCI.

The benefits of a residential week

There is a residential component to this workshop every year, and that’s a conscious decision: it presents an opportunity for students to get to know people on different courses, building wider connections.

All of the students come into the scenario with their own experiences, and giving them the chance to learn from each other as well as the staff and the case study is brilliant.

Perhaps more importantly than that, though, is that it gives them space to negotiate and explore their ideas.

It can be quite difficult to do that at UCL with students moving from one room here to another room on the other side of campus – we often lose half along the way! It’s good to have them all in one place and say, “Right, this is all you’re going to focus on for the next few days and by the end of the session we want you to have developed a negotiation strategy to take forward when we go back to London.”

The week isn’t formally assessed but that hasn’t affected student participation or enthusiasm – in fact it might encourage it a bit, as they don’t feel as much pressure.

We keep attendance records for each session and every single student turned up to the wrap-up session on the final day. They’ve been through the entire week and want to find out what conclusions were reached; they remain enthusiastic.

Planning a city-wide scenario of the first time

The DPU has been using scenario-based learning for several years, but this was the first year that we focused on a problem at the city-scale.

A great deal of resource and investment went into the development of this case study, so we’ll use it again next year but in a different form, catching up with the story to see what’s changed. We’ll be able to explain to next year’s students the ways in which the scenario has moved on since this year’s cohort worked on it.

Including myself and Ruth McLeod, about 10 or 11 staff members were involved with the planning of this scenario and more were drafted in to help during the week.

It was worth the effort as the students will get a great deal out of it – they don’t just complete the week and that’s the end of it, it will be used as a constant point of reference in teaching throughout the year.

They're going on an overseas field trip later in the year and will be encouraged to use the lessons they’ve learned on this scenario at that point.

These students are on one-year Master’s programmes and that’s not a very long time in which to instil in them how to be a good planner. It’s absolutely vital that they can empathise and understand the complexity of real-life situations and that’s why scenario-based learning is so important.

A lot of the case studies we go through in class time are a little bit ‘managed’; we edit them so that they can be done in the time that we have.

The Dar es Salaam scenario is very raw and very real, something that’s emphasised when we show the video clips and photographs. Coupled with role play, they create a level of empathy that is difficult to achieve in more abstract exercises.

If anyone teaching on another programme wants their students to really experience the complexities of the situations they’re being taught about, I would definitely recommend doing something like this.

Windsor Workshop at the DPU

Read more about the Web of Institutionalisation created by Caren Levy