Dr Richard Day explains the ways in which he prepares his Master’s students for research projects and practical lab work. 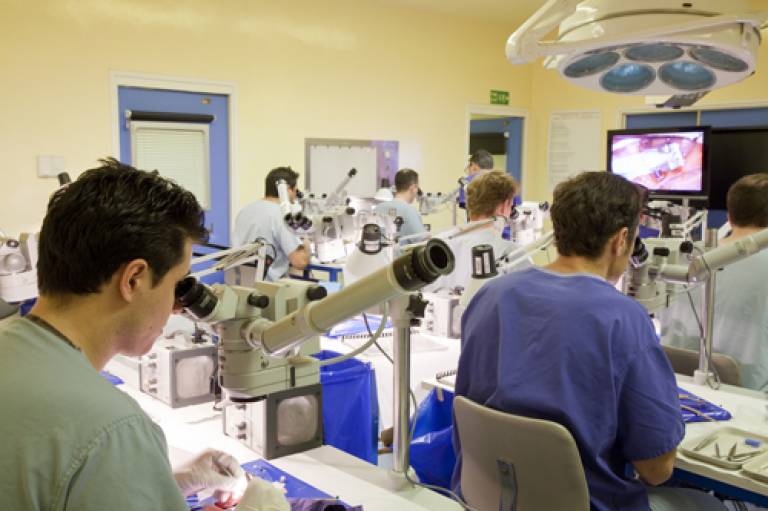 Students are taught how to behave in the lab through online videos.

They also practise reading and analysing journal articles through a journal club so they’re better prepared for doing literature reviews.

Bringing students from different backgrounds to the same level

Due to the interdisciplinary nature of the course, we have students from all sorts of backgrounds – Physics, Engineering, Maths, Biology – and they often arrive with very different levels of experience and understanding.

Getting them all up to the same standard is difficult in the time that we’ve got; there’s sometimes an expectation that they’ll go off and take responsibility for ensuring they’re up to scratch independently but that postgraduate, self-directed mindset can take a while to kick in!

During my probationary period as a Lecturer I had done an Arena teaching course and I enjoyed it so much that I took a further course the following year.

As part of that I had to come up with an idea showing how I could apply what I’d learned on the course to my own teaching, and that’s where the idea for the virtual laboratory and journal club came from.

The cost of tissue culture means that we can’t afford to give students huge amounts of time in the lab, so every minute counts.

If we’re having to take time out to explain how to behave in a lab, they get less time to actually spend on the practical, so I applied for a Teaching Innovations Grant which funded me to buy a video camera and tripod and pay two students to create videos explaining different aspects of lab procedure.

These included, for example, septic technique (which keeps everything sterile) – a relatively straightforward concept but one that requires practice as it’s easy to get wrong.

The online video gives students an overview of what septic technique is and after they’ve watched it they complete a quiz which gets them to list the mistakes that the actors made during the video – things like not wearing their lab coat properly, touching things they shouldn’t be touching and so on. Students are required to look at these videos and quizzes before starting the course so that the knowledge they gain can be fed in right from the beginning.

Since introducing the virtual lab practice, we’ve noticed a marked improvement in how students behave and understand things in the practical sessions. It also means that they come ready to ask questions which before might not have occurred to them until they’d left.

My other idea was to introduce a journal club.

One component of the course is a research project, for which quite a large proportion of the mark is based on a literature review.

Many of our students have never picked up a scientific journal until being on this course and we want them to be able to critique articles so they can incorporate ideas into their own work.

The idea of the journal club is to allow students to practise this before actually doing their projects.

On Wednesday mornings, two people present one journal article each and at the end of the session we use personal response systems to ask the rest of the group whether they think the presenting pair have understood and analysed the articles properly (the scores are kept confidential but contribute to a component of the coursework mark). They are also required to upload a minute paper to Moodle after the session.

Initially, the students weren’t keen on this element of the course as they didn’t want to volunteer to present but by the end of the year they were asking if we could run extra sessions, so they do see the benefits.

For the first year of the journal club, we ran it all virtually on MyPortfolio, but it took a lot of prompting and not everyone participated, so we decided to run assessed face-to-face sessions instead which has been much more successful and also enables greater levels of interaction than students get in their lectures or online.

Benefits for academic staff as well as students

All this is beneficial to us as teachers as well as to the students: they are better equipped to do their own research work and that in turn feeds into our own research programme.

From what I understand, colleagues in Immunology and Pharmacy are also interested in working in this way so hopefully it will benefit them too.

If other people were planning on doing something similar to us, I’d advise them to plan well in advance and talk to the other lecturers on the course.

Some people can worry that it will create an extra workload, but actually once you’ve prepared the initial tutorials it saves you time in the future.

I would also definitely recommend people apply for a Teaching Innovations Grant – it’s a great way of getting your ideas put into practice.