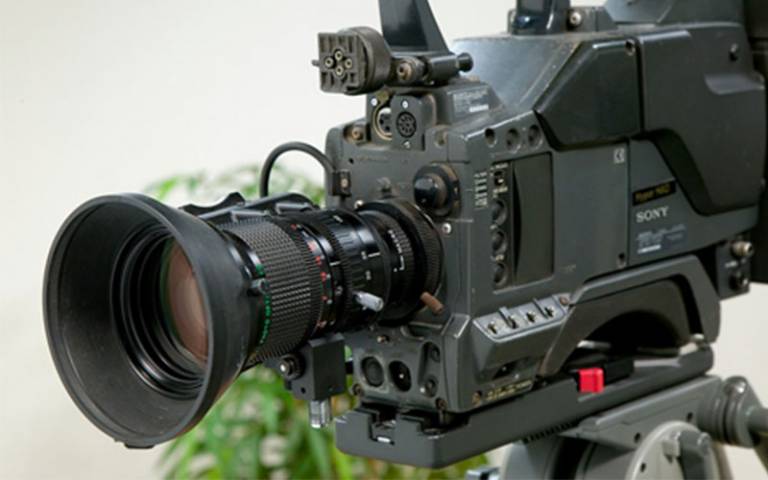 "Students carry out a role-played family consultation with actors and are filmed in order to assess their clinical skills in as realistic a context as possible.

In the ‘Building and Maintaining Therapuetic Relationships’ module, which we teach on the first year of the MSc in Developmental Psychology and Clinical Practice, students are taught both the theory and clinical skills behind building up a therapeutic relationship with a child and a parent.

We introduce the students to role-play from day one by acting out a role-play in a lecture, with the teachers playing the roles of practitioner and parent and a young actor playing the part of a child.

The students are then shown video clips of us and other practitioners in various scenarios over the course of the module and they practise role-play themselves in tutorials. Role-play is crucial in this module because it allows students to practise skills and try different ways of saying things to children and parents before actually doing it in real life.

They’re also allowed to bring in video clips of themselves conducting practice sessions with friends or young family members and receive feedback from the group and tutor on how they could improve (they are each given a basic video camera at the start of the course).

Watching themselves back on video enables the students to develop an ability to reflect on their own practice, which is an important skill for Child and Adolescent Mental Health Service (CAMHS)* practitioners to have.

When we show the students the clips of ourselves and the professionals we always tell them that they’re not perfect scenes; there is never a perfect way of doing something – there’s always room to reflect on and discuss what you’ve done.

The students really enjoy the way that these scenarios are framed in a ‘warts and all’-type manner because in real life you will sometimes say something that creates tension, or be surprised by something the child says, and it’s good to think about how you might react when that sort of thing does happen.

Video as a means to share a private domain

The other element in our decision to use film so extensively is that therapy is a very private, confidential domain and it’s not easy to see what happens inside a therapy room unless you’re actually the therapist – we thought that filming role-plays was the best way to get around that issue.

While we couldn’t use real patients, we thought that if we also didn’t use real children it just wouldn’t be effective, so we asked some children from a local drama school to act in the films. They were so good that we realised role-plays with children could be a good way of assessing the students, so we decided to invite the actors to come in for an assessment day during which we would film students meeting parent/child pairs for 30-minute introductory meetings.

A week before the assignment, the students are given a GP’s referral letter just as if they were working in a CAMHS team. The letter provides a basic level of information about why that child is being referred – for example, it might say, “I would like to refer this nine year old to you because her parents have noticed that she’s been quite anxious over recent weeks and is having difficulty falling asleep at bed time,” and there may be some other significant bits of information within that letter.

The students then have to act the part of a mental health practitioner who is seeing a family for the first time in a CAMHS setting. They are expected to demonstrate certain core competencies during that session, and to explain basic things like the role of the practitioner and the structure of the session.

Both the ‘parents’ and the child actors, who are between eight and ten years old, are given information about the child in the role-play – symptoms, who they live with and so on – in advance, but it’s not scripted, they just ad lib based on what they know of the character’s situation. We’ve been really impressed with the actors – they know that if they dry up or come out of character that’s fine, but that very rarely happens.

A flexible situation where students can demonstrate skills

It works really well because although they’ve all been given the same character and referral letter to work with, the children could come up with literally anything based on that so there’s a freshness to every single role-play you see; they’re all unique. That was initially one of our concerns because the students are all being given a different experience, but whatever the child brings to the table gives the students the opportunity to demonstrate their skills.

One child did come out of character and that threw the student, which she felt was slightly unfair, but we’re assessing the capacity to manage when things surprise you – that’s a key clinical skill – so it actually gave her an opportunity to demonstrate her strengths in that area.

The students are in therapist mode right from the start: they go to a CAMHS building, pick the parent and child up from the waiting room, take them into the therapy room (where the cameras are already on) and start the session.

The only thing that makes it slightly different from a real-life setup is that the chairs have to be angled towards the camera so we can pick up as many facial, non-verbal cues from everybody as possible.

Reflection as part of the assessment

Afterwards, each student receives a DVD of their session and they have two weeks to look at it and write a 1,500-word reflective commentary based on what they’ve observed about their own skills – for example, they might say, “I was really nervous at that point so I was less warm than I normally would be.”

We also encourage them to think about their impact on the child and the parent and finally their use of themselves as people – whether they might have asked something in a particular way because of a personal experience and so on.

The assignment is marked in two halves: 50% goes on the role-play itself and 50% is based on the reflective commentary.

It could be that they were a bit weak in demonstrating certain skills but they raise their score by conveying their awareness of that in the reflective commentary. This reiterates the message that it’s not always about getting everything right: things can go dreadfully wrong in a role-play but you could still get a really good mark overall.

Everything’s double-marked on this course and we thought it might be hard to come up with marking criteria that would be explicit enough for us to get a good level of agreement on marks, but we’ve broken it into four categories, each with four or five specific competencies within them, so it’s quite precise and this year there were only one or two points between the different markers’ scores for most students.

This way of assessing students is slightly more time intensive than some of the other assessment methods we use, but we think it’s worth it because it really does capture both clinical and reflective skills. Plus, when we ran this for the second time, the students who had done it the previous year came back to help supervise the children between filming and they all said how much it had helped to prepare them for their work placements.

Advice for colleagues who want to try this

If you're considering developing a similar assessment practice, we advise you to think carefully about exactly what you want to assess and the marking scheme.

We also did a practice trial with Nick doing the role-play himself to check that it was actually possible to fit all the skills into a 30-minute slot and tried writing a reflective commentary ourselves. We then talked it all through with Rosalind Duhs [a UCL Arena Fellow for SLMS] which was really helpful – she alerted us to some things we hadn’t thought about and helped us realise we were allowed to be much more creative with our assessment methods than we had thought.

Student feedback on the process

Interestingly, perhaps partially due to their experiences on this module, our students are beginning to see the assessment process not just as a duty at the end of a course but as part of the learning process.

The student feedback we received for another module which was assessed by exam said that it didn’t sufficiently capture what they’d learned that term, and as a result we’re rethinking how we assess that module.

They’re definitely more engaged in thinking about the type of assessment that is best suited to what they’re been doing; it’s very encouraging."

*CAMHS is an NHS-run community outpatient service for young people with emotional or behavioural problems.

The Anna Freud National Centre for Children and Families postgraduate courses, in partnership with UCL.