Monday 18 November - Guest Panel Event: Why and How to Shake the System

As debates surrounding decolonising the curriculum have raged in the media over the last couple of years, student interest in these campaigns across the Joint Faculties is extremely high. There have been local departmental initiatives speaking to this agenda, and for some people in the Joint Faculties, this is an area they have been working in for years – long before the term was popularised/jargonised in the media.

That said, there is still uncertainty amongst many (staff and students) about what it means exactly, why, when it is important, and how it can be achieved.  This panel event provides an opportunity to investigate these questions with people who have been involved in and/or vocal about decolonised curricula in Higher Education over the last few years. Join us as we come together and discuss the importance of finding new ways of seeing the canon. The event will be followed by a drinks reception.

Paul Gilroy - Professor of the Humanities and Founding Director, Centre for the Study of Race & Racism, UCL

Lola Olufemi is a black feminist writer and organiser from London. She is the co-author of A FLY Girl’s Guide to University: Being a Woman of Colour at Cambridge and Other Institutions of Power and Elitism (Verve Poetry Press, 2019) and the forthcoming book Feminism, Interrupted: Disrupting Power set to be published by Pluto Press in March 2020.

Dr Meera Sabaratnam is Senior Lecturer in International Relations. Her research interests are in the colonial and postcolonial dimensions of international relations, in both theory and practice. She has worked on questions of decolonisation, Eurocentrism, race and methodology in IR. She has applied these concepts to the analysis of international development aid, peacebuilding and state-building, most recently in her book Decolonising Intervention (2017). Her regional interests are in Southern Africa and the Indian Ocean region. Currently, she is working on questions of race in IR theory and postcolonial historiography of the First World War. Meera is also the Chair of the Decolonising SOAS Working Group. 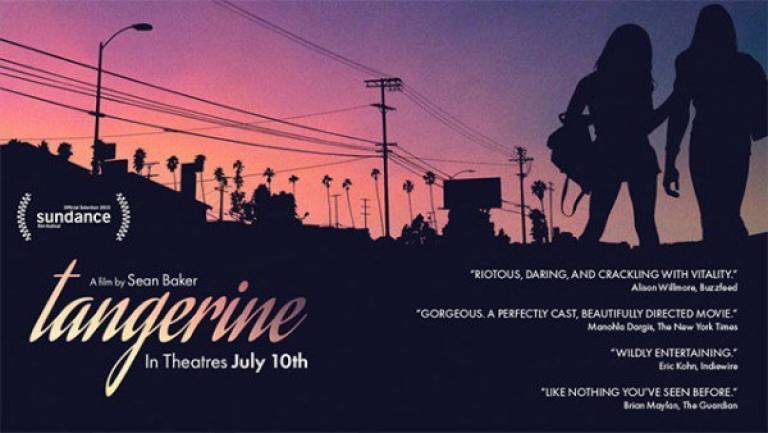 Tangerine, a break-out hit from the 2015 Sundance Festival and one of the Sight and Sounds (BFI) films of 2015, will be shown as part of Decolonising the Curriculum week.

Tangerine is an American comedy-drama film directed by Sean Baker and written by Baker and Chris Bergoch, starring Kitana Kiki Rodriguez, Mya Taylor, and James Ransone. The story follows a transgender sex worker who discovers her boyfriend and pimp have been cheating on her. The film represents a major leap for transgender people on film and was also shot entirely on an iPhone 5S. For more info see the reviews below.

AnthroLens is a well-established student film society within the department of Anthropology. Through regular film nights, they explore anthropology in popular cinema and ethnographic films.

In a previous decolonizing the curriculum film night, they deliberated on Britain’s imperial (later referred to as commonwealth) troops in World War Two by screening three short films produced by various British information and propaganda departments during and shortly following, the war. Discussion afterwards focused on the implications of such videos for historical and contemporary narratives surrounding the war and the commonwealth, on how we teach these narratives, and on the media, we use to do so.

Wednesday 20 November - Decolonising the Curriculum in SHS and A&H: A Joint Faculty Conference

In this mini-conference staff and students from the Joint Faculties will share experiences of what they have done in their own departments to ‘decolonise’ their curricula. How one interprets decolonisation is likely to be subject-specific and there are many different types of activities that could be associated with it. These might include, but are not limited to, reviewing reading lists and syllabi, creating new modules or revamping old ones, creative use of archive materials and other media, departmental societies and working groups, subject relevant reading groups. In this session, student and staff teams will present the work they have been doing in their department with particular emphasis on presenting the lessons they have learned and advice on how it could be tried in other departments.

This session will be of interest to staff and students who would like ideas about what kind of activities they could try in their own departments by learning more about initiatives that have been going on elsewhere across the Faculties.

Philosophy has a traditional canon composed almost entirely of wealthy white men, some of whom were notably involved in colonialism and racist thought. It is also a profession lacking in diversity, becoming whiter the further up the ranks one looks. The 'Minorities and Philosophy' (MAP) movement, which has a chapter at UCL, seeks to challenge this. I will talk about what we do with MAP, and about some of the particular issues that decolonisation raises for philosophy.

“The Other” in UCL Library Audio-visual Collections by Smith Mesa, V.  (Library Services)

This presentation presents work on a project entitled: 'The Other & the Moving Image', which examined not only the relationship between the moving image and different art forms but also, and in particular, how the moving image helps to visualise 'otherness’, making marginalised voices and cultural experiences visible. The project was based on UCL Library collections, disseminating our audio-visual materials, and identifying areas for improvement. Through presenting what was done in the project, the presentation demonstrates the significance that relevant library collections have to an academic curriculum, especially in finding ways to 'decolonise' curricula, focusing on cultural awareness, human rights, disabilities, race, gender, LGBT and social equality.” The project received a grant from UCL Connected Curriculum's Liberating the Curriculum Working Group and was supported by UCL Institute of the Americas, UCL MA Film Studies and MA African Studies. For more information, you can follow the links below

We will talk about how we are decolonising the topics, examples, authorship and classroom in our discipline.

In this talk we will discuss how undergraduate students in Anthropology came to design their own module – ‘decolonising anthropology’ , which will run for the first time this academic year. We will talk about the problems and opportunities that arise when students are actively involved in curriculum design.

In this presentation, we will explain how we used content analysis to code Political Science reading lists. The aim was to find out how inclusive they are in terms of gender and ethnicity of the authors as well as the range of topics and approaches covered. We also produced infographics to make these results easy to communicate. We will give an overview of our findings as well as explaining how we went about it, how we will use the data and infographics, and how other departments could run similar projects.

Other members of the team who can't join us but whose work was crucial to the project include: Jotepreet Bhandal, Iweta Kalinowska, Robert Lipinski, Fiona Shilston.

This event is being postponed until after the election.

We will be rescheduling in the new year and anyone who has already registered for a ticket will be contacted with further details and given priority booking. We sincerely apologise for any inconvenience this may cause and hope to see you at the rescheduled lecture.

Thursday 21 November - Decolonising the Curriculum: Workshop on a Learning and Teaching Toolkit for Programme and Module Convenors

This workshop introduces a toolkit that is intended to act as a briefing for programme and module convenors (including students interested in module design), on what ‘decolonising’ learning and teaching might entail. The toolkit was developed by the decolonising SOAS working group and a member of this group will be running the workshop.

They say "At its root it is about making what we teach and how we teach it more responsive to the problems of colonial and racialised privilege and discrimination within our teaching practice. This is not a set of prescriptions but a set of suggestions and ideas for colleagues and students to think through, individually and collectively. It is animated by a spirit of critical dialogue within education and is also connected to wider institutional questions about the principles and practices of good teaching – in particular work on racialised attainment and inclusive pedagogy. Its aim is to stimulate reflection, dialogue and changes in teaching practice that reflect our values as an intellectual community and as an institution." (Decolonising SOAS Working Group decolonisation@soas.ac.uk).

We are incredibly grateful to our colleagues at SOAS for agreeing to share their valuable experience. Places on this workshop are open to staff and students. Places will be limited (so book early!) and some pre-reading is suggested.

Join us for an evening of performances of spoken word and theatre monologues in the Haldane Room from 6.30pm onwards to pay homage to the voices of decolonisation and diversity. We’re delighted to welcome Gender and Feminism Society to perform poetry readings and Drama Society to perform ‘Out and Allied’ theatre pieces - extracts from their very successful Pride II LGBT+ showcase. Snacks, drinks, and wonderful company will be provided. We look forward to welcoming you to what should be a fun and engaging event, celebrating the end of an exciting, informative and engaging week!