Rice is highly diversified. It is cultivated from highly managed and irrigated paddyfields in temperate northeast Asia (approaching 40 degrees of latitude) to metres deep water in tropical river deltas; it is cultivated from sea-level to more than 2000 metres in parts of the Himalayas (in Nepal and Yunnan). Across this ecological and geographical variation rice has a wide range of local ecologies. One of the key aspects of variation is how wet the conditions are in which rice is grown from dry rainfed rice (which still requires at least 800 mm of rainfall) to wet and flooded conditions.

Please click on the links below to find information on the Early History of Rice:

The image below illustrates the spectrum from drier to wetter rice cultivation systems. 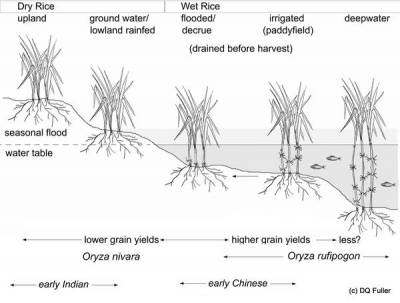 Why Flood a Rice Plant?:

How does flooding produce Methane?