The Origins and Spread of Agriculture

While the best evidence for rice origins comes from the Lower Yangtze, and has been a research focus of the Early Rice Project. This research is closely linked to the Comparative Pathways to Agriculture Project (ComPAg) also directed by Dorian Fuller is pursuing the archaeobotanical for evidence across a range of crops and world regions, with a team of post-doctoral researchers. For a recent summary of plant domestications (the map above) see Fuller et al. 2014 [PDF], and other contributions to a PNAS special feature on domestication.

Agriculture had important and long-lasting impacts on human demography and genetic variation, and profound long-term impacts on culture and the earth's environments. Agriculture facilitated a nearly global shift to more sedentary lifestyles, a massive increase in human population levels, urbanism, state formation and with it the support of specialized crafts, leading to the diversification of material technologies, including ceramics, later metals and the modern proliferation of compounds and plastics that we see today. The increased population densities of humans and livestock, clearance of forests for agriculture, and the transformation of soils means that the world we live in has become increasingly anthropogenic over the past few 1000 years (see Ellis et al 2013 "used planet"). Unlike Pleistocene hunter-gatherers, farming societies have transformed the surface of the earth, its atmospheric composition (increasing greenhouse gases), and impacted the genomes and geographies of many other species, especially domesticated ones. Understanding the origins of agriculture is thus paramount to understanding our species and its place in the global ecosystem. 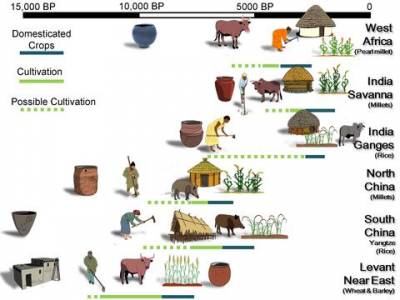 Above, a comparative timeline for the origins of agriculture and associated technologies in various parts of the Old World. Drawn by Dr. Chris Stevens as part of the ComPAg project.