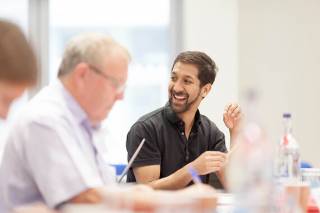 Alan Smith was awarded a PhD at Leicester University in 1978 having flown a Skylark sounding rocket from Woomera, South Australia. He worked for the European Space Agency (1984-1990) as both an astrophysicist and an instrument scientist. In 1990 he joined University College London’s Mullard Space Science Laboratory, initially as Head of Detector Physics then Director and Head of Department (2005-2017). In 1998 he was made a Professor of Detector Physics. He has also held the roles of: Director of UCL’s Centre for Advanced Instrumentation Systems (1995-2005); Co-Director of the Smart Optics Faraday Partnership (2002-2005); founding Director of the Centre for Systems Engineering (1998-2017); Vice-Dean Enterprise for the faculty of Mathematical and Physical Sciences (2007-2015). He is currently the founding director of UCL’s Space Domain. Alan is currently the UK instrument lead for the ESA exoplanet mission PLATO. He is a Fellow of the Royal Astronomical Society and of the Association of Project Management.

Find out more about Alan on:

Prior to Prof. Serge Plattard's current position as Deputy Director of the UCL Space Domain, Serge was Senior Resident Fellow at ESPI since 2012, a European space policy think tank he started and ran in 2004, working on space governance, exploration policies, and space security. From 1998-2003, he was CNES’s director for international relations. A nuclear physicist for 12 years, he then turned to science & technology diplomacy, first at the French Ministry of External relations in 1981, and later as science & technology counsellor with French Embassies in India, Japan, US and UK. He lectured in nuclear physics at Université d’Orsay, and in R&D innovation and technology economy at Université Paris-Dauphine, and the French Business School ESSEC. He also lectures at UCL and at the International Space University in Strasbourg. He is a life member of the American Physical Society, founding member of Euroscience and member of the International Academy of Astronautics. Serge is a Knight in the order of the Légion d’Honneur, and holds the Golden Rays in the order of the Sacred Treasure (Japan).

Prof Serge Plattard, Deputy Director of the UCL Space Domain, is currently involved in several activities with the International Astronautical Federation (IAF). He has been appointed on March 22, 2020 as the Secretary of the IAF Working Group on Space Traffic Management (STM). This working group, together with two others steered respectively by the International Academy of Astronautics (IAA), and the International Institute of Space Law (IISL) will present a White Paper on STM at the annual International Astronautical Congress to be held in Paris in October 2021. This White Paper will serve as a new platform to help contributing to a consensual approach on the major challenge of defining and applying common guidelines and/or regulatory processes to ensure a stable, secure, safe and sustainable space traffic.
Ideas and suggestions for input to this IAF Working group are most welcome and can be sent directly to Prof Serge Plattard until September 30, 2020.

Within IAF, Serge also holds two other positions as:

Find out more about Serge Plattard on:

Prof. Buchli is committed as an anthropologist and social scientist to foster interdisciplinary research and training in the social sciences, arts and humanities as they relate to wider Space research at UCL and facilitate the innovative and valuable synergies that will entail.  This has been his ambition as part of his earlier role as the lead on Interdisciplinary Space Studies and Research at ESAlab@UCL. He is a member of the Space Habitats Committee of the International Astronautical Federation and has worked with the International Space University in Strasbourg and is Affiliate Member of the Centre for Outer Space Studies (COSS) at the Institute of Advanced Studies at UCL

He is currently Principal Investigator of a 5 year ERC project on the ethnographic study of the International Space Station: ETHNO-ISS.  The aim of this project is to provide an interdisciplinary and multi-cultural perspective on life on the ISS and its Mission Controls across Earth and their attendant communities. The project examines issues as wide ranging as astronaut training; architecture, design and manufacturing; management and logistics; visual culture; religious life; social media and robotics across the various international space agencies contributing to the modular architecture of the ISS.

Victor can be contacted at v.buchli@ucl.ac.uk

Satellite observations enable scientists to monitor changes in remote and inhospitable parts of the world. Over the last 40 years, there has been rapid growth in the number of satellite missions around the world, with the European Space Agency (ESA) playing a key role in helping to monitor polar regions. In particular, ESA has launched satellites that help scientists monitor how sea ice thickness and ice sheet mass balance is changing.

The Institute for Materials Discovery’s interests in advanced materials for space include:

This theme explores issues around off-world living, particularly related to the Moon and Mars. While the construction of an off-world living environment poses many significant engineering and science challenges, the longer-term brings with it challenges related to bio-medicine, psychology, law, education, resilience, and independence.

This group works on a range of topics in astrodynamics, space geodesy and navigation. Primarily a modelling and algorithm development group we also have some experience in hardware development.

The Centre for Planetary Sciences at UCL/Birkbeck (CPS) is one of the UK’s leading centres for planetary and exoplanetary science. It houses expertise in understanding planets from their deep interiors, through their surfaces and atmospheres, to their space environment. This expertise is complemented by world leaders in astronomy, terrestrial and solar science, life and chemical sciences.

The scope of activity at UCL related to space science instrumentation development includes:

STEaPP research focuses on the complex policy problems emerging in the 21st century that arise from continued innovation and application of science, technology and engineering. Work explores both the legal and regulatory problems themselves and also the future of policymaking innovation and international policy cooperation.

The CSM focuses on the facilitation of human space exploration and the improvement of quality of life on Earth through open innovation and cross-disciplinary application of techniques and technology. The CSM is inherently interdisciplinary involving BioMedical, Cognitive, Robotics/Engineering, IT and Space Sciences. The CSM has excellent links across the UK Space Biomedical community, within ESA’s human space flight programme, within the Russian Space programme (including IBMP and the Gagarin Cosmonaut Training Centre (GCTC), and NASA.

UCL has focused areas of interest within the broad area of space policy, dealing with topics central for pursuing and expanding space activities at congested, contested and competitive environment. These areas include space exploration, exploitation of space resources, and space security including space surveillance and tracking, space situational awareness, and space traffic management.

MSSL has a demonstrated track record in space weather across the following areas: