This MSc aims to provide sufficient knowledge of advanced medically related anthropology to enable students to utilise anthropological approaches in a range of research and professional roles. We train students in theoretical and applied aspects of the field, preparing them for careers that engage with and impact real-world contexts.

All applicants
Open: 9 November 2020
Close: 31 May 2021
Notification
Applications may close earlier if all places on the programme are filled.


Note on fees: The tuition fees shown are for the year indicated above. Fees for subsequent years may increase or otherwise vary. Further information on fee status, fee increases and the fee schedule can be viewed on the UCL Students website: ucl.ac.uk/students/fees.

A minimum of an upper second-class Bachelor's degree in a relevant discipline from a UK university or an overseas qualification of an equivalent standard.

If your education has not been conducted in the English language, you will be expected to demonstrate evidence of an adequate level of English proficiency.

UCL Pre-Master's and Pre-sessional English courses are for international students who are aiming to study for a postgraduate degree at UCL. The courses will develop your academic English and academic skills required to succeed at postgraduate level. International Preparation Courses

Further information can be found on our English language requirements page.

Country-specific information, including details of when UCL representatives are visiting your part of the world, can be obtained from the International Students website.

International applicants can find out the equivalent qualification for their country by selecting from the list below.

Students undertake modules to the value of 180 credits.

Upon successful completion of 180 credits, you will be awarded a MSc in Medical Anthropology.

All students must take the following module:

Students must take 45 credits in total from the recommended optional modules below or modules available within the department. Out of the total, up to 15 credits can be taken from appropriate options in other departments (with approval from the programme tutor and host department).

For a complete list of modules available within the department or in other departments, please see UCL's Module Catalogue.

All MSc students undertake an independent research project which culminates in a dissertation of 15,000 words.

Fieldwork is not required, though some students choose to undertake field projects.

The programme is delivered through a combination of lectures, seminars, small-group presentations and discussion, tutorials, laboratory and practical work, independent directed reading, interactive teamwork, and video film and web based courses. Assessment is through one examination, two essays, optional module requirements and the research dissertation.

For more information on additional costs for prospective students please go to our estimated cost of essential expenditure at Accommodation and living costs.

Details of the accessibility of UCL buildings can be obtained from AccessAble accessable.co.uk. Further information can also be obtained from the UCL Student Support & Wellbeing team: ucl.ac.uk/students/fees-and-funding.

For a comprehensive list of the funding opportunities available at UCL, including funding relevant to your nationality, please visit the Scholarships and Funding website.

Medical anthropology is a rapidly expanding interdisciplinary field and graduates of our programme have gone on to develop exciting careers in academia, clinical services, social services, government, and non-governmental organisations.

All students will learn valuable skills which are transferrable to a variety of careers. These include ability to fashion arguments and critically evaluate claims related to health and illness, interventions, human social behaviour and cultural diversity. You will develop skills in research and writing, taking advantage of the wealth of resources made available at a university ranked among the top 10 in the world (QS World University Rankings 2020).

Why study this degree at UCL?

Currently ranked among the top 10 universities by the QS World University Rankings, with our Anthropology department ranked 4th in the world (making it the top ranked Anthropology department in London and the third in the UK and Europe), UCL is very international in orientation. This makes for a diverse and interesting cohort. Our excellent results in the Research Excellence Framework 2014 also identify us as a leading Anthropology department in the UK, offering an exceptional breadth of expertise. The MSc has a flexible structure, allowing students to create their own path and explore topics of interest to them.

University College London was established in 1826 as an alternative to Oxford and Cambridge, becoming the first university in England to admit students of any race, class or religion. UCL was also the first university to welcome female students on equal terms with men. Students are encouraged to take full advantage of the wider anthropological community in London and the department's strong links with European universities and international institutions.

Students are advised to apply as early as possible due to competition for places. Those applying for scholarship funding (particularly overseas applicants) should take note of application deadlines.

This programme requires two references. Further information regarding references can be found in our How to apply section.

There is an application processing fee for this programme of £90 for online applications and £115 for paper applications. Further information can be found at: ucl.ac.uk/prospective-students/graduate/taught/application.

The programme is aimed at candidates who wish to gain the appropriate social science training in preparation for a PhD and for medical professionals who want to employ anthropological techniques in their professional work. We recruit a mix of clinicians and social scientists, finding that the interaction between these student groups helps create mindful practitioners.

What are we looking for?

When we assess your application we would like to learn:

Together with essential academic requirements, the personal statement is your opportunity to illustrate whether your reasons for applying to this programme match what the programme will deliver.

UCL is regulated by the Office for Students.

This MSc aims to provide sufficient knowledge of advanced medically related anthropology to enable students to utilise anthropological approaches in a range of research and professional roles. We train students in theoretical and applied aspects of... 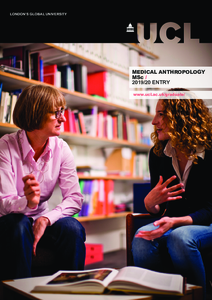