Tracking records of the oldest life forms on Earth

Ancient organic matter of biological origin has been tracked in multiple samples of rock spanning over 2,000 million years of Earth’s history, according to UCL researchers Dr Dominic Papineau and Dr Matthew Dodd, who are members of the UCL/Birkbeck Centre for Planetary Sciences. 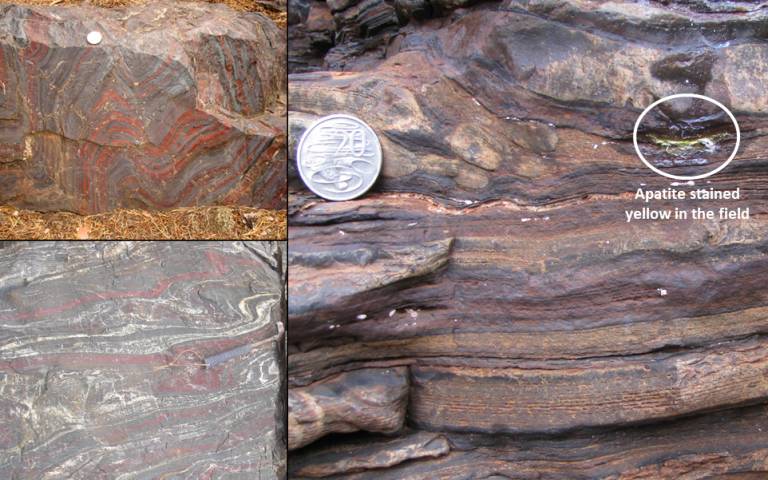 The discovery provides a new characteristic ‘biosignature’ to track the remains of ancient life preserved in rocks which are significantly altered over billions of years and could help identify life elsewhere in the Solar System.

The research, published in two papers – one in the Journal of the Geological Society and another in Earth and Planetary Science Letters – solves the longstanding problem of how scientists can track records of life on Earth in highly metamorphosed rocks more than 3,700 million years old, with organic material often turning into the carbon-based mineral graphite.

They argue that carbon preserved in graphite-like crystals –‘graphitic carbon’– located alongside minerals such as apatite, which our teeth and bones are made of, and carbonate, are the biosignatures of the oldest life forms on Earth.

“Life on Earth is all carbon-based and over time, it decomposes into different substances, such as carbonate, apatite and oil. These become trapped in layers of sedimentary rock and eventually the oil becomes graphite during subsequent metamorphism in the crust,” explained Dr Dominic Papineau (UCL Earth Sciences, Centre for Planetary Sciences at UCL/Birkbeck and the London Centre for Nanotechnology).

“Our discovery is important as it is hotly debated whether the association of graphite with apatite is indicative of a biological origin of the carbon found in ancient rocks. We now have multiple strands of evidence that these mineral associations are biological in banded iron formations. This has huge implications for how we determine the origin of carbon in samples of extra-terrestrial rocks returned from elsewhere in the Solar System.”

“Previously, it was assumed that finding apatite and graphite together in ancient rocks was a rare occurrence but this study shows that it is commonplace in BIF across a range of rock metamorphic grades,” said team member Dr Matthew Dodd (UCL Earth Sciences, Centre for Planetary Sciences at UCL/Birkbeck and the London Centre for Nanotechnology).

The apatite and graphite minerals are thought to have two possible origins: mineralised products of decayed biological organic matter, which includes the breakdown of molecules in oil at high temperatures, or formation through non-biological reactions which are relevant to the chemistry of how life arose from non-living matter.

By showing evidence for the widespread occurrence of graphitic carbon in apatite and carbonate in BIF along with its carbon-isotope composition, the researchers conclude that the minerals are most consistent with a biological origin from the remains of Earth’s oldest life forms.

To investigate the extent to which high-temperature metamorphism causes a loss in molecular, elemental and isotope signatures from biological matter in rocks, they analysed the same minerals from a 1,850 million year old BIF rock in Michigan which had metamorphosed in 550 degree Celsius heat. In this second study, published today in Journal of the Geological Society, the team show that several biosignatures are found in the graphitic carbon and the associated apatite, carbonate and clays.

They used a variety of high-tech instruments to detect traces of key molecules, elements, and carbon isotopes of graphite and combined this with several microscopy techniques to study tiny objects trapped in rocks which are invisible to the naked eye.

Together, all of their observations of the composition are consistent with an origin from decayed biomass, such as that of ancient animal fossils in museums, but which has been strongly altered by high temperatures.

“Our new data provide additional lines of evidence that graphite associated with apatite in BIF is most likely biological in origin. Moreover, by taking a range of observations from throughout the geological record, we resolve a long-standing controversy regarding the origin of isotopically light graphitic carbon with apatite in the oldest BIF,” said Dr Papineau.

“We’ve shown that biosignatures exist in highly metamorphosed iron formations from Greenland and northeastern Canada which are more than 3,850 million years old and date from the beginning of the sedimentary rock record.”

The work was kindly funded in part by NASA.