A ‘deep learning’ approach to detecting storms on Saturn is set to transform our understanding of planetary atmospheres, according to UCL and University of Arizona researchers. The new technique, called PlanetNet, identifies and maps the components and features in turbulent regions of Saturn’s atmosphere, giving insights into the processes that drive them.

A study, published today in Nature Astronomy, provides results from the first demonstration of the PlanetNet algorithm, which clearly shows the vast regions affected by storms, and that dark storm clouds contain material swept up from the lower atmosphere by strong vertical winds.

Developed by UCL and the University of Arizona researchers, PlanetNet was trained and tested using infrared data from the Visible and Infrared Mapping Spectrometer (VIMS) instrument on Cassini, a joint mission between NASA, the European Space Agency, and the Italian Space Agency.

A dataset containing multiple, adjacent storms observed at Saturn in February 2008 was chosen to provide a range of complex atmospheric features to challenge PlanetNet’s capabilities. 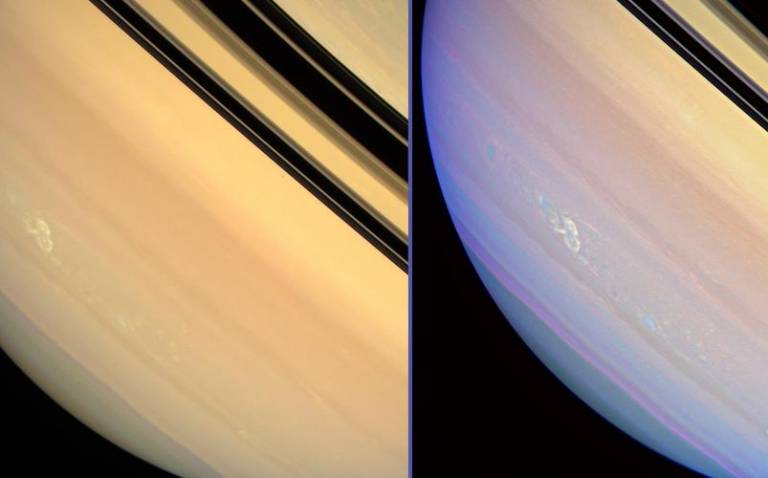 Previous analysis of the dataset indicated a rare detection of ammonia in Saturn’s atmosphere, in the form of an S-shaped cloud.

The map produced through PlanetNet shows that this feature is a prominent part of a much larger upwelling of ammonia ice clouds around a central dark storm. PlanetNet identifies similar upwelling around another small storm, suggesting that such features are quite common.

The map also shows pronounced differences between the centre of storms and the surrounding areas, indicating that the eye gives a clear view into the warmer, deep atmosphere.

“Missions like Cassini gather enormous amounts of data but classical techniques for analysis have drawbacks, either in the accuracy of information that can be extracted or in the time they take to perform. Deep learning enables pattern recognition across diverse, multiple data sets,” said Dr Ingo Waldmann (UCL Physics & Astronomy and the Centre for Planetary Sciences at UCL/Birkbeck), lead author and Deputy Director of the UCL Centre for Space and Exoplanet Data.

“This gives us the potential to analyse atmospheric phenomena over large areas and from different viewing angles, and to make new associations between the shape of features and the chemical and physical properties that create them.”

Initially, PlanetNet searches the data for signs of clustering in the cloud structure and gas composition. For areas of interest, it trims the data to remove uncertainties at the edges and runs a parallel analysis of the spectral and spatial properties. Recombining the two data-streams, PlanetNet creates a map that presents quickly and accurately the major components of Saturn’s storms with unprecedented precision.

PlanetNet’s accuracy has been validated on Cassini data not included in the training phase. The whole dataset has also been rotated and resampled to create ‘synthetic’ data for further testing. PlanetNet has achieved over 90% classification accuracy in both test cases.

“PlanetNet enables us to analyse much bigger volumes of data, and this gives insights into the large-scale dynamics of Saturn,” said Professor Caitlin Griffith (University of Arizona), who co-authored this paper. “The results reveal atmospheric features that were previously undetected. PlanetNet can easily be adapted to other datasets and planets, making it an invaluable potential tool for many future missions.”

This project received funding from the European Research Council (ERC), the Science and Technology Funding Council (STFC) and the University of Arizona.