A new UCL laboratory with a unique capacity to explore how people interact with their environments has been granted planning permission by Barking and Dagenham Council. 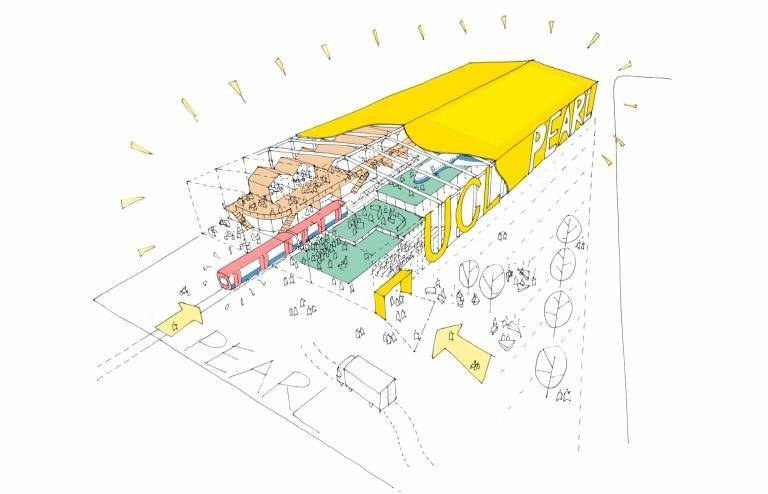 To be completed in 2021, PEARL (Person-Environment-Activity Research Laboratory), part of UCL Civil, Environmental & Geomatic Engineering’s (CEGE) Centre for Transport Studies (CTS), will be the only space in the world where researchers can precisely simulate large-scale environments such as train stations or town centres and test people’s reactions to them in detail.

The space, which will be UCL’s first net zero carbon building, aims to improve quality of life through better infrastructure design but will also facilitate research in a wide range of areas – from medical and brain sciences to smart data, public health and the performing arts.

The facility, located near Dagenham East tube station, will be one of the core laboratories in the UK government’s EPSRC-funded UK Collaboratorium for Research on Infrastructure and Cities (UKCRIC).

Professor Nick Tyler, Director of UCL CTS, said: “PEARL’s vision is to create a better world through designing infrastructure that works for everyone, but also by facilitating research and education across a wide range of areas, including the arts, humanities and medical sciences, as well as planning, design and engineering.”

The Leader of Barking and Dagenham Council, Councillor Darren Rodwell, said:  “We’re excited to be working with UCL on this ground-breaking research laboratory. The PEARL facility – along with the wider Londoneast site – will contribute to Dagenham’s growing recognition as a centre for media, data and engineering.”

PEARL will build on the work of PAMELA (UCL Pedestrian Accessibility Movement Environment Laboratory) which has informed the design of proposed new London Underground trains and identified ways of improving infrastructure for people with dementia.

At 14 metres tall and with 600 square metres of reconfigurable floor space, PEARL will have a sophisticated capacity to simulate scenarios, recreating smells such as gas leaks and sounds ranging from the tiniest bird song to massive explosions. Several decommissioned London Underground trains will form part of the site.

Professor Nigel Titchener-Hooker, Dean of UCL Engineering, said: “PEARL is a once-in-a-generation opportunity. This new facility shows the power of engineering in delivering the full range of UCL’s capabilities in education and research.”

Professor Stella Bruzzi, Dean of UCL Arts & Humanities, said PEARL opened up a wide range of possibilities as a performance space. “PEARL, like PAMELA, could be used as a basic black box backdrop: a film or performance set which we could configure as required, to create a multisensorial amphitheatre for Greek plays, a 16th century theatre, or an open square for public performance.”

PEARL will be delivered by UCL Estates as part of Transforming UCL, a £1.25 billion ten-year programme of investment in UCL’s estate and in partnership with the UK Government who are providing a £9 million grant through UKCRIC.

Professor William Powrie, Convenor of UKCRIC, said: "We see PEARL as the chief, if not the only, UKCRIC facility focusing on infrastructure/human interactions and, as the only facility delivering multiscalar analysis of these interactions, it is crucial to the UKCRIC mission.”

Along with the new PEARL facility, UCL has a number of major developments planned including UCL East and a new facility for UCL Neuroscience in Kings Cross.

Francesca Fryer, Director of UCL Estates, said: “We are building outstanding educational spaces that reflect the innovation and ambition of UCL’s unique multi-disciplinary approach to learning, research and real world problem-solving and we are committed to doing this sustainably. In 2019 our award-winning 1,000-seat Student Centre became one of the sector’s first BREEAM Outstanding buildings. I am delighted that we start 2020 with PEARL set to become UCL’s first net zero carbon building.”

Tony Barry, Chief Executive of the BD Group, the trading arm of Barking and Dagenham Council which owns the Londoneast site, said: “We are absolutely delighted that Londoneast will be home to this pioneering feat in engineering research. Dagenham is fast gaining a reputation as a scientific hub and this announcement is a further boost for local people and the local economy.”