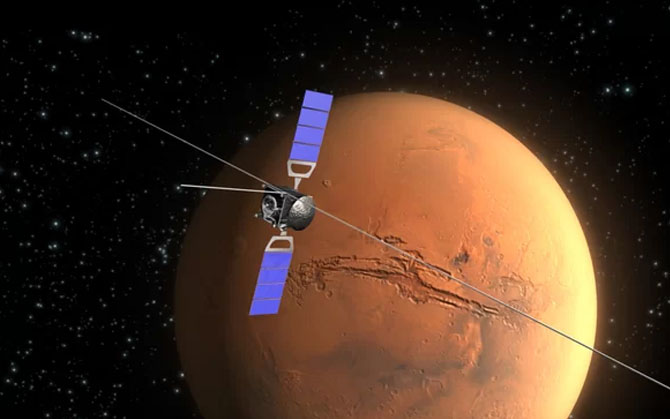 Mars Express is the first "flexible" mission from the European Space Agency, comprising the Mars Express orbiter and the Beagle 2 lander. Mars Express launched on 2 June 2003 at 18:45 BST on a Soyuz-Fregat launch vehicle and arrived in orbit around Mars on 25 December 2003. Many of the instrument designs were based on instruments the European community built for the failed Russian Mars 96 mission.

One of the major differences between Mars and the Earth is that Mars lost its magnetic field early in the planet's history, leaving it unmagnetised except in a few small areas of the crust. Now, and for the past 3 billion years, the atmosphere and ionosphere of Mars can be "scavenged" directly by the solar wind. This atmospheric loss process cannot happen at Earth. Scavenging starts in the same way that the solar wind interacts with comets and it ends with the loss of atmosphere along the planet's tail. The atmospheric pressure at the Mars surface is now only 1% of that at Earth.

The scientific objectives for Mars Express are:

The vital ingredient for life is water. We know that water is being replenished into the martian atmosphere from somewhere below the surface, only to be lost by solar wind scavenging. The Aspera-3 instrument on the Mars Express orbiter will measure the loss of water and study scavenging in detail. The water loss can then be estimated over billions of years, giving clues about conditions for past life on the planet.

Mars Express orbiter is a cube-shaped platform whose design was also used for Rosetta and Venus Express. It measures 1.5x1.8x1.4 m and has solar panels arranged like wings spanning 12 m tip-to-tip. It weighed 1123 kg at launch of which 457 kg was fuel. The Beagle 2 lander is described on our Beagle 2 pages.

The Mars Express orbiter carries a full suite of instruments: