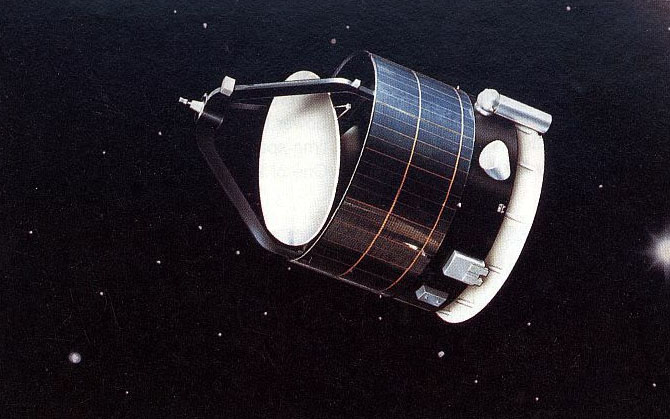 Giotto was the European Space Agency's first interplanetary mission, and was part of the international armada of spacecraft which made flybys of Comet P/Halley in 1986. Following its encounter with Halley, the spacecraft was put into hibernation. It was reawoken to make a close approach of Earth in 1990, which enabled it to make a flyby of Comet Grigg-Skjellerup in July 1992.

Giotto was approved by ESA in 1980 and was launched on an Ariane 1 launch vehicle on 2 July 1985 from Kourou. Giotto successfully made its closest approach of 596 km to Halley on 14 March 1986. The spacecraft survived despite being hit by small particles. One impact destabilised the spacecraft (which was corrected by the spacecraft itself) and another destroyed the Halley Multicolour Camera, but thankfully the camera failed only after taking spectacular images of the nucleus of the comet. Giotto was set on a trajectory back to Earth and the spacecraft was put into hibernation. The spacecraft was reawoken for the Earth swingby and used a slingshot to send it onto comet Comet Grigg-Skjellerup. It made its closest approach of 200 km to Grigg-Skjellerup on 10 July 1992. Giotto was then switched off again. 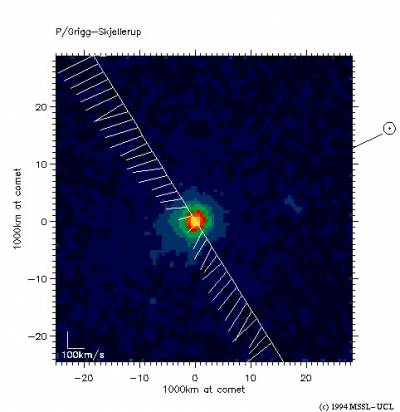 The above image is a representation of Giotto passing through the Comet Grigg-Skjellerup. Solar wind vectors as measured by the JPA instrument are overlaid, projected onto the sky plane. Giotto was moving from upper-left to lower-right. The along-track distance between the solar wind vectors is 1790km. The image was obtained at the Anglo-Australian Telescope by Prof. Keith Mason approximately seven hours before the encounter took place.

The Johnstone Plasma Analyser (JPA) aboard the Giotto spacecraft consisted of an Implanted Ion Sensor (IIS), Fast Ion Sensor (FIS) and Common Digital Processing Unit (DPU). They were designed to cover the solar wind and cometary ions during the Halley encounter. The FIS was damaged during that encounter, and was thus not operating when the spacecraft flew by Grigg-Skjellerup. The instrument development was headed by the Space Plasma Physics Group of the Mullard Space Science Laboratory. Collaborators on the project were from The Max-Planck-Institut fuer Aeronomie (Germany), Istituto di Fisica dello Spazio Interplanetario (Italy), Kiruna Geophysical Institute (Sweden), Southwest Research Intitute (USA) and the Rutherford-Appleton Laboratory (UK).

The Fast Ion Sensor provided 3D positive ion distribution every 4 seconds in the energy range 10eV to 20 keV. This instrument was damaged during the Halley flyby, and was not operational during the Grigg-Skjellerup encounter.

The Implanted Ion Sensor covered cometary pickup ions in 32 energy levels from 86 eV to 86 keV, with a time resolution of 128 seconds (at Grigg-Skjellerup this provided a 1790km along-track resolution). The instrument had a very high sensitivity, to detect the low fluxes of cometary ions.

As its name suggests, the IIS is an ion spectrometer whose primary function was to investigate cometary ions implanted in the solar wind flow. Five sensors in the IIS covered the angular range of 15degrees to 165degrees in five equally-spaced 10degree sectors in a plane including the spacecraft spin axis. As the spacecraft rotated, three-dimensional coverage was provided of the ion populations. Each of the five sensors consisted of a spherical-section electrostatic segment analyser (ESA), and a time-of-flight (TOF) analyser.

The mean radius of the ESA sectors is 50mm, their plate spacing is 3mm, and the energy bandwidth deltaE/E = 10%. The outer plate was held at 0V, and up to -11kV could be applied to the inner plate. Positive ions were selected in the ESA according to their E/q. Following selection, the ions were accelerated by 10kV to pass through a thin carbon foil at the entrance of the TOF analyser. While passing through the foil, a small amount of energy was tranferred to secondary electrons that were deflected from the foil onto an MCP to record the `start' signal. The `stop' detector was an aluminium absorber which released secondary electrons from its surface layer. The error in flight-path length caused by coulomb angular scattering of the ions with atoms in the `start' foil was limited to ~5% by using a spherical concave shape for the `stop' detector.

The response of the incident ions to a given accelerating potential depends on q/mass and therefore the selected E/q and the measured time of flight (after acceleration) over a known path length are combined to give m/q. Counts are sorted into 5 mass bins using an on-board look-up table. Further pulses cannot be processed during the 25 microseconds required to process the signals for each event. The maximum time interval allowed between start and stop signals in 80ns (after which the event is discounted). Using this coincidence technique, a high rejection of background signals was given, allowing the relibale measurement of low densities.

During each spacecraft spin, an entire angular distribution was obtained by the instrument in one of the 32 logarithmically-spaced energy levels, from 86 eV/q to 86 keV/q. As the spacecraft rotated every 8 seconds, the entire energy range was covered by the IIS in 128 seconds.