A new method for detecting tsunamis using existing GPS satellites orbiting Earth could serve as an effective warning system for countries worldwide, according to a new study by an international team led by UCL researchers. 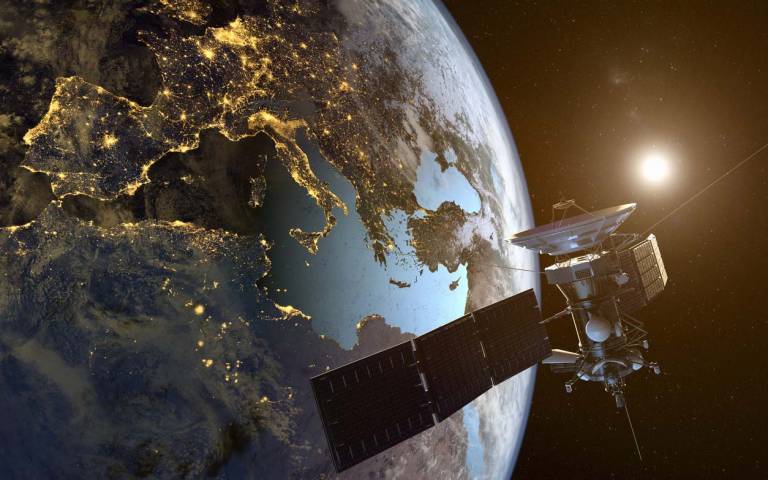 Initial tsunami waves are typically a few centimetres high but nonetheless cause a disturbance in the Earth’s upper atmosphere by pushing up air and creating an acoustic wave that is amplified as it goes higher.

This leads to a change in the ionosphere, 300km above the surface of the Earth, in which the density of electrons in the area is reduced. This in turn affects radio signals sent by GPS satellites to GPS receivers on the ground, delaying or speeding up different parts of the signal, or changing the signal’s direction, depending on frequency.

For the new study, published in Natural Hazards and Earth System Sciences, researchers from UCL and universities in Japan developed a new way to detect this dip in electron density from the altered GPS signals.

Looking at GPS data at the time of the devastating 2011 Tohoku-Oki earthquake and tsunami, they found that a tsunami warning could have been issued with confidence within 15 minutes of the earthquake occurring – that is, at least 10 minutes prior to the first tsunami hitting Japan’s east coast.

They also found that a warning could have been issued using data from only 5% of Japan’s 1,200 GPS receivers – meaning that the method could be used in countries with a sparser GPS network than Japan’s.

Professor Serge Guillas (UCL Statistical Science and the Alan Turing Institute), senior author of the paper, said: “Current tsunami warning systems are not as effective as they should be as they often cannot accurately predict the height of a tsunami wave. In 2011, Japan’s warning system underestimated the wave’s height. A better warning may have saved lives and reduced the widespread destruction that occurred, allowing people to get to higher ground and further away from the sea.

“Our study, a joint effort by statisticians and space scientists, demonstrates a new method of detecting tsunamis that is low-cost, as it relies on existing GPS networks, and could be implemented worldwide, complementing other ways of detecting tsunamis and improving the accuracy of warning systems.”

Lead author and PhD researcher Ryuichi Kanai (UCL Statistical Science and the Alan Turing Institute) said: “Our calculations suggest the size and shape of the wave could be inferred from the disturbance in the ionosphere and so the next step in the research will be to investigate this further to see if the method could be used for more precise predictions of tsunami size and range.

"From my experience of working for the Japanese government in the past and seeing the damage caused by the tsunami, I believe that if this research comes to fruition, it will surely contribute to saving lives.”

The researchers used statistical techniques to reconstruct the depression in electron density in the atmosphere based on scattered points provided by GPS data, as well as to quantify the uncertainty inherent in the modelling.

The acoustic wave caused by the initial rise in water took about seven minutes to reach 300km high in the ionosphere and the depression in electron density that occurs as a consequence could be detected via satellite signals in 10 to 15 minutes, the researchers found.

Tsunami waves are low in deep water but can travel at the speed of a jet (up to 800km an hour in a deep sea) and as they enter shallower waters, they slow down, growing in height.

Many existing tsunami warning systems infer tsunami waves from earthquakes, but this proposed method could be used to predict incoming tsunamis with non-earthquake sources, such as landslides and volcanic eruptions.

While some tsunamis reach coasts in under 10 minutes, the researchers pointed out that the method could also be used to predict second or third waves, helping to determine whether a tsunami warning should be cancelled or maintained after the first wave.

The ionosphere stretches from 48 km to 965 km above the Earth’s surface (where the Earth’s atmosphere meets space). Heat from the Sun cooks the gases until they lose electrons (i.e. they become ionised), creating a sea of charged particles that includes an abundance of free electrons.

The study was carried out by researchers at UCL Statistical Science, UCL Mullard Space Science Laboratory, the Alan Turing Institute, Tokai University and the University of Shizuoka, Japan. It was supported by Japan’s Ministry of Education, Culture, Sports, Science and Technology (MEXT), the Earthquake Research Institute at the University of Tokyo, the UK’s Engineering and Physical Sciences Research Council (EPSRC), and the Japan Science and Technology Agency (JST). 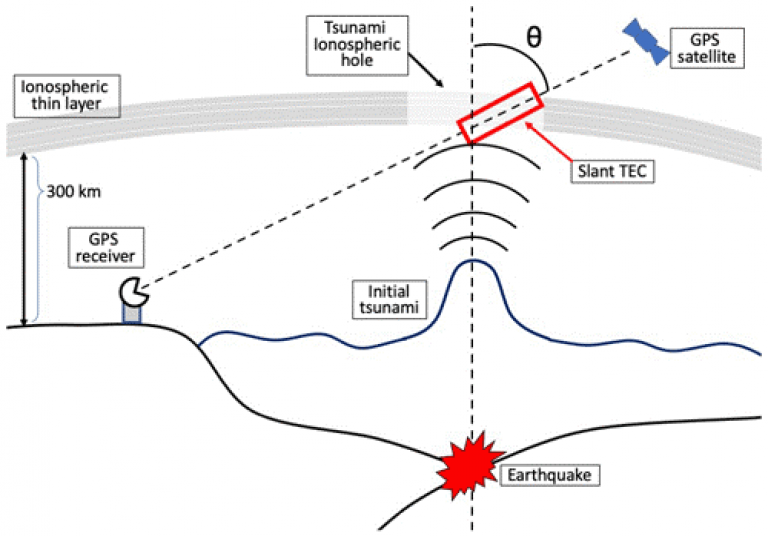