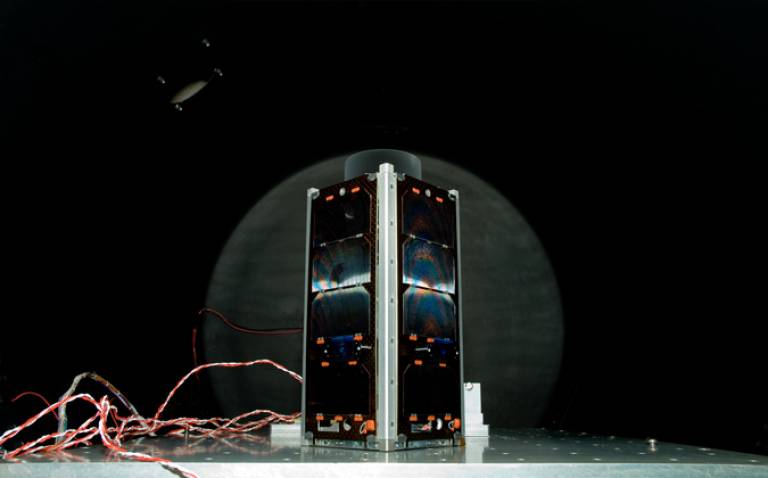 Originally conceived by the European Space Agency’s Dr Ruedeger Reinhard, QB50 is a European Union-funded mission to support universities and schools from all over the world in designing, building and launching their own small, affordable satellites called CubeSats to collectively study the physics and chemistry of the middle and lower thermosphere of Earth for the first time.

“It’s a really exciting mission from a scientific and engineering perspective, but it is also a fantastic opportunity for widening participation in space missions and making satellite technology affordable for developing countries. We hope it will inspire children globally to pursue a career in space science and engineering, and we hope people enjoy engaging with QB50 by tracking CubeSats orbiting overhead using radio receivers,” said UCL project manager, Dr Robert Wicks (UCL Institute for Risk & Disaster Reduction).

Professor Alan Smith, Director of UCL MSSL, said: “We made a strategic decision to invest in CubeSat technologies so that we might use them for front-line scientific research. With QB50, CubeSats come of age scientifically. Moreover, much about QB50 is innovative, including its payloads and its approach to development and operations, and UCL has been at the front of this innovation.”

In total, 36 CubeSats are being launched – eight directly from the Polar Satellite Launch Vehicle rocket launched today join the 28 that were released from the International Space Station in May. After launch, the CubeSats will disperse around Earth at a height of 375 – 500 km. They will be in orbit from between six months to two years while they run experiments before eventually falling back to Earth and burning up on entry.

“Scientifically this is a unique experiment. For the first time we will have several months of simultaneous measurements of the thermosphere from many locations. We hope for detailed investigations of how solar flares and the solar wind influence the dynamics and chemistry of the upper atmosphere, and the risk to satellites and technology”, explained Dr Anasuya Aruliah (UCL Astrophysics) who will be analysing the data collected from UCLSat.

Until now, Earth’s thermosphere has only been studied in situ for minutes at a time using rockets. This is because the thermosphere is too near to the surface to send expensive satellites that would get pulled down by drag within six months, and it is too high for balloons and planes.

Dhiren Kataria (UCL MSSL), project lead responsible for the development and procurement of the scientific instruments for the mission, said: “Low resource miniaturised sensor systems are key to successful exploitation of CubeSats for science. We’ve successfully developed our instruments to fit within a fraction of the CubeSat volume but still have significantly advanced capabilities.”

“To ensure UCLSat survives its journey to the thermosphere and operates once in orbit, we used specialist equipment on site at UCL MSSL to bake it, freeze it, shake it and shock it. This is an incredibly important step and we’re pleased to say it passed all the tests before launch and we hope it remains operational for a number of years. Each CubeSat in the mission is slightly different and we’re keen to see how they perform as it will help inform future satellite design,” concluded Theophile Brochant de Villiers, Assembly, Integration and Test) Engineer on UCLSat (UCL MSSL).

UCL was founded in 1826. We were the first English university established after Oxford and Cambridge, the first to open up university education to those previously excluded from it, and the first to provide systematic teaching of law, architecture and medicine. We are among the world's top universities, as reflected by performance in a range of international rankings and tables. UCL currently has over 38,000 students from 150 countries and over 12,000 staff. Our annual income is more than £1 billion.