Giotto at Halley: 30 years ago! 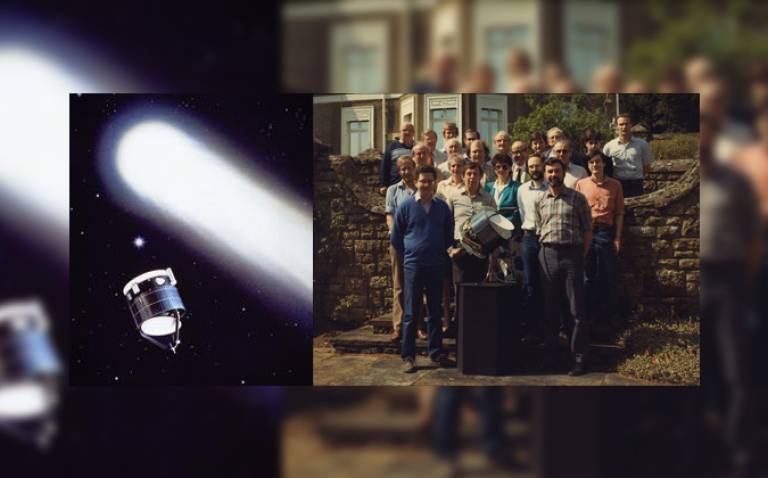 It was the year of the tragic Challenger disaster – but UCL-MSSL was making good news in space and making history too. The Giotto spacecraft carried 10 instruments, including one led by UCL-MSSL just 596 km (MSSL to ESOC distance!) from comet Halley on the night of 13th/14th March, with some spectacular results.

Giotto was ESA’s first solo interplanetary space mission, launched in 1985 on the penultimate Ariane 1 rocket. In many ways ESA itself can be thought of as ‘coming of age’ with this first bold step on its own out of Earth orbit. To date, Giotto collected the most complete set of data we have from a comet prior to Rosetta - the famous comet Halley.

13-14 March 1986 was called the ‘night of the comet’. The MSSL team at ESA’s ESOC facility in Darmstadt included Alan Johnstone (PI of the Johnstone Plasma Analyser), Andrew Coates (Experiment Manager), John Raymont (operations support), Rob Gowen (software support). Len Culhane was also present as a supporting VIP. Many people at MSSL had contributed to the success of our instrument. Notable among these were John Coker, Fred Little, Steve Kellock, Jim Bowles, Peter Sheather, Joe Ootes, and many others. The instrument consisted of 3 units – the Fast Ion Sensor (MSSL), the Implanted Ion Sensor (MPS Lindau) and the Data Processing unit (IFSI-CNR, Rome).

Also at ESOC were many other scientists on our international team, from MPAe (now MPS), Germany, IFSI-CNR (Italy), Kiruna Geophysical Institute (now IRF), Sweden, SwRI, USA and RAL, as well as team members from the other experiments. An additional floor had been built on the ESOC main building to house them all. The world’s media trucks and cameras were assembled, the marquees were up, the champagne was on ice. The stage was set for an historic encounter.

Comets are ancient members of our solar system, the building blocks of the outer planets’ cores. They are little changed since the beginning of the solar system 4.6 billion years ago. Most comets are now in two ‘storage’ regions, the Oort Cloud and the Kuiper Belt. Every now and then, one of their orbits is disturbed and a comet enters the inner solar system, orbiting the Sun. Halley came from the Oort cloud. When it nears the Sun, volatile material, mainly water, sublimes away from the comet’s nucleus and becomes ionized by sunlight. This slows the solar wind flow and produces the comet’s plasma tail. This was the process we were studying in action – a process we now know is also at work in the loss of atmospheric material from Mars, Venus. Titan, Enceladus and probably Pluto. 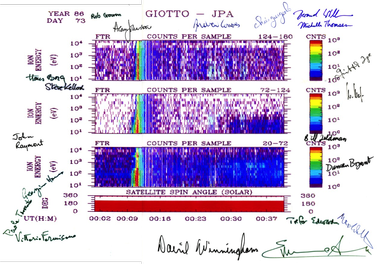 During the day on 13th the excitement was tangible. We first reported cometary ions at 9am, before any other instrument detected the comet (later analysis shows ions earlier than this from JPA and EPA). The amount increased through the day; during the afternoon the solar wind visibly slowed, eventually at 19:22 we detected the bow shock. And the automatic software to follow the rapidly changing solar wind (UK specified, Italian built) worked well! Closest approach was just after midnight on the 14th (3 minutes after on board, 11 minutes after on the ground due to light travel time). As time went on we saw increasing cometary ions, further unexpected and mysterious boundaries. Then a quiet period before finally a burst of particles as we entered the magnetic cavity – long expected, but Giotto is still the only spacecraft to have seen this.

Then loss of the signal temporarily, periodically being detected and analysed then lost again, and we realized that Giotto was wobbling on its spin axis after a dust impact. This had been expected and on-board nutation dampers reduced this in the following hours. But JPA had survived and we were still seeing data! Some damage had occurred to JPA and changes of state – John Raymont and I frantically worked out which commands (in hexadecimal) to send via the ESOC team – they still say how polite we were asking for these over the voice loops at such a hectic time for the spacecraft - while other team members talked to Patrick Moore, swigged champagne and looked in awe at the data. We were at the heart of discovery – our champagne came later. The pictures on the night reportedly disappointed Prime Minister Margaret Thatcher – but she still wrote a congratulatory letter and invited Alan to no. 10 later to find out what it was all about.

Along with several other instruments, JPA survived what Halley threw at it at a relative speed of 68.4 km/s and we received good results on the outbound leg. Giotto also encountered a much weaker comet, Grigg-Skjellerup, in July 1992 – a factor 100 weaker but with some exciting results to compare.

Overall, Giotto found many unexpected features. It was the first time a cometary nucleus was seen – but unexpectedly it was dark as coal, and the activity was confined to well-defined jets. Giotto proved that comets really are ancient members of the solar system. The number of known ‘parent’ gas molecules increased from 11 to 38 that night, and heavy hydrocarbons were seen. Thanks to JPA and the other plasma instruments, we now know more of how cometary plasma tails form. It took over a decade to fully analyse our results. But the onset and evolution of activity with distance from the Sun was left to be measured by Rosetta at 67P in 2014-2016.

It was a privilege to be there on the night of the comet, and 30 years later Rosetta is revolutionizing our ideas of comets again. The 50th ESLAB symposium in Leiden this week will allow comparison between Giotto and Rosetta as well as presenting the current state of the art in cometary science. Again, MSSL will be well represented, with presentations from Geraint Jones (showing serendipitous tail findings from Ulysses), Oliver Price (analyzing dust tails) and me (comparing Giotto and Rosetta plasma data). It will also be great to toast Giotto at a 30th anniversary celebration dinner at ESTEC – and to celebrate absent friends.