In a new paper, Andrew Coates and colleagues look at the early pickup process at 67P using data from the Rosetta Plasma Consortium (RPC) particle instruments. 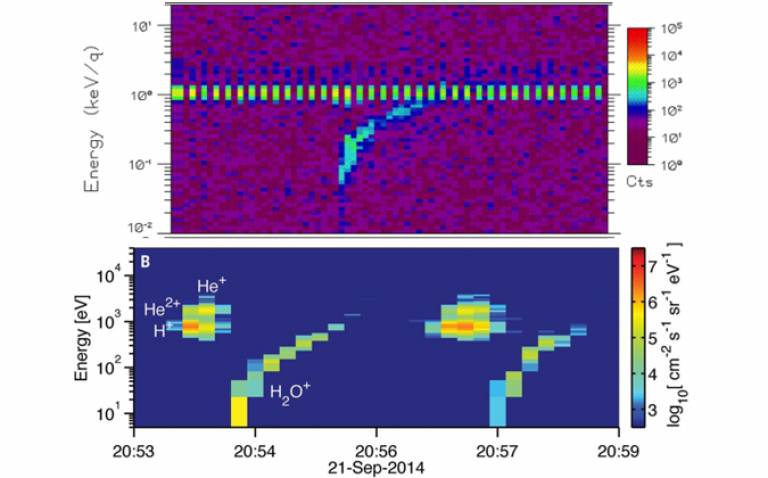 As a comet nears the Sun, its icy nucleus heats, and neutral water and other gas molecules sublime, carrying ice and dust grains away also. The gas ionizes in sunlight, producing pickup ions. In a new paper, Andrew Coates and colleagues look at the early pickup process at 67P using data from the Rosetta Plasma Consortium (RPC) particle instruments. They compare the results to what was learned with the AMPTE and Giotto missions 30 years ago. The trajectory of Rosetta, the first spacecraft to fly with a comet at different distances to the Sun, is ideal for this. They discuss an elegant momentum balance seen between the new-born pickup ions and the solar wind.

Rosetta’s unique trajectory allows exciting measurements of the development of cometary activity between ~3.6 and 1.2 AU for the first time. For a few months following Rosetta’s arrival at comet 67P in August 2014, the data that the low activity cometary environment was initially dominated by the solar wind, as expected early stages in the mission. In addition to the solar wind and related He+ populations, a low energy pickup ion population is seen intermittently near the comet. At times this reaches higher energy, approaching the solar wind energy. During these intervals, Ion Composition Analyser (ICA) data indicate that the composition is mainly water group ions. The rising energy signatures of these ions observed at times indicate that they are in the early phases of the pickup process, initially accelerated by the electric field (‘early phase pickup’).

The new paper compares these exciting pickup ion measurements with Giotto measurements at the relatively weak (compared to Halley) comet Grigg-Skjellerup, where early phase pickup was seen including non-gyrotropic cometary ions, and with the AMPTE lithium and barium releases. The results reveal some striking similarities with the AMPTE releases, particularly rising energy signatures related to early pickup, and a momentum balance between the pickup ions and the deflected solar wind. They discuss the effects of increasing activity observed between 3.6 to 1.8 AU, including the increasing dominance and energisation of pickup ions, increasing ionospheric effects and the decreasing effect of the solar wind.