Venus is slowly losing its atmosphere

New papers on ionospheric photoelectrons in the tail of Venus published in Planetary and Space Science, led by UCL-MSSL scientists. Showing Venus is losing 300kg of its atmosphere per day. 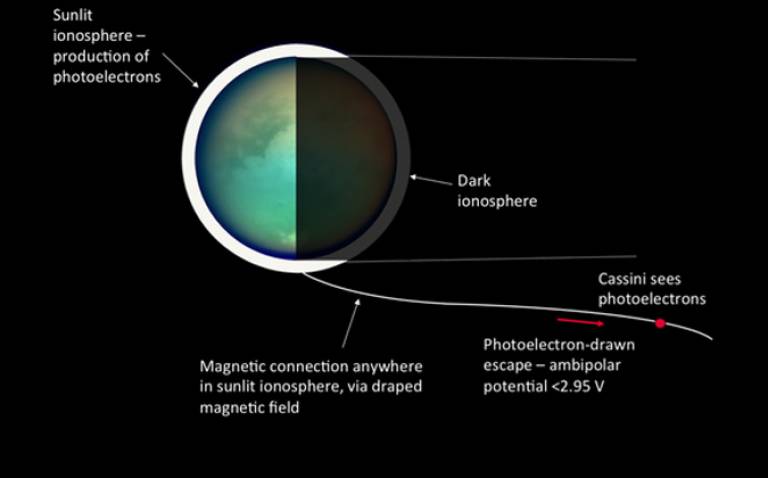 The photoelectrons, measured by the ASPERA-4 electron spectrometer (ELS) on ESA's Venus Express spacecraft, have a characteristic energy spectrum associated with the spectrum of the solar photons which produce them. The sunlight has a peak in the extreme ultraviolet at 30.4 nm, due to a particular transition in solar helium. This process produces characteristic peaks of photoelectron flux at energies seen in the 20-30 eV range - a 'fingerprint' for photoelectrons in the Venus ionosphere. Such processes have also been seen at Titan and Mars, and the relatively energetic photoelectrons, which can move along the magnetic field easily, can set up an 'ambipolar' electric field which pulls ions out of the ionosphere, enhancing ion and atmospheric escape. The new papers examine this process in action at Venus for the first time.

In the first paper, led by former student Sharon Tsang, the first observations of ionospheric photoelectron peaks are found in the Venus tail. At times the peaks are broadened in energy, implying that some scattering has occurred between the production point (in the sunlit ionosphere) and the observation point at Venus Express (in the tail), perhaps due to waves in the plasma. The results indicate that a magnetic connection exists between the observation point and the dayside ionosphere via magnetic field draped around Venus. Simultaneous observations of escaping ions support the idea of an ambipolar electric field pulling out the ions. 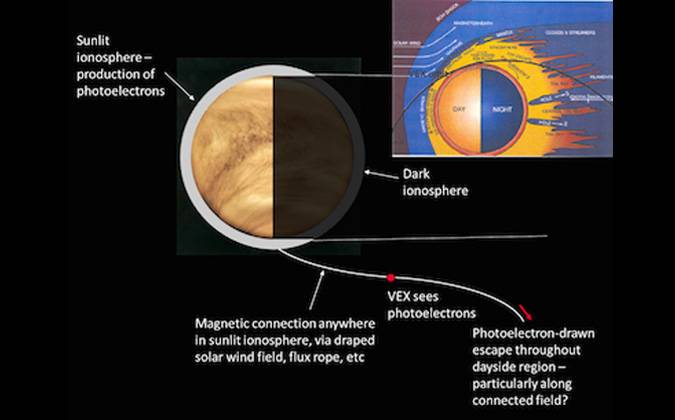 In the second paper, led by Prof Andrew Coates, photoelectron peaks are found in more examples in the Venus tail, even where sunlight is completely absent. This implies that particles move to the observation point, which can be as much as 2.3 Venus radii from the planet, again along draped magnetic field. The authors use the measurements of electrons and escaping ions to estimate the rate of escape from the planet due to this process, finding a rate of 2x10^23per second which corresponds to almost 300 kg per day being lost from the Venus atmosphere. This is then compared with other solar system objects including planets, moons and comets - with the escape rate generally getting higher through these groups as the object size decreases. The authors conclude that understanding ion escape, including via this ambipolar process, is important for determining atmospheric evolution and the history of volatiles in the solar system.

Bottom Figure: Schematic of the observation of photoelectrons in the Venus tail. The magnetic connection between the ionosphere and the observation point is shown. The inset plot (Brace et al., 1987, with a representative Venus Express trajectory overlaid) shows the possible extension of ionosphere into the tail. From Coates et al. (2015)